Sector Investing: The Road From Here

I was listening to overpaid celebrity economists on the tube last night parsing the latest economic data and I was reminded of a remark by the late, great economist John Kenneth Galbraith. An adviser to several U.S. presidents going back to FDR, Galbraith once said of his profession: “Economics is extremely useful as a form of employment for economists.”

Put aside the absurd assertions you may have been hearing about imminent “hyperinflation” or “stagflation.” The pandemic-era economic recovery is uneven, but it’s moving forward. As the beginning of the third quarter looms on the calendar, now’s an opportune time for me to pinpoint the investment sectors that are shaping up to be the strongest performers over the next few months, as well as those that are expected to lag.

At least one thing is clear: monetary policy will remain accommodative into the foreseeable future. The Federal Reserve’s Federal Open Market Committee meeting, held June 15-16, is expected to result in the maintenance of dovish monetary policy, with short-term interest rates staying near zero.

Amid this easy money, the recovery continues (albeit fitfully). The Commerce Department reported Tuesday that retail sales fell more than expected in May. Consumers are rotating their spending toward services and away from goods, to take advantage of the reopening of venues such as bars and restaurants. Overall retail sales dipped 1.3% last month on a year-over-year basis.

It’s worth noting the sectors for which analysts are the most positive and negative heading into the third quarter.

At the sector level, the analyst consensus is the most optimistic about energy (64%), information technology (63%), health care (62%), and communication services (62%). These four sectors have the highest percentages of Buy ratings (see chart). 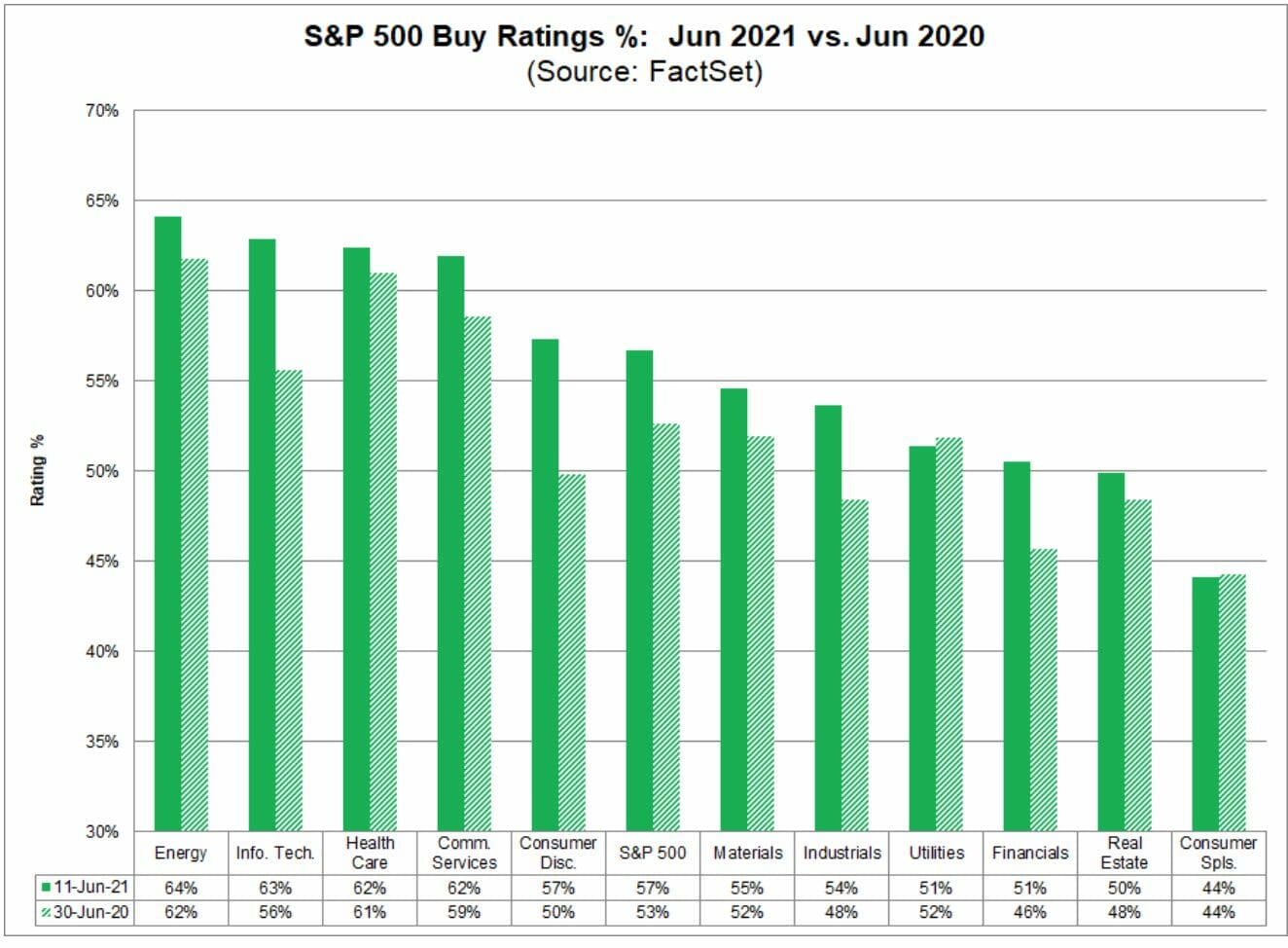 As you can see from the above chart, analysts are the most pessimistic about consumer staples, real estate, financials, and utilities.

Energy has transitioned over the past year from laggard to leader. The price of crude oil has been on the rise for several months, driven by reopening economies that have considerably boosted energy demand.

In its most recent monthly report, OPEC asserted that global oil demand will rise by 6 million barrels per day in 2021 from the lows of 2020, led by robust consumption in China and the U.S.

The OPEC report strikes an optimistic tone for the second half of 2021:

“The underlying assumption for the rest of 2021 is that by the beginning of 2H21, COVID-19 will be largely contained in the sense that the majority of the population in the advanced economies will be vaccinated and that the pandemic will not pose a major obstacle for major emerging economies by then.”

Soaring crude oil prices and a fast-mending economy are helping the energy sector post gains so far in 2021. An even stronger performance for energy equities probably lays ahead.

From Russia without love…

An industry that’s expected to maintain its momentum this year is aerospace/defense, considered a subset of the industrials sectors.

U.S. President Joe Biden and Russian President Vladimir Putin met Wednesday in Geneva for a one-day summit. In advance of the meeting, both leaders expressed wariness and made oblique threats. If you’re looking for a “Biden play” in 2021, aerospace/defense stands out.

International conflict is heating up, as Russia, China, North Korea and other antagonists of America test the resolve of the fledgling Biden administration. When the world becomes more dangerous, defense contractors get more money.

Biden has put Putin on notice, warning the Russian strongman that the Kremlin will pay the consequences for human rights abuses, cyberattacks, and meddling in American elections.

According to the latest data from the Stockholm International Peace Research Institute, the U.S. remains the world’s largest arms exporter. From 2016 to 2020, the U.S. accounted for 37% of global arms sales, versus 32% from 2011 to 2015.

During the five-year period ending in 2020, the U.S. supplied arms to 96 countries, 47% of which were in the Middle East. Saudi Arabia was the biggest customer. The White House proposed significant increases in the U.S defense budget for 2022.

The benchmark SPDR S&P Aerospace & Defense ETF (XAR) has generated a gain of 17% year to date, compared to 13.7% for the SPY (as of market close June 15). We face at least a decade of booming military expenditures in the U.S. and around the world.

The intensifying Russo-American rivalry will be a driver of defense spending, this year and beyond. If you’re an idealist, I hate to burst your bubble, but in many ways the Cold War never ended.

Editor’s Note: It’s under volatile conditions, such as those I’ve just described, that the acumen of my colleague Jim Fink shines. As chief investment strategist of Velocity Trader, Jim has developed a proprietary investing method that profits in bull or bear markets.

Jim’s “310F trade” makes money no matter what the Fed announces, how hot inflation gets, or what’s happening on the geopolitical stage. Want to learn about his next move? Click here for details.