Rough Road Ahead for Automakers

In April 2020, I shared the story of a friend that inherited $10,000. He wanted to “swing for the fences” with this money so he asked me for an investment recommendation.

At that time, the coronavirus pandemic had just sent the stock market down 40% and nobody knew where it was headed next. He is a self-described “car guy”, and we agreed that the automobile sector would rebound strongly once the pandemic subsided.

However, I did not think it would be wise for him to put all that money in a single stock. Instead, I recommended that he buy shares of the First Trust NASDAQ Global Auto Index Fund (CARZ).

Our timing could not have been better. Through the end of last week, CARZ had gained 134% over the past 14 months. 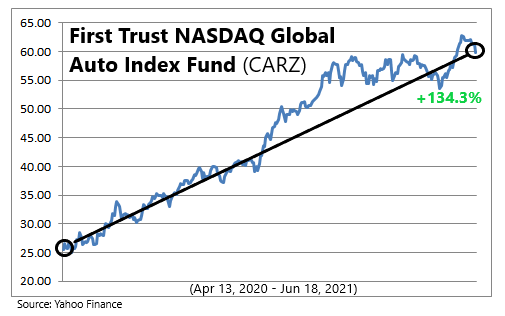 You might assume that most of that gain was due to a rebound in the overall stock market. It wasn’t. Over the same span, the SPDR S&P 500 ETF Trust (SPY) returned 52.9%.

In hindsight, it all seems so obvious. In April 2020, most automobile showrooms were closed due to the pandemic so new car sales dropped precipitously.

That month, total vehicle sales came in a little over nine million units. That was about 60% of the 17 million vehicles sold in April 2019 and the lowest figure in nearly 40 years.

The question wasn’t whether or not car sales would rebound, but how soon and at what rate would they recover. Turns out, it didn’t take nearly as long as many feared.

Within six months, total vehicle sales were back above 16 million. And in April of this year, that figure topped 19 million for the first time in sixteen years.

Last week, my friend asked me if it was time to sell his shares of CARZ. He noticed that since peaking above $62 two weeks ago, its share price has been gradually receding.

His concern is understandable. There are three factors now working against the auto sector that were not in place a year ago:

None of those factors, by itself, is sufficient to send the automobile sector into a tailspin. But the cumulative effect could be a pronounced drop in new car sales during the second half of this year.

In addition, there is the threat of rising interest rates due to rapidly escalating inflation. So far, auto loan rates are about the same as they were at the start of the year.

But if next month’s Consumer Price Index for All Urban Consumers (CPI-U) figure comes in higher than expected, we may see lenders start raising loan rates.

You don’t need a PhD in economics to predict what is likely to happen next. If the cost of building, driving, and financing a new car are all going up at the same time, demand for new cars will go down.

For all those reasons, I believe the risk of owning CARZ now exceeds the potential for further capital appreciation. It’s had a great run, but pretty soon it may hit the skids.

My friend is thrilled that he doubled his money in CARZ. However, the fact of the matter is that he could have done much better than that.

When I wrote that article 14 months ago, I said that if my friend “really wanted to make a bet on a recovery in the auto sector, he could buy call options on several of the major car companies.”

A call option increases in value when the price of the underlying security goes up. While some of the fund’s top holdings such as Ford (NSYE: F) and General Motors (NYSE: GM) were more than doubling during the past year, the call options on those stocks were appreciating by several times that amount.

Conversely, a put increases in value when the price of the underlying security goes down. If my hunch about the auto sector proves true over the remainder of this year, owning put options could prove lucrative. You can’t trade options on CARZ, but you can buy put options on most of the stocks that it owns.

Meanwhile, in my capacity as chief investment strategist of Mayhem Trader, I’ve pinpointed a coterie of overvalued technology stocks that face a day of reckoning. If you want to reap a windfall from their imminent fall, click here for details.