Whatever happened to the 3D printing revolution? A decade ago, just about any type of three-dimensional object you could imagine, including body parts, was believed to be capable of replication by a sophisticated copying machine hooked up to a computer.

That’s why shares of 3D Systems (NYSE: DDD) increased more than 20 times in value from 2010 through 2013. The company was at the forefront of 3D printing innovation.

Unfortunately, the reality of 3D technology did not live up to its promise. The cost of the equipment was prohibitively high for most users. Also, the quality of the finished products was often primitive and cheap.

Back then, 3D printing worked particularly well with objects made of plastic or rubber. Those materials are relatively inexpensive and can be easily molded into shape.

But if you wanted something more complex, you were usually better off outsourcing production to a manufacturer using traditional methodologies. The 3D printing revolution seemed to be over before it really got going.

As a result, DDD fell more than 90% from January 2014 to September 2020 when it traded below $5. At that point, the stock had a big short position as speculators anticipated the company’s impending demise. 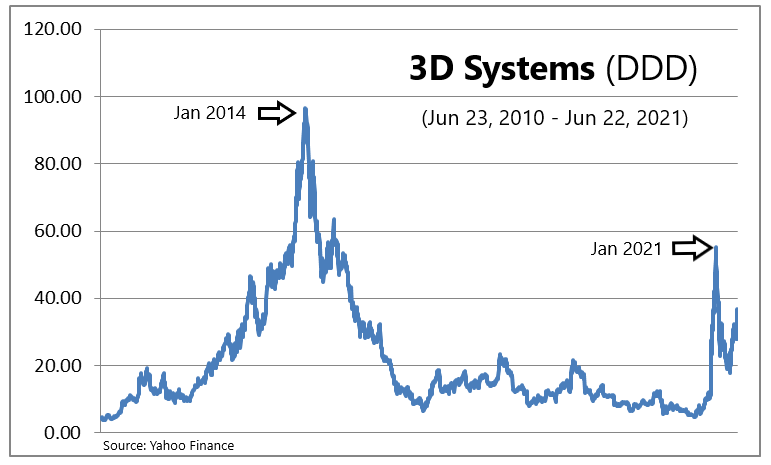 After that, DDD gradually fell back below $20 as the meme stock craze lost momentum. Until last week, it appeared that the stock was once again headed for single digits.

But then an unexpected upside catalyst occurred. On June 22, 3D Systems announced that it had entered into an agreement with CollPlant Biotechnologies (NSDQ: CLGN) “to deliver bioprinted solutions for improved breast reconstruction treatments.” The partnership will use 3D bioprinting to design and produce soft tissue that matches each patient’s anatomy.

Suddenly, 3D Systems isn’t just for meme stock traders looking to stick it to the short sellers on Wall Street. The company is now a legitimate biotech play on a medical condition that affects more than two million women annually.

That day, DDD jumped 27% to close above $36. Trading volume was more than eight times its daily average. It’s not hard to guess where a lot of that activity was coming from.

As of May 28, short sales amounted to more than 22% of DDD’s float (shares trading in the open market). Anything above 10% is considered high and vulnerable to a short squeeze if the stock rises fast.

It appears as if the meme stock traders will win this battle. Unlike GameStop and AMC Entertainment, 3D Systems now has a clear path to future profitability.

How soon that day arrives is hard to say, but it may not be that far off. During the first quarter of this year, the company booked an operating loss of only $2 million compared to an $18 million operating loss the year prior.

We will know a lot more on September 9 when 3D Systems hosts its annual Investor Day in Denver, Colorado. The company should have more good news to report in terms of restructuring its business to emphasize medical technologies.

If so, then DDD may still have a lot more upside potential left in it. This time, I think the meme stock traders got it right.

I’ll tell you who also got it right seven years ago when it came to DDD: me. In January 2014, I named 3D Systems as my best short sale idea when it rose above $90. Three months later, that position could have been closed out for a 100% gain.

This time around, I would recommend just the opposite and to buy a call option on DDD. A call option increases in value when the price of the underlying security goes up.

But first, I’d wait for the short sellers to cover their positions since the stock will probably drop a bit once they are done. After that, I’d like to see DDD level off for a few days before opening my position.

The 3D printing revolution may have gotten off to a rocky start. But now, it is poised to reap the benefits of a confluence of advancements in cloud computing, artificial intelligence, and robotics.

The story of 3D Systems illustrates a fundamental problem with the tech sector. Stocks that are in vogue tend to get bid up to unsustainable heights, only to crash as hard as DDD did seven years ago.

I think that is about to happen again to three tech stocks that have become grossly overvalued. I’ve written a special report that identifies them by name, which you can have for free. You can reap huge gains by taking advantage of their impending fall from grace. But you need to act now.