Pot Legalization? The Senate Says “No”

Allow me to introduce marijuana’s arch-nemesis. He goes by the alias of…Dr. No.

I’m referring to Senate Minority Leader Mitch McConnell (R-KY), the one man who is the biggest impediment to the legalization of marijuana on the federal level.

In the 50-50 Senate where the filibuster still holds sway, the Republicans can easily hold up Democratic initiatives, especially those that touch upon sensitive social issues such as marijuana legalization. Marijuana investors are frustrated by the lack of action in the Senate.

The flagship bill in Congress for marijuana legalization is the Marijuana Opportunity Reinvestment and Expungement (MORE) Act. First introduced in the House in the summer of 2019, MORE passed a full floor vote in December 2020, making history as the first bill to pass in Congress that lifts the federal ban on pot.

In May 2021, the MORE Act was re-introduced in the House and Democratic Senators in support of the bill have been stepping up the pressure, as the following tweet (posted June 23) attests: 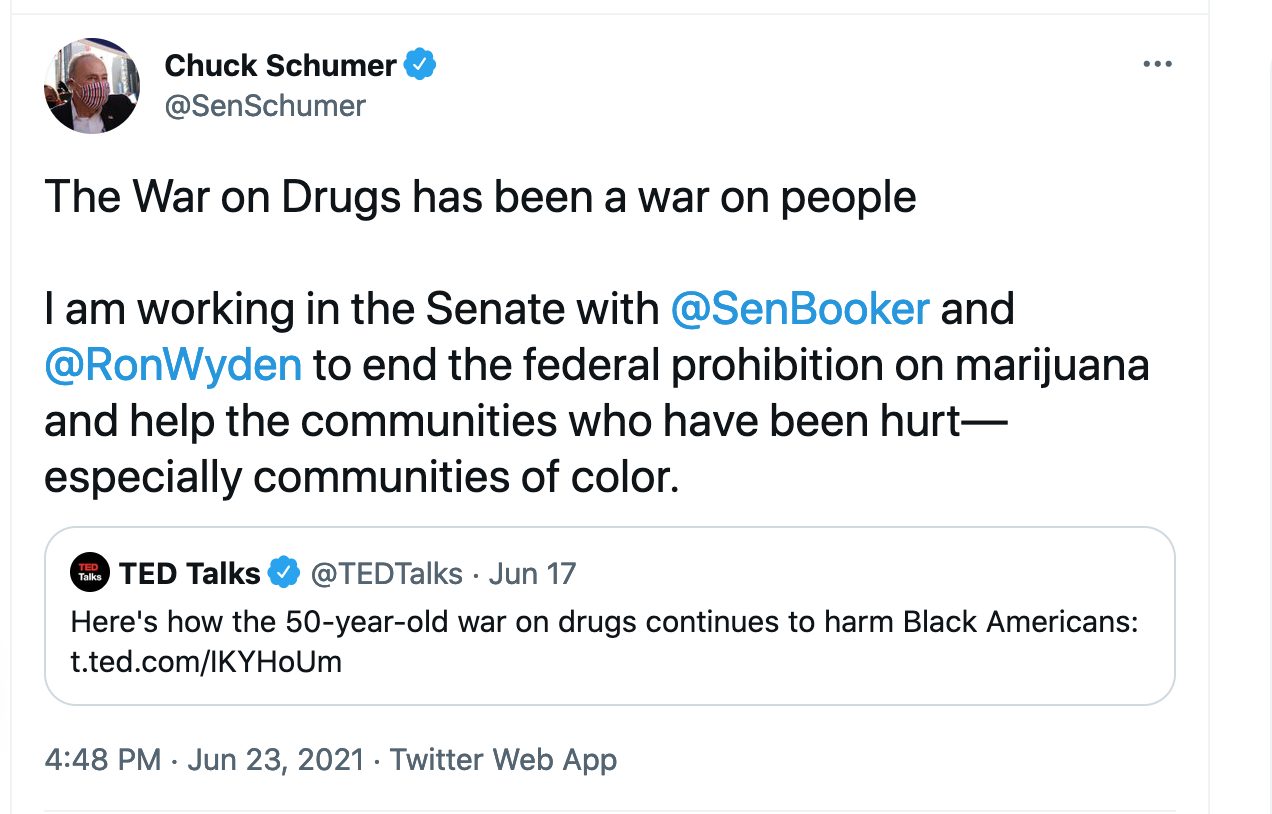 The results of the November 2020 election spawned optimism about MORE’s passage in the Senate. With the Democrats now in charge of the White House and both chambers of Congress, MORE seemed to be a slam-dunk.

However, in the wake of the election, partisan rancor has increased, not diminished. MORE’s momentum has stalled. The criminal justice aspects of MORE are proving to be the biggest stumbling block with Republican Senators.

The proposed law states: “The communities that have been most harmed by cannabis prohibition are benefiting the least from the legal marijuana marketplace. A legacy of racial and ethnic injustices, compounded by the disproportionate collateral consequences of 80 years of cannabis prohibition enforcement, now limits participation in the industry.”

The centerpiece of MORE is the removal of cannabis from the Controlled Substances Act. However, the bill also embraces progressive causes that are anathema to conservative GOP Senators.

MORE would facilitate the expungement of past convictions, and tax cannabis products at 5% to fund criminal and social reform projects, including an Office of Cannabis Justice within the Department of Justice, responsible for administering grants to aid communities adversely affected by the war on drugs. MORE also would prohibit the denial of any federal public benefits (e.g., housing) on the basis of cannabis use.

Minority Leader McConnell has vowed to block all Democratic initiatives, as we saw on June 23 when a voting rights bill died in the Senate due to GOP obstruction. McConnell is expressly against marijuana legalization, but until recently pot advocates had held out hope that he was changing his mind.

McConnell’s quiet meetings at the end of last year with cannabis lobbyists seemed a good sign, but pessimism is reigning again as he once again inveighs against MORE. The excellent chance that their party will reclaim Congress in the 2022 midterms is causing Republican leaders to dig in their heels on a range of Democratic-supported bills.

McConnell also has voiced strenuous objection to the Secure and Fair Enforcement (SAFE) Banking Act. Approved along largely bipartisan lines in the House, SAFE now languishes in the Senate.

Among other things, SAFE would prevent federal regulators from penalizing banks because they lend to marijuana companies. Banking lobbyists are pressuring the Senate to pass the bill, but McConnell has marshalled his caucus against SAFE, calling the bill part of a “left-wing wish list.”

It was Schumer who gave McConnell the nickname “Dr. No” and it has gained wider currency with the media. The Senator from Kentucky seems to relish the role.

However, GOP members of the House are proving friendlier to marijuana legalization than their colleagues in the Senate. On May 12, two House Republicans introduced a new bill to lift the federal ban on marijuana.

In addition to removing the federal ban, the bill seeks to protect banks that service state-legal cannabis businesses. It also wants to ensure that military veterans are permitted to use marijuana in compliance with state laws.

Despite the obstacles to federal legalization, the normalization of marijuana laws continues apace at the state level.

As you can see, the states aren’t waiting for the feds to get their act together. Looking to profit from marijuana legalization? Every retirement portfolio should have at least one marijuana stock.

Our stock-picking experts have unearthed hidden marijuana industry gems that most investors don’t even know about. For our latest research on the best pot stocks, click here.