The LOW-Down on Generating High Income in Retirement

Last weekend, I met up with my cousin to bicycle along the Indian Head Trail in Southern Maryland. It is easy to forget that you are only 30 miles from downtown Washington DC when you are riding through natural wetlands that are home to a wide variety of wildlife.

After the ride, we hit a local barbeque joint for lunch. Over a couple of beers, my cousin told me that she will be retiring at the end of this year. At that time she will be 60 years old so she won’t be able to access her Social Security and Medicare benefits for several more years.

Fortunately, she has nearly $500,000 of common stock in Lowe’s Companies (NYSE: LOW) to fall back on. Early in her career, she was a store manager for Lowe’s and accumulated stock through their ESOP (employee stock ownership plan).

Over the years, she has sold off some of those shares to buy a house and pay for a new car. The stock has split two-for-one five times since 1992 so she now has considerably more shares than she started with.

Even better, LOW has appreciated tremendously since she acquired her shares. On a split-adjusted basis, she acquired most of her shares for less than $1 each during the 1980s. Seven weeks ago, it traded above $215 to hit a new all-time high. 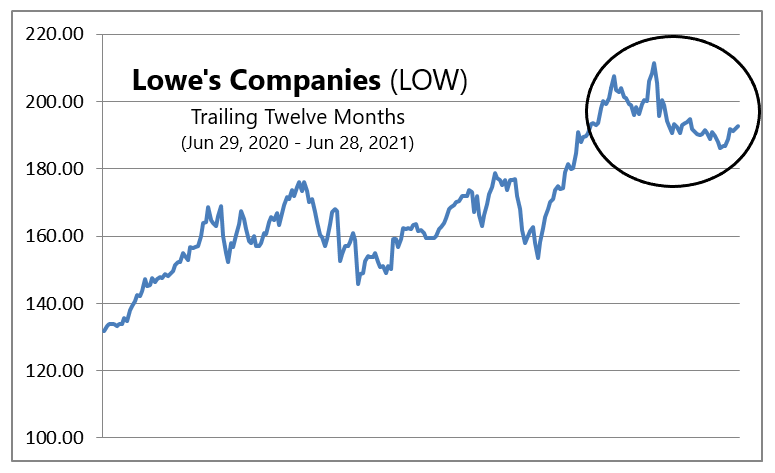 Since then, LOW has pulled back below $200 as the “shelter in suburbia” trade loses momentum (circled area in the chart above). The economy is opening back up and consumers want to start taking vacations again. That’s good news for the travel industry and bad news for home improvement stores.

My cousin wants to know whether she should sell her Lowe’s stock, so she can reallocate that money into a diversified income portfolio. Once she quits working, she’ll need to replace her paycheck with withdrawals from her investment account.

Lowe’s next quarterly cash dividend payment of 80 cents per share equates to a forward annual dividend yield of 1.7%. That is only slightly higher than the 1.5% yield on the 10-year Treasury note.

My cousin reckons that she will need to take withdrawals at a 6% rate to cover her monthly living expenses. Not that long ago, she could have accomplished that with a mix of corporate bonds, preferred stocks, and high-yield common stocks.

Not anymore. Last week, the iShares iBoxx $ High Yield Corporate Bond ETF (HYG) was paying an annual dividend yield of 4.6%. That fund only owns “junk bonds” rated BB or less. Not exactly what you want in retirement when that is your only source of income.

She could do a little better with the Invesco Preferred ETF (PGX), which pays an annual dividend yield of 4.9%. However, nearly all of its holdings are rated BBB or lower, so there is a lot of risk in that portfolio, too.

As for common stocks, the SPDR Portfolio S&P 500 High Dividend ETF (SPYD), yields 4.7% on an annual basis. Over half of its holdings are in the financial services, real estate, and energy sectors. If the economy goes in the tank, those businesses could take a beating.

So what should my cousin do? The answer I gave her may surprise you. I suggested that she not sell any of her Lowe’s stock. That way, she can write covered call options against those shares.

Here’s how that works. She can sell to someone else the right to buy her shares of LOW at a specified price within a certain timeframe. If LOW rises above that price by the time that option expires, those shares will be called away from her.

In that case, she is no worse off than if she sold them now. However, she is better off by the amount of the options premium she would receive now by entering into that contract. For example, last week while LOW was trading near $194, the call option that expires on January 21, 2022, at the $200 strike price could be sold for $12.

That equates to 6.2% of the current share price. But that is for a holding period of 208 days. On an annualized basis, that works out to an options yield of 10.9%.

If LOW never rises above $200 by the time this option expires, she gets to keep her shares and write a new covered call contract against those same shares. She also gets to keep any dividends paid by Lowe’s while she is the owner of those shares.

If those shares do get called away from her, she can use that cash to buy other stocks against which she can write more covered call contracts. Lowe’s is far from the top of the list of stocks with high covered call option yields. It just happens to be the stock that she currently owns.

Make risk work FOR you…

Of course, the markets aren’t risk free right now. Case in point: The red-hot NASDAQ currently hovers at a record high. Some technology stocks are great buys now. But many others aren’t. In fact, there’s a slew of much-hyped “story stocks” in the tech sector that are overbought and poised for a tumble.

As chief investment strategist of Mayhem Trader, I’ve pinpointed the most vulnerable stocks in the tech sector. I’ve also devised a simple way to profitably leverage their imminent decline. To learn about my next “mayhem” trade, click here.