A year ago, I noted the spike in Chinese electric vehicle (EV) manufacturer Nio (NYSE: NIO). At that time, NIO had more than tripled in value in just six weeks.

That big move drove its share price above $12. As I said then, “a run on EV stocks is on and apparently nobody wants to be left out.”

Turns out, that was only the beginning. Last week, NIO rose above $50 to more than quadruple in value over the past 12 months. 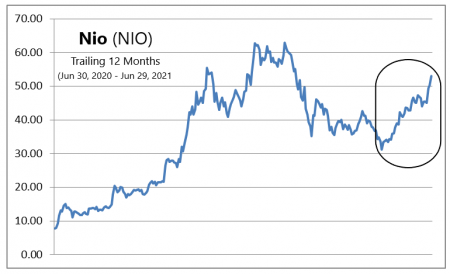 Actually, that isn’t the first time this year that it has gone on a tear. In January, NIO soared above $60 when the entire EV sector caught fire. Shares of Tesla (NSDQ: TSLA) touched $900 to achieve a gain of more than 1,100% in less than a year.

For a little while, it appeared that no price was too high to pay for an EV stock. But then reality set in. All of the major automobile manufacturers announced their intentions to enter the EV market in a big way.

Since then, Tesla has cooled off. By May, its share price had fallen beneath $600 while NIO was back below $35.

But recently, Nio has reignited and this time it appears to be due to the same meme stock traders that have pushed GameStop (NYSE: GME) and AMC Entertainment (NYSE: AMC) to unfathomable heights.

So why are the meme stock traders suddenly so interested in Nio? Normally, they prefer a failing business with a big short position so they can induce a short squeeze.

That is not the case with Nio. The company makes a viable product in a rapidly growing market. For that reason, short sellers have mostly avoided Nio. As of June 15, the amount of Nio stock sold short was less than 4% of all the shares outstanding.

What Nio does have is a strong following on the social media website Reddit. As noted by Fortune last week, “Nio was the 12th most mentioned stock in the past 24 hours” on the ‘r/WallStreetBets’ subreddit channel where stock traders exchange investment ideas.

In this case, the driving force behind Nio’s recent rise is the belief that July 9 will be a big day for the stock. That’s when the company will host its annual “Power Day,” at which time it will discuss advancements in the battery technology that power its vehicles.

That news better be good. Thus far, Nio has not turned a profit nor is it expected to do so anytime soon. In May, the company delivered fewer than 7,000 vehicles. That’s below the more than 10,000 EVs sold by Ford (NYSE: F) during the same period. Granted, Ford has a much bigger distribution network to work with. But Ford also sells a lot of non-EVs through that same network.

The circumstances surrounding Nio demonstrate that the meme stock phenomenon is no longer restricted to small-cap stocks operating in underperforming sectors of the economy. Just the opposite appears to be the case.

What the meme stock traders are looking for now are trendy companies in high-growth sectors of the economy. Throw in a news peg, such as Nio’s Power Day, and you have all the ingredients necessary to drive a stock through the roof.

I will be watching NIO closely to see how it performs after July 9. If the company does not announce a major breakthrough in battery technology, its share price could be vulnerable to a quick selloff.

So far, the options market does not anticipate much of a decline in NIO over the next month. The put option that expires on July 16 at the $53 strike price could be bought last week for less than $3 (a put option increases in value when the price of the underlying security goes down).

That means this option will be profitable if NIO falls below $50 within a week after its Power Day presentation. But if NIO comes through with a major announcement, this option could expire with no value.

In addition to NIO, I know of several other high-flying stocks that are due to take a big fall soon. The red-hot NASDAQ currently hovers at a record high. In fact, there’s a slew of much-hyped “story stocks” in the tech sector that trade at nosebleed levels and they’re poised for a tumble.

It’s starting to look like 2000 all over again. After pinpointing the most vulnerable stocks in the tech sector, I’ve devised a simple way to profitably leverage their imminent decline. To learn about my next “mayhem” trade, click here.