At a press conference on June 30 in Austin, Texas, next to a bronze statue of local hero Willie Nelson, a newly formed Texas lobbying group announced a campaign to put an initiative to decriminalize marijuana possession and ban no-knock warrants on the ballot in Austin.

Ground Game Texas, a nonprofit spearheaded by former Democratic congressional candidates, vowed that the Austin ballot initiative would be the first of many similar efforts across the Lone Star State.

Read This Story: The Eyes of Texas Are Upon Legalization

Austin and Dallas already have enacted changes in municipal law enforcement policies to reduce arrests for marijuana-related offenses. The police in those cities are directed to hand out citations and summons for pot use, instead of criminal penalties.

However, Ground Game Texas has even more ambitious plans (see the following tweet). 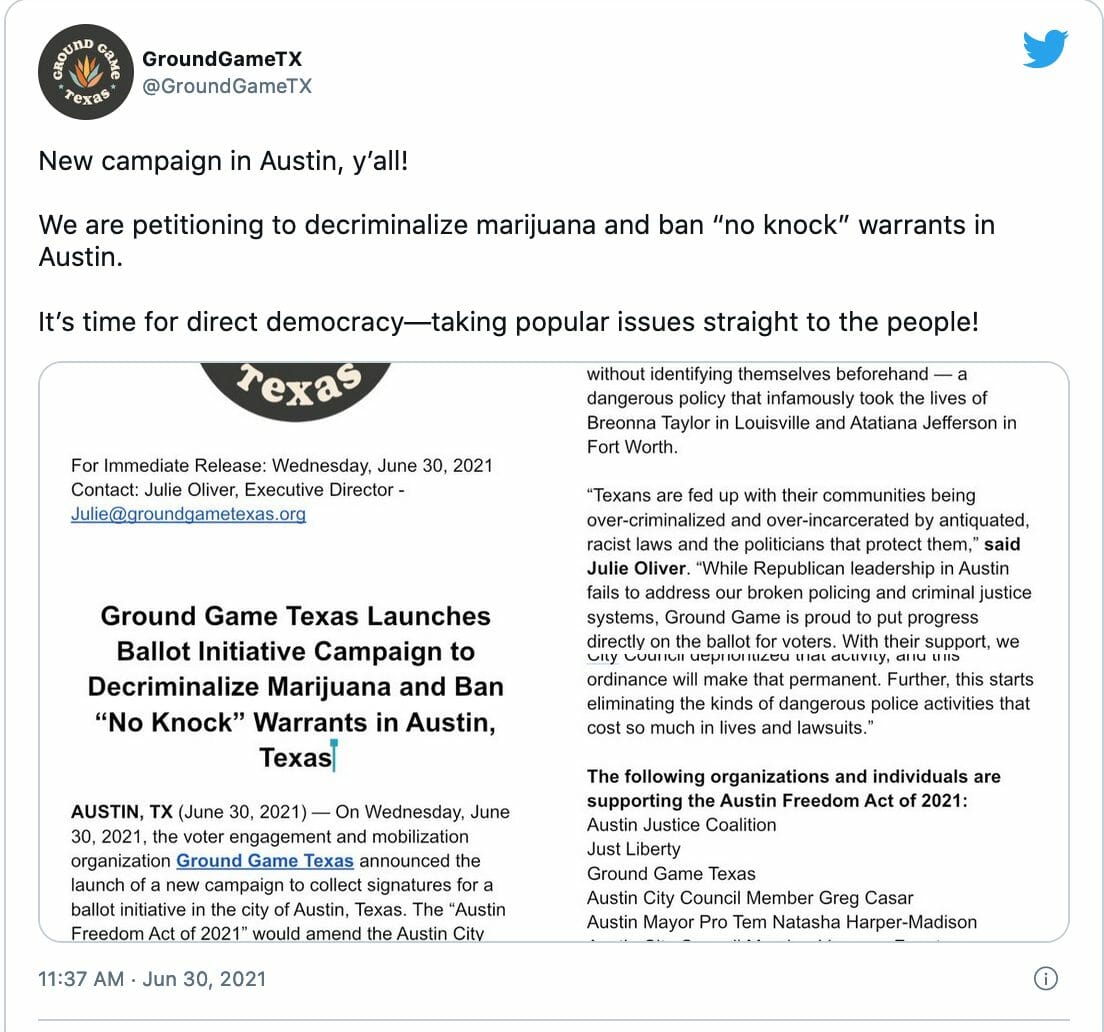 If the marijuana pressure group and its allies succeed in the state capital of Austin, the consequences would likely reverberate throughout the country.

The “Austin Freedom Act” seeks to end arrests and citations for misdemeanor marijuana possession within the city. Also, the act stipulates that police can’t issue citations for residue or paraphernalia in lieu of a possession charge.

To qualify for the November 2021 ballot, Ground Game Texas will need to collect at least 20,000 valid signatures by July 20. An official of the group attested during the press conference Wednesday that they already have secured roughly 3,000 signatures.

The initiative’s ban on no-knock warrants for any crime, even if it doesn’t involve marijuana, has deeper social significance. No-knock home invasions have become a controversial topic, in the wake of accidental deaths of innocent suspects during ineptly executed drug raids.

The reform of marijuana laws isn’t just about making pot accessible; it’s about ending the War on Drugs by which law enforcement has disproportionately targeted minorities and the poor.

Two-thirds of American voters think that the War on Drugs has been a failure and should immediately cease, according to a new poll released June 9 by the American Civil Liberties Union and Drug Policy Alliance.

“In past years, Austin police issued thousands of citations and made hundreds of arrests for marijuana possession. These disproportionately targeted Black and Hispanic community members. To promote justice and avoid waste of tax dollars, we want to redirect resources towards real public safety solutions.”

By turning out voters on issues such as marijuana decriminalization, Ground Game Texas also could influence the outcome of elections and perhaps tilt “red state” Texas closer to the blue camp. In addition, success in Austin would encourage other marijuana activists in the country, especially those in conservative southern states where the cause can seem hopeless.

In a separate move June 18, Governor Greg Abbott (R) of Texas allowed legislation that will require the state to study the therapeutic benefits of psilocybin and other psychedelics to become law without his signature.

Texas isn’t alone in the effort to put cannabis on local ballots. Pro-marijuana activists in Ohio recently qualified a measure to decriminalize cannabis to appear on a local 2021 ballot. Activists also are working to put marijuana initiatives on local ballots in South Carolina and West Virginia. These are Republican-dominated states, but the chances that pot reformers will prevail are good.

The developments I’ve just described underscore the appeal of the marijuana industry as an investment. If deeply conservative states such as Texas are making major efforts to lift restrictions on marijuana and other psychotropics, you know cannabis investments enjoy tremendous tailwinds. For our latest research on the best pot stocks to own now, click here.