It seems like just about everyone has a love/hate relationship with social media giant Facebook (NSDQ: FB). The company’s co-founder and CEO, Mark Zuckerberg, is equally reviled by industry peers, government regulators, and Wall Street analysts for his sometimes ruthless and arrogant manner.

Nevertheless, Facebook’s shareholders don’t have much to complain about. Since going public at $38 nine years ago, FB has appreciated more than nine times in value. 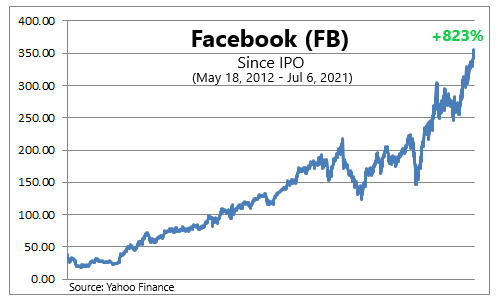 Six years ago, I described Facebook as “The $245 Billion Experiment.” At that time, Facebook had soared in value to become the tenth most valuable company in America. Since then, it has quadrupled in value to reach a market cap of $1 trillion and now ranks fifth.

One reason why Facebook continues to thrive is that it has little direct competition. Sure, there are other social media companies such as Twitter (NYSE: TWTR) and Snap (NYSE: SNAP). But none of them provide as robust of a platform as Facebook.

I think that is about to change. Last week, an email arrived in my inbox that could be a shot across Facebook’s bow. If I am right about that, then Mark Zuckerberg may finally get the comeuppance that so many have been wishing on him for so long.

It wasn’t until my wife and I moved back to my hometown of Alexandria, Virginia six years ago that I became aware of the social media app Nextdoor. At first, I didn’t pay much attention to it. But over time, I found myself using it more and more.

Unlike Facebook, where the emphasis is on connecting with people you already know, Nextdoor wants you to get to know your neighbors. Similar to Facebook, you create a user profile with a picture so your neighbors have an idea of who you are.

On Nextdoor, a typical message stream will include updates on local events, pleas to help find lost pets, and requests for restaurant recommendations. You can also list household items for sale and create groups that share a common interest.

In that regard, Nextdoor is not much different from Facebook. But where Nextdoor is different is in the generally positive vibe to how users interact with one another. Trolling is out and encouragement is in.

I find that aspect of the Nextdoor app refreshing and I suspect a lot of other people do, too. If I want to get depressed I can turn on the news. But if I want to know what good things are happening in my community, I go to the Nextdoor app.

Although Nextdoor is not yet publicly traded, there is a way you can participate in its future performance right now. That’s because the company has agreed to merge with a special purpose acquisition company (SPAC) instead of having a traditional initial public offering (IPO).

On July 6, Nextdoor announced that it will be acquired by Khosla Ventures Acquisition Co. II (NSDQ: KVSB). Once the deal is finalized later this year, the SPAC will change its name to Nextdoor and start trading under the symbol “KIND.”

It looks like some investors are not going to wait until then to act. Shares of KVSB jumped 10% to $11 the day after the Nextdoor deal was announced. By the time this deal is consummated, KVSB could be trading a lot higher once more people realize that there is now a viable alternative to Facebook.

At the moment, no one at Facebook seems to be losing any sleep over Nextdoor. Wall Street doesn’t seem to care, either. In the hours after Nextdoor announced it will become a publicly traded company, FB tacked on another $10 billion of market cap.

The one dark cloud hanging over this deal is the heightened scrutiny of SPAC offerings. These deals do not require the same level of disclosure as an IPO. Industry regulators are concerned that investors may end up losing money on flimsy deals with little business substance.

That is not the case with Nextdoor. It is a viable business in a market segment that is growing fast. According to the company, it is “in more than 275,000 neighborhoods across 11 countries. In the U.S., nearly 1 in 3 households use Nextdoor.”

Of course, it won’t be easy for Nextdoor (or anyone else) to dethrone Facebook as the world’s most popular social media platform. Facebook has nearly two billion daily active users. That works out to about one in four of every human beings on the planet.

But as another tech titan, Jeff Bezos of Amazon.com (NSDQ: AMZN), famously said, “Your margin is my opportunity.” And right now, Facebook’s margin is Nextdoor’s opportunity of a lifetime.

Editor’s Note: Our colleague Jim Pearce just provided investment insights into the ever-changing world of social media. Nextdoor might be a lasting and profitable opportunity, but at the same time, there’s seemingly no end to Wall Street’s investing fads.

Maybe you’re risk averse and you’re leery of meme stocks, crypto, SPACs, and complicated trading strategies. Well, you can keep it simple, with these five safe, high-yielding stocks. You may never have to worry about what the market is doing again!

These “Bulletproof Buys” have weathered every dip and crash over the last 20 years and still hand out massive gains. One of these companies hasn’t missed a single dividend since Richard Nixon was in office…and it’s still a buy! Click here for details.