This annual report is one of the most important sources of global energy data. Many companies, governments, and non-governmental organizations (NGOs) use this data to make decisions, so it’s important to familiarize ourselves with the review’s findings.

I will add a caveat regarding this year’s review. Typically, the review gives us a comprehensive summary of energy trends. However, the COVID-19 pandemic upended the energy markets in 2020, and we shouldn’t extrapolate some of these trends.

For example, as I will detail below, oil demand fell dramatically last year, but we already know that it has largely recovered in 2021. So it would be a serious mistake to think that last year’s plunge marks the beginning of long-term trends.

Primary global energy consumption fell by 4.5% last year, which was the largest annual decline since 1945. About three-fourths of the decline came from oil, as the pandemic dramatically impacted the world’s transportation systems. Small declines were also seen in coal, natural gas, and nuclear consumption, while renewables and hydropower recorded gains.

Cumulatively, fossil fuels (shown below in shades of gray) still accounted for 83.1% of the world’s primary energy consumption in 2020. 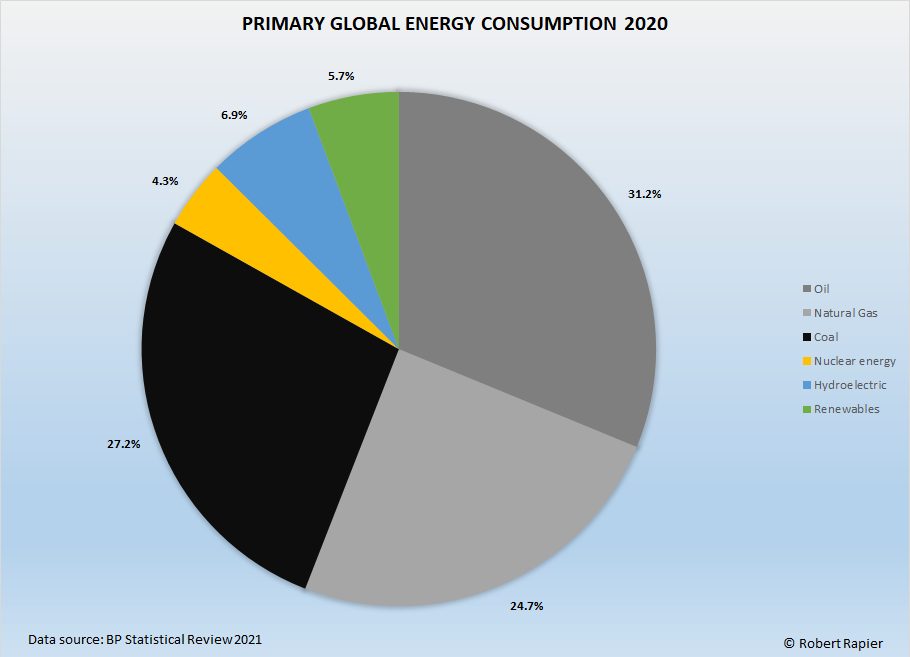 China was one of the rare exceptions, growing energy consumption by 2.1% over 2019. Still, that was well below the 3.8% average growth over the previous 10 years.

Carbon dioxide emissions fell by 6.3%. As with energy consumption, this was also the largest decline since 1945, and put annual emissions back at levels last seen in 2011. But as the report noted, “the rate of decline in carbon emissions last year is similar to what the world needs to average each year for the next 30 years to be on track to meet the aims of the Paris Agreement.”

Oil still accounts for nearly a third of the world’s energy consumption. In 2020, the world consumed 88.5 million barrels per day (BPD) of oil. This was 9.3% lower than consumption in 2019, and was approximately equivalent to 2012 oil consumption levels.

Natural gas has been the fastest-growing fossil fuel in recent years, with a global 2.9% average annual growth rate over the past decade.

Nevertheless, natural gas didn’t manage to buck the trend in 2020. Global natural gas consumption declined by 2.3%. This marked the largest decline in natural gas demand on record, and only the third annual decline seen since 1965.

In 2020, the U.S. remained the global leader in both natural gas production and consumption.

Once again, China bucked the trend, and increased coal consumption by 0.3%. China’s coal consumption remains near all-time high levels, and China remains by far the world’s largest producer and consumer of coal, with a >50% global share in both categories.

Solar electricity consumption rose by a record 1.3 exajoules (EJ), an increase of 20%, but wind power (+1.5 EJ) provided the largest contribution to renewables growth.

Last year’s increase in solar and wind capacity was staggering, particularly in light of the pandemic. Solar capacity increased by 127 gigawatts (GW), while wind capacity grew 111 GW. The growth in wind capacity was nearly double the highest prior annual increase. Together, wind and solar power now have a global capacity of 1,441 GW. For perspective, in 2010 that number was 221 GW.

Nuclear consumption fell in 2020 by 4.1%, but that was on the heels of a rapid increase from the previous year. The U.S. remains the world’s largest consumer of nuclear power, with a 31% share of the global total. South Africa (+13.7%), South Korea (+9.1%), and China (+4.3% had the fastest growth rates in nuclear power in 2020, but China’s consumption increase was the world’s largest.

How should investors view BP’s latest data? As I stated near the top of this article, we must take this year’s review with a grain of salt. We can’t expect the trends in fossil fuels to continue, and certainly not at the 2020 pace. Investors should avoid coal companies, but companies that produce, transport, or sell oil and natural gas should fare well for the foreseeable future.

In addition, I think it’s more than obvious that the growth story for wind and solar power has many years to run. These two sectors are worthy of some of your investment dollars. This will be especially true if the world continues to electrify its transport systems as expected. There will be a substantial increase in demand for electricity, and renewables will be called upon to bear an increasingly heavy load.

Editor’s Note: Energy expert Robert Rapier just provided you with invaluable investing advice. But his article only scratches the surface of the expertise at Investing Daily.

Consider our colleague Jim Pearce, chief investment strategist of Mayhem Trader. Jim knows of several high-flying stocks that are due to take a big fall soon. The red-hot NASDAQ currently hovers at a record high. However, there’s a slew of much-hyped “story stocks” in the tech sector that trade at nosebleed levels and they’re poised for a tumble.

After pinpointing the most vulnerable stocks in the tech sector, Jim has devised a simple way to profitably leverage their imminent decline. To learn about his next “mayhem” trades, click here.