The informational overload in our 24/7 fiber-optically connected world can lead to what the shrinks call “analysis paralysis” (i.e., overthinking that results in inaction).

My advice is to ignore the incendiary social media posts, the cable news fearmongering, and the carnival barkers in Washington. Second-quarter earnings season is underway. As an investor, that’s where you should focus.

Corporate earnings season is when the rubber hits the road. First out this week are the “big boys” of banking. The financial services sector is a barometer for the wider economy and so far, the numbers are bullish. I’ll get to Q2 banking profits in a minute. First, let’s look at the latest inflation scare, and why you should stay calm.

The U.S. Labor Department reported Tuesday that inflation rose in June at its fastest pace in nearly 13 years, as prices soared for energy, food, and items such as used cars and trucks.

The consumer price index (CPI) last month jumped 5.4% on a year-over-year basis, the biggest jump since August 2008, at the cusp of the great financial crisis. The consensus expectation had called for a 5% gain (see chart). 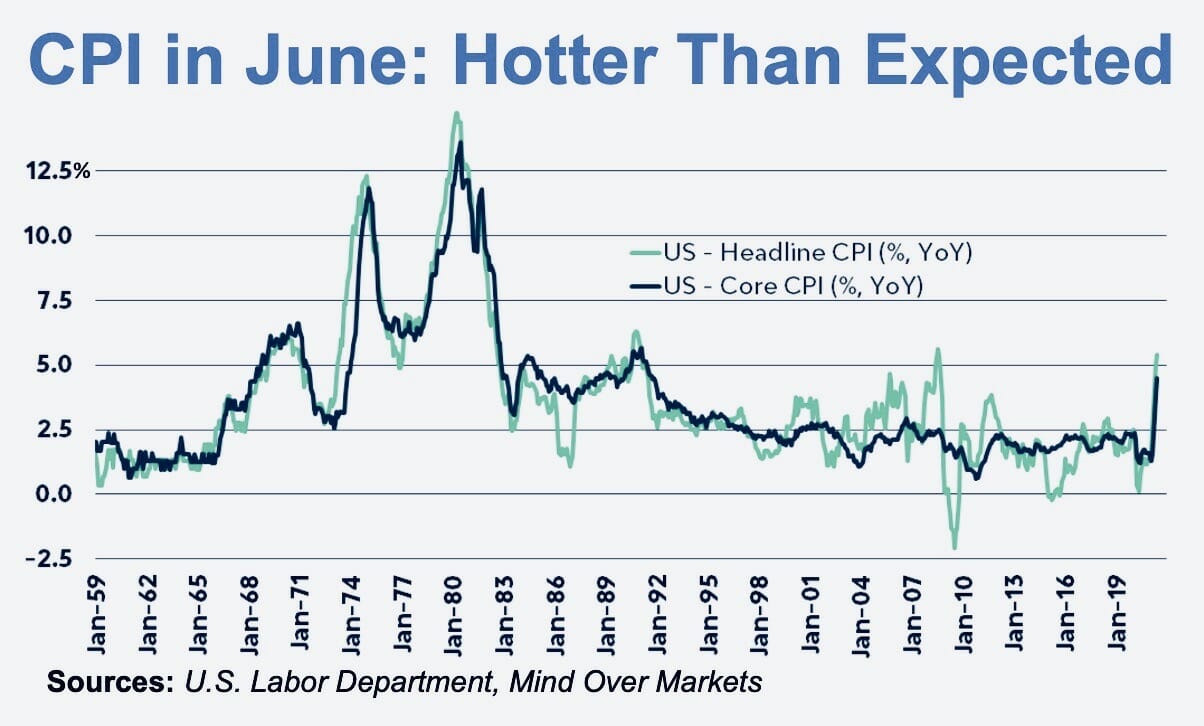 The core CPI (which excludes volatile energy and food costs) climbed 4.5%, the sharpest move for that measure since September 1991 and well above the estimate of 3.8%. On a monthly basis, headline and core prices rose 0.9% against 0.5% estimates.

At first glance, the CPI report appears shocking, but if you look beneath the numbers, you’ll see that a third of the increase stemmed from used car and truck prices, a factor consistent with the Federal Reserve’s stance that recent inflationary spikes are transitory.

A supply crunch in new cars, caused by a shortage of microchips, is boosting demand for used models. However, as these pandemic-induced supply imbalances get solved, used vehicle prices should decline (just as prices eventually declined for lumber).

Watch This Video: Inflation Hedges Are Gaining in Popularity

Investors are scooping up inflation hedges as a precaution, but runaway inflation isn’t likely. Powell on Tuesday and Wednesday is expected to advise Congress to remain patient as the economy heals from the pandemic.

Bank earnings tend to establish the tone for the season and the overall economy. So far, the big banks have released earnings that have blown away expectations. Bank balance sheets have benefited from falling unemployment, strong consumer spending, and rising oil prices (deteriorating energy loans can drag down a bank’s portfolio).

JPMorgan, Bank of America, Citigroup, and Wells Fargo are the big four money center banks in the U.S. The four banks hold about 45% of the deposits in the country.

Banks as a whole sharply boosted their provisions for loan losses in the first half of 2020, in response to economic damage from the coronavirus pandemic. Now that lockdowns are getting lifted and the economy is recovering, banks are reducing loan loss provisions. Thanks to aggressive monetary and fiscal stimulus, many feared economic scenarios didn’t happen.

According to FactSet, the financials sector is expected to report the third-highest year-over-year earnings growth rate for Q2 of all 11 S&P 500 sectors, at 119.5%. The industrials sector comes in at number one (349.7%) and consumer discretionary at number two (207.7%).

Hence the recent outperformance of the financials sector. The benchmark Financial Select Sector SPDR Fund (XLF) has generated a year-to-date daily total return of 26.77%, compared to a total return of 17.58% for the SPDR S&P 500 ETF Trust (SPY), as of market close July 13.

Bank stocks were among the worst performing stocks during the nadir of the pandemic in 2020, but they’ve bounced back this year amid the economic recovery. The rally in bank stocks will likely continue this year, as consumers and businesses get back on their feet.

Among the major economic reports scheduled for release this week are initial jobless claims (Thursday), and retail sales and consumer sentiment (Friday). These key indicators are likely to confirm that the bullish case remains intact.

Editor’s Note: As I’ve just explained, banking is a barometer for the overall economy, and so far the sector’s earnings performance bodes well for the future direction of the markets.

Meanwhile, as you’ve doubtless discovered, there’s seemingly no end to Wall Street’s crazy investing fads. Well, you can forget meme stocks, crypto, non-fungible tokens, and other exotic investments. Keep it simple, with these five safe, high-yielding stocks. You may never have to worry about what the market is doing again.

These “Bulletproof Buys” have weathered every dip and crash over the last 20 years and still hand out massive gains. One of these companies hasn’t missed a single dividend since Richard Nixon was in office…and it’s still a buy. Click here for details.