Regular readers of this column know that I am following cruise ship operator Carnival (NYSE: CCL) closely. That’s because the cruise industry is especially vulnerable to the coronavirus pandemic.

By its very nature, cruising combines the essential elements that contribute to the spread of a virus. Thousands of people share meals and social activities in close quarters. Along the way, they debark at exotic ports where they intermingle with strangers. Then, they get back on their ship and repeat that process for days on end.

For that reason, the cruise industry was shut down during the second half of last year and the first half of this year. Only now is it slowly getting back up to speed.

As I noted four months ago, Carnival has been losing more than $500 million every month for the past year. Nevertheless, on June 2 CCL closed above $31, its highest share price since the onset of the pandemic. 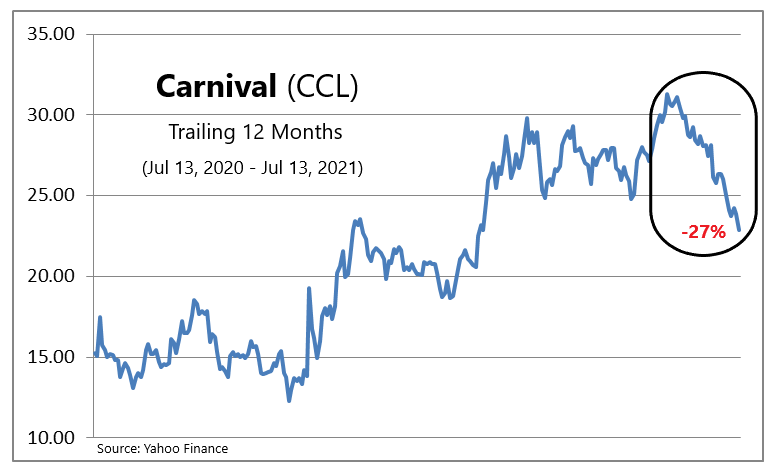 Since then, CCL has given up more than a quarter of its value (circled area in the chart above). The problem is not a drop in demand for cruises. According to Carnival, “cumulative advanced bookings for full year 2022 are ahead of a very strong 2019.”

The problem is the increasing concern that not all of those bookings will be fulfilled. The Delta variant of COVID-19 is spreading rapidly in the United States, especially in states with low vaccination rates.

The nexus for the cruise industry in the U.S. is Florida. That is from where most cruises debark and where Carnival is headquartered. In a typical year, the cruise industry pumps roughly $9 billion into Florida’s economy and accounts for more than 150,000 jobs.

As you might expect, protecting the cruise industry is a political priority in Florida. On May 3, Florida Governor Ron DeSantis (R) signed a bill that bans requirements for vaccine passports for passengers to board cruise ships in his state.

At that time, the coronavirus pandemic appeared to be fizzling out. But the troubling rise in COVID-19 cases since then has created a quandary for the cruise industry that could have repercussions throughout the world.

The concern is not only for the health of the passengers and crew of those ships but for everyone that will come into contact with them. After the sacrifices made and costs incurred during the past year to contain the pandemic, nobody wants to see severe social distancing restrictions reimposed this year.

The good news is that nearly half of the U.S. population is fully vaccinated for COVID-19. The bad news is that the national vaccination rate of 49% is well below the 80% level deemed necessary to achieve herd immunity.

That puts the cruise industry in a difficult position. Another delay in resuming cruises could trigger a wave of bond defaults that ultimately force some companies into bankruptcy.

On July 4, Carnival launched its first cruise from its home base at PortMiami in over a year. Ribbons were cut, balloons were launched, and fireworks filled the sky.

Beneath the optimistic façade is a growing concern that it may only be a matter of time until the cruise industry must once again suspend operations. If that happens, then Carnival will need to do everything it can to retain capital to remain afloat.

On July 15, news broke that Carnival intends to refinance bonds issued during the height of the pandemic in an effort to reduce its borrowing costs. The company hopes to replace $2 billion of debt issued with an 11.5% interest rate with new bonds paying around 4%.

If successful, the bond swap would save Carnival about $150 million annually in interest payments. That will help, but that equates to about one week of the company’s burn rate during the height of the pandemic.

That won’t be nearly enough to save the company if it has to once again shut down operations. Instead, it will need help from the equity markets to keep its head above water.

Perhaps the meme stock traders that rushed into CCL at the start of this year will once again come to its rescue. Short interest in the stock is roughly 9% of the float, which may be high enough to induce a short squeeze.

But if the meme stock traders decide to stay away from Carnival this time then it may be in for a rough stretch. The next six months could decide the company’s fate, and right now nobody knows which way this voyage will end.

In the meantime, I advise you to forget risky assets like meme stocks. Keep it simple. Our investment team has pinpointed five safe, high-yielding stocks that you need to buy now.

You can think of these stocks as “bullet proof” buys. They’ve withstood every dip and crash over the last 20 years. For our five ultra-tough stocks, click here.