Schumer Hops Aboard the Cannabis Train

Not too long ago, it would have been sheer fantasy to suggest that the U.S. Senate’s majority leader and the chairman of the powerful Senate Finance Committee would sponsor sweeping legislation to decriminalize marijuana. A marijuana smoker’s fever dream, perhaps.

But Wednesday, the dream became reality.

The Cannabis Administration and Opportunity Act (CAOA) would prevent Americans from getting arrested or barred from receiving essential services for using cannabis where it is legal. This proposal also would give state-compliant cannabis businesses unimpeded access to financial services.

The legislative proposal would remove marijuana from the list of controlled substances and begin regulating and taxing it. The bill would expunge federal non-violent marijuana crimes and allow individuals currently serving time in federal prison for non-violent marijuana crimes to petition a court for resentencing. It also would establish a fund to reinvest in communities that were harmed by the so-called War on Drugs (see tweet, posted July 14). 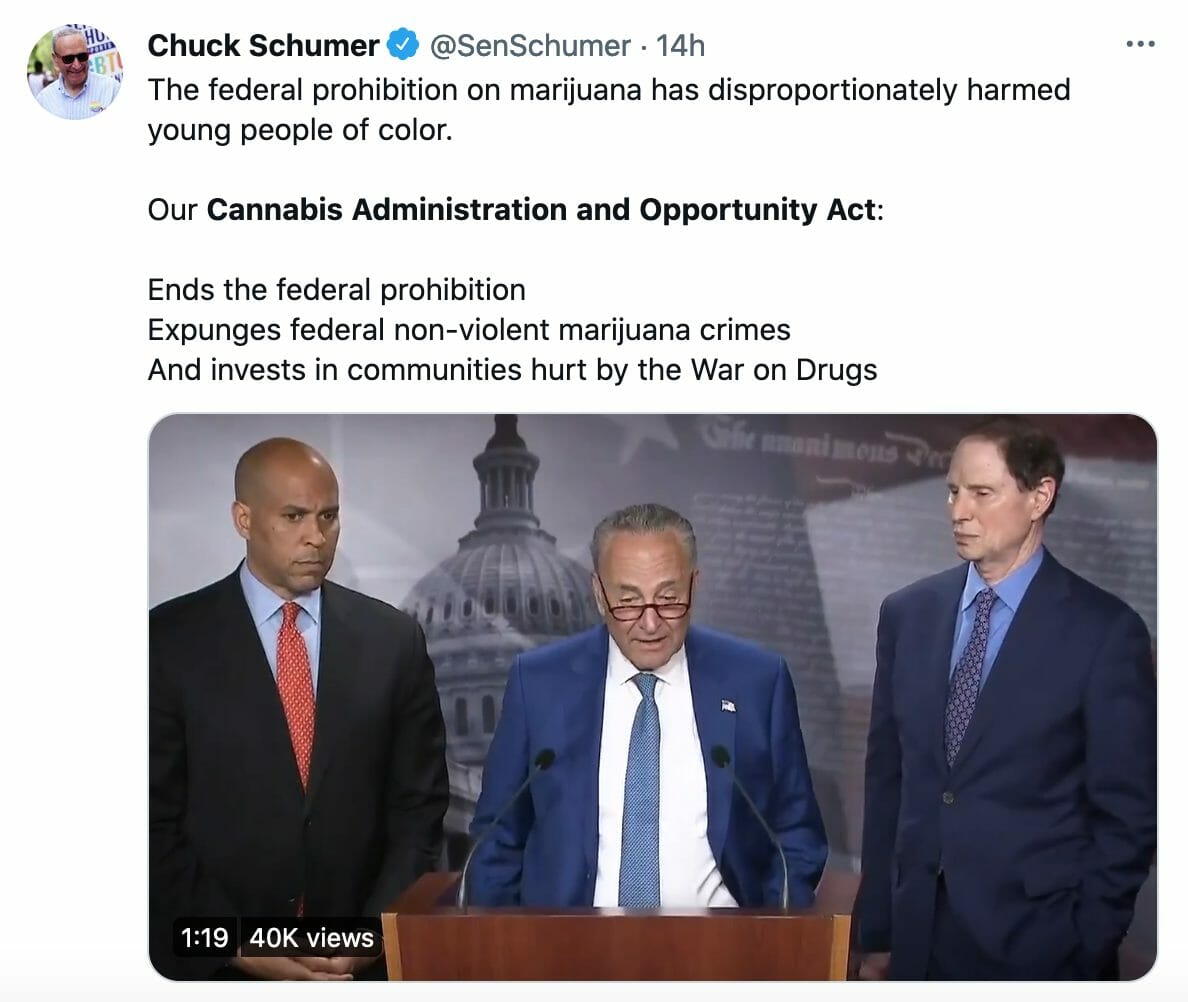 To protect public health and remove the legal stigma against weed, CAOA would transfer regulatory responsibility from the U.S. Drug Enforcement Agency (DEA) to the Alcohol and Tobacco Tax and Trade Bureau (TTB), the Bureau of Alcohol Tobacco Firearms and Explosives (ATF), and the Food and Drug Administration (FDA).

At a press conference to announce the draft proposal, Schumer said:

“It’s not just an idea whose time has come; it’s long overdue. We have all seen the agony of a young person arrested with a small amount of marijuana in his or her pocket. And because of the historical over-criminalization of marijuana, they have a very severe criminal record they have to live with their whole lives.”

Schumer promised to “use my clout as majority leader to make this a priority in the Senate.”

Many cannabis stocks jumped on the news, continuing their months-long rally. Marijuana investors have regained their confidence this year, as the operating results of canna-businesses generally exceed expectations, and the legalization train gathers speed.

The marijuana industry benchmark exchange-traded fund Amplify Seymour Cannabis ETF (CNBS) has thumped the SPDR S&P 500 ETF Trust (SPY) year to date, 36.73% versus 16.46% respectively (as of market close July 14). Marijuana stocks are on track to continue their ascendancy in the second half of 2021.

Lifting federal bans that keep state-legal cannabis producers out of the U.S. banking system would reduce violent crime against those producers. Under the legal status quo, marijuana distributors and sellers are compelled to conduct most of their business in cash, making them targets for theft and violent robberies.

Separate legislation that’s similar (albeit less sweeping) is the Secure and Fair Enforcement (SAFE) Banking Act, which was approved along largely bipartisan lines in the House and currently sits before the Senate. Banking lobbyists are firmly behind CAOA and SAFE.

As with CAOA, the SAFE bill would help solve the marijuana industry’s cash woes, by allowing canna-businesses freer access to financial services. Both bills would undercut the growing black market in marijuana sales.

Both bills face an uphill fight with Senate Republicans, many of whom still relish the tough rhetoric that’s left over from the War on Drugs. However, the Democrats have the political wind at their backs.

A recent Gallup poll reveals that nearly 70% of Americans support legalizing marijuana. Thirty-seven states and the District of Columbia have legalized marijuana for medical use, and 18 states plus DC allow recreational use by adults.

How much has American society changed? In 1969, when Gallup first measured the public’s views of marijuana legalization, only 12% of Americans backed it. Richard Nixon, the man who launched the War on Drugs, was in the White House back then.

If Nixon were alive today, he’d probably be astonished by Wednesday’s development in the Senate. Investment opportunities in marijuana are indeed astonishing. You need to act now, before pot stock prices reach unaffordable levels. For our team’s latest research on the best pot stocks, click here.