In Hollywood, filmmakers call it the “jump scare.” It’s when some sort of monster (usually one that you mistakenly thought was dead) suddenly leaps into view, startling the audience.

I hate jump scares. So does Wall Street, which just got one thanks to the abrupt reappearance of the COVID monster, which most investors had assumed was vanquished.

Below, I’ll explain how to trade under these fraught conditions, with an unstinting look at both the bad and good news. The emergence of COVID Delta and the stock market’s plunge on Monday should prompt you to be cautious, but don’t run for the exits. When Wall Street panics, it spells opportunity for cool-headed investors.

Monday’s losses were across the board, with all 11 S&P 500 sectors closing lower. Travel and leisure stocks, and other so-called “reopening stocks,” got clobbered the worst. Bond yields fell as investors fled to safe havens. The CBOE Volatility Index (VIX), aka “fear index,” spiked more than 33%.

However, in pre-market futures trading Tuesday, U.S. stocks were roaring back and firmly in the green. Fact is, there’s still plenty of good news to go around to shore up the markets. Despite the recent jump scare on Wall Street, I still think we face an economic boom this year and beyond. Monday’s dip in cyclical re-opening stocks represents a buying opportunity in those industries.

COVID rates are increasing again, with the Delta variant posing a particularly deadly and contagious threat. As of July 19, there have been more than 609,000 deaths related to COVID in the United States.

Vaccination rates are lagging in certain regions of the world, especially in U.S. “red states” where anti-vaxx sentiments run high. Nearly 20% of the nation’s new COVID infections are now happening in Florida alone.

In a statement Sunday that rattled the nation and paved the way for Monday’s stock market plunge, Scott Gottlieb, the former commissioner of the U.S. Food and Drug Administration, predicted that “most” unvaccinated Americans will get infected with the COVID Delta variant.

Other public health officials made similar statements over the weekend. Surgeon General Vivek Murthy said Sunday that he expects more state and local governments around the nation to reimplement COVID-19 prevention measures, including mask mandates.

The sum effect was akin to yelling “Boo!” at investors. The biggest worry for investors right now is biological, not financial. Take a look: 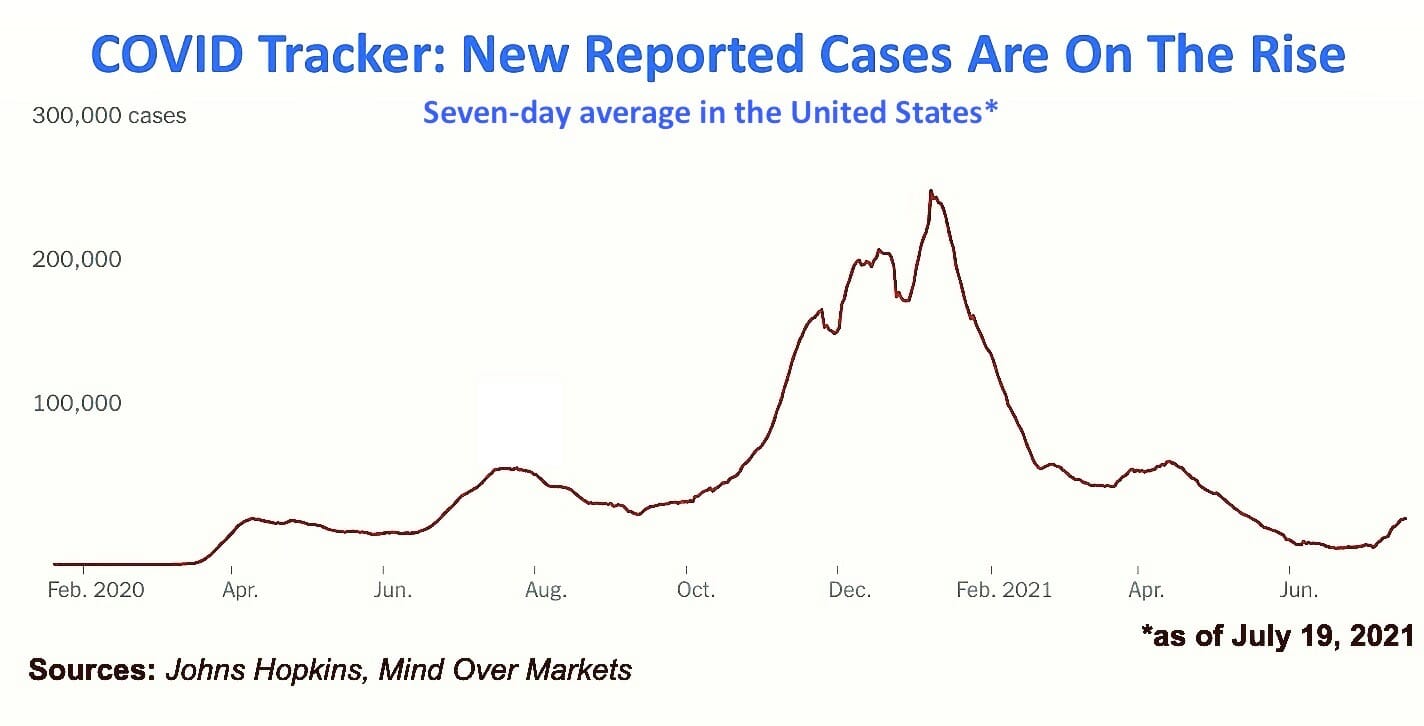 The price of West Texas Intermediate (WTI), the benchmark U.S. crude, fell more than 7% on Monday. However, on Tuesday, the price of WTI was bouncing back. Energy traders are cheered by the latest agreement of major oil-producing nations to loosen production limits

The return of energy equilibrium…

Good news came on Sunday from the Organization of Petroleum Exporting Countries and its partner Russia, the cartel known as OPEC+.

OPEC+ put aside its differences over the weekend to reach a deal to boost crude oil production. As the economic recovery accelerates and energy demand burgeons, now’s the time to add reasonably priced energy equities to your portfolio.

But the OPEC+ deal is important for investors of all types. Gasoline prices and inflation are now likely to ease as more oil comes to market.

Sunday’s decision to throw open the spigots calls for OPEC+ to begin pumping more oil beginning in August. The agreement, coming after several aborted attempts at compromise in earlier meetings, settles a dispute between the cartel’s de facto leader, Saudi Arabia, and the United Arab Emirates (UAE). The latter wanted a higher baseline for its production quota.

Saudi Arabia is the world’s biggest crude oil exporter and as such, a bellwether of the global oil market. The UAE has expressed impatience at working in the shadow of the Saudis and seeks greater autonomy. The UAE also wants higher oil revenue to pursue ambitious development plans, including a pivot to renewable energy products and services. The Saudis managed to corral the UAE to accept a middle ground.

In recent days, the impasse over new production mandates helped cause a surge in oil prices, which hit six-year highs earlier this month.

U.S. gasoline prices have been on an upward trajectory, causing political headaches for the Biden administrating and stoking inflation. The average price of a gallon of regular gasoline in the U.S. hovers at $3.17 per gallon, according to AAA (as of July 20). A year ago, during the nadir of pandemic-induced lockdowns, gasoline cost on average only $2.18/gallon.

OPEC+ accounts for about 40% of the world’s crude oil. Under the production agreement announced Sunday, OPEC+ will increase output each month by 400,000 barrels a day, beginning next month. By the end of 2021, this increased output will have added 2% to the world’s oil supply.

Despite significant inroads made by renewable energy technologies, crude oil remains the most important commodity in the world. Equilibrium in the energy markets goes a long way to soothing Wall Street’s nerves.

Greater oil production indicates that economic growth is expected to pick up steam and boost demand for energy. It also indicates that supplies will loosen up and bring down oil prices, which will in turn dampen inflation and forestall Federal Reserve tightening.

Another positive for the stock market is robust corporate earnings growth. On July 19, research firm FactSet reported that the latest blended earnings growth rate for the S&P 500 for Q2 2021 is 69.3%.

The upshot: The outbreak of COVID Delta should prompt caution, not panic, among investors. Public health officials are increasingly on the ball and biotech companies have proven remarkably resourceful in creating vaccines. The World Health Organization stated Monday that the pandemic could be under control by next year. In the meantime, stay invested but brace for volatility.

If you’re looking for ways to beat the market with less risk, consider an asset class that’s a time-proven hedge against uncertainty: dividend-paying stocks.

During market downturns, high-yield stocks offer solid protection. Our investment team has screened the universe of dividend stocks to find the cream of the crop. For our special report on the best high-yielders, click here.