Johnson & Johnson: Is a Breakup in the Works?

On July 21, JNJ released its fiscal 2021 Q2 results. The news was mostly good, led by a 27.1% increase in sales compared to the same period last year. The company raised its guidance for the remainder of this year on the strength of $2.5 billion in expected sales for its COVID-19 vaccine.

That same day, the attorneys general for seven states reached a $26 billion settlement with JNJ and three other companies for their roles in opioid sales. As its part of the deal, JNJ will pay $5 billion over the next nine years.

You might think that news like that would send shares of JNJ tumbling. COVID-19 vaccine sales won’t go on much longer, but the cost of the legal settlement will be around until the end of this decade.

In this case, you would be wrong. Apparently, the stock market likes certainty even if it comes with a high price tag. JNJ rose slightly that day and has gained more than 16% over the past 12 months. 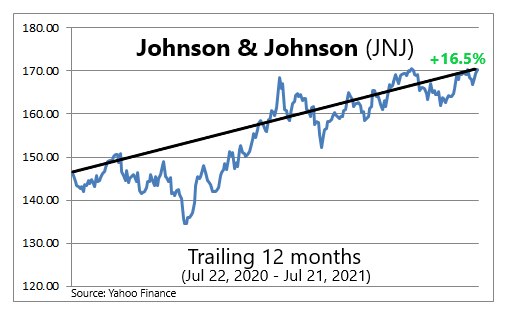 That sounds pretty good until you realize that the SPDR S&P 500 ETF Trust (SPY) is up more than twice that with a total return of 35% over the same span. In truth, JNJ has been lagging the overall stock market for a long time. It has taken eight years for it to double. Over the same amount of time, SPY has tripled in value.

I used to hold JNJ in the Personal Finance Growth Portfolio. But I unloaded it two years ago while the company was mired in several class-action lawsuits unrelated to the opioid crisis.

Now, I’m wondering if it is time to consider adding JNJ to our Income Portfolio. Its most recent quarterly cash dividend of $1.06 equates to a forward annual dividend yield of 2.4%.

With the biggest threat of the opioid crisis behind it, JNJ can focus on increasing revenues instead of decreasing liabilities. I also think it may do what Merck (NYSE: MRK) just did to spur sales.

On June 3, Merck announced that it had completed the divestiture of Organon (NYSE: OGN). Organon holds the intellectual property rights to popular Merck drugs that will soon lose their patent protection.

The plan is for Organon to develop generic versions of its own drugs so it can retain those sales rather than lose those revenue streams altogether. Commoditization is never good for a business. Profit margins get squeezed down to almost nothing.

Merck will retain a minority interest in Organon. More importantly, it can deploy its capital more effectively by focusing on high-margin products. Merck was getting too big and a divestiture was the quickest route to becoming a smaller and more profitable enterprise.

I suspect Johnson & Johnson may be considering doing something similar. It has become a behemoth with a market cap of $450 billion.

That makes JNJ worth more than Pfizer (NYSE: PFE) and AbbVie (NYSE: ABBV) combined. Imagine trying to merge those two companies and increase the return on equity (ROE) at the same time.

It’s much easier to do the reverse. Identify a target ROE and then divest all of the business units that can’t meet that threshold.

Too Much of a Good Thing

The one thing Johnson & Johnson does extremely well is generate cash flow. The company has an operating margin of 25% and a profit margin of 20%.

However, the stock market no longer rewards cash flow for its own sake. It’s what you do with all that money that counts.

Using that excess cash flow to buy more businesses only exacerbates the current problem. At some point, JNJ runs the risk of being viewed (and valued) more like a public utility than as an innovative growth company.

Buying back shares with that money would at least improve the company’s operating metrics on a per-share basis. That will appeal to the trading algorithms but won’t excite portfolio managers looking for real growth.

That leaves JNJ with the choice of increasing its already generous dividend or breaking up the company. I don’t see the point in raising the dividend. If a solid dividend yield doesn’t appeal to income investors in this interest rate environment then nothing will.

But I do see the point in breaking the company up into more specialized pieces. And now that the major opioid lawsuit has been settled, I wouldn’t be surprised to see that happen soon.

Editor’s Note: There’s seemingly no end to Wall Street’s shenanigans. Well, you can keep it simple with these five safe, high-yield stocks…and you may never have to worry about headline risk again.

These “bulletproof buys” have weathered every dip and crash over the last 20 years and still hand out massive gains. One of these companies hasn’t missed a single dividend since Nixon was in office…and it’s STILL a buy! Click here for details.