To me, nothing beats a cold beer on a hot day. Fortunately, the proliferation of craft beers has made that experience even more enjoyable.

Much of the credit goes to The Boston Beer Company (NYSE: SAM). The business was founded in Boston in 1984 by Jim Koch. Its flagship beer, Sam Adams, led the American revolution in craft brewing.

Back in my college days, the dominant brands were Budweiser, Schlitz, and Pabst Blue Ribbon. At the time, we thought that was as good as it gets.

We were wrong. Now, there are hundreds of craft brewers that offer a wide variety of malted beverages. In addition to traditional ales and lagers, many brewers also sell hard ciders and seltzers.

The rapidly rising popularity of craft beer has amply rewarded longtime Boston Beer shareholders. Since its initial public offering in 1995 at $15, SAM crested above $1,300 three months ago on the strength of its first quarter results. 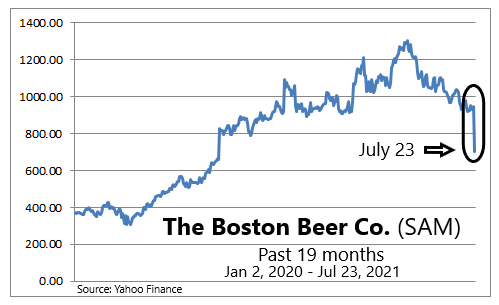 It had been in a gradual decline since then. But after releasing its Q2 results last Friday, SAM plunged 26% to close at $701. That works out to a drop of 46% in less than 100 days.

During the first three months of this year, Boston Beer’s net revenue increased 65% versus last year. Keep in mind, the coronavirus pandemic did not start shutting down the economy until mid-March of 2020 so the comparison is mostly accurate.

At the same time, the company provided full year guidance for diluted earnings per share (EPS) of $22 to $26. On a forward price-to-earnings ratio (FPER) basis, SAM was valued more like a hot tech stock than a beer maker.

The problem was not overall sales. During the second quarter, Boston Beer increased net revenue by 33% over last year.

However, the company suffered a slight decrease in net income and diluted EPS. One reason was increased spending on advertising and sales, which jumped 61.1% during the quarter.

Even worse, Boston Beer revised its guidance for diluted EPS this year down to $18 to $22. For a stock trading at a high FPER, a downward revision to forward earnings is especially damaging.

Americans are not consuming less beer. In April, total domestic beer production was 13.1% higher than a year prior. Almost all of that increase was due to sales of keg beer, used primarily by bars and restaurants that were closed the previous year.

In short, sales of bottled and canned beer are flat and bar sales are back to normal. Boston Beer was betting on its hard seltzer brand, Truly, to have a breakout quarter.

That didn’t happen. In fact, just the opposite occurred. Jim Koch did not mince words in describing the impact that had on the company’s performance:

“We overestimated the growth of the hard seltzer category in the second quarter and the demand for Truly, which negatively impacted our volume and earnings for the quarter and our estimates for the remainder of the year.”

According to both companies, demand for hard seltzer has cooled off much quicker than anticipated. Now, they are stuck with a lot of unsold inventory that nobody wants to buy. My guess is there will be a sale on hard seltzer coming to a liquor store near you very soon.

Most of the projections made for sales of hard seltzer this year were based on the popularity of White Claw last year. White Claw is a hard seltzer with fruity flavors that is especially popular during the hot summer months.

But now that restaurants and bars are back open, consumer tastes are reverting to more traditional indoor alcoholic beverages. Mixed drinks are in and hard seltzers are out.

Even after last week’s big price drop, SAM is valued at roughly 30 times forward earnings. That’s more than double the same multiple for Molson Coors and a third higher than the 22 multiple for Anheuser-Busch InBev (NYSE: BUD).

That does necessarily mean the stock price has a lot further to fall. With a short interest ratio of 14%, SAM should appeal to the meme stock traders that have driven up GameStop (NYSE: GME) and AMC Entertainment (NYSE: AMC) to unimaginable heights.

If that happens, SAM could quickly soar back above $1,000. In fact, it could go a lot higher than that. Three months ago, AMC shot up 600% in just eight weeks. AMC has a short interest ratio of 15%, about the same as SAM.

That said, I don’t recommend making money in the stock market by trying to anticipate the whims of meme stock traders. If your timing is just a little bit off, you could be the one left holding the bag.

For that reason, I suggest instead that you consider a more reliable system for profiting from the stock market’s sometimes irrational behavior. I’m referring to high-quality dividend stocks.

Dividend-payers are time-proven vehicles for long-term wealth building, but they’re also safe havens because companies with robust dividends boast the strongest fundamentals. For our list of the best high-yielders, click here.