Earnings Season: Keep Your Eye on the Puck!

I’m a native of New England, so it’s not surprising that growing up, I played a lot of ice hockey. I was lousy at it, but I loved to play, and I’ve always remembered some excellent advice from one of my hockey coaches: “Don’t skate to where the puck is, skate to where you think it will be.”

His adage applies to corporate earnings season and the expectations game, which accounts for the market’s volatility this week. Let’s take a look at how good can be interpreted as bad, and vice versa. Like a hockey player, the key is to stay forward looking.

The torrid stock market rally set a high bar for earnings season and the economy. The latest numbers for U.S. gross domestic product (GDP) growth and initial jobless claims came in well below expectations, but stocks rose anyway. Why? Because Wall Street is expecting faster growth later this year.

Two separate economic reports this week came in below expectations. The Bureau of Economic Analysis (BEA) reported Thursday that U.S. second-quarter GDP grew 6.5% on an annualized basis, far less than the consensus forecast of 8.4% (see chart). 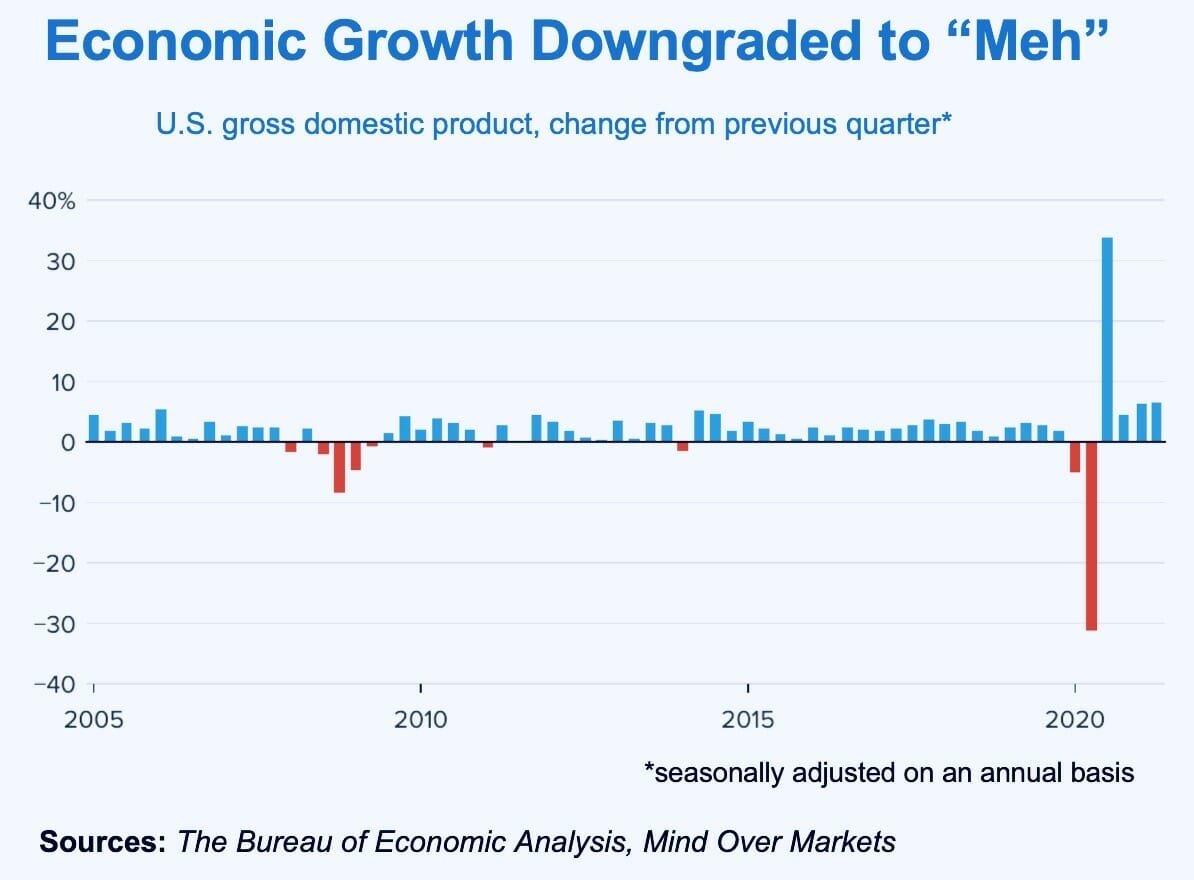 However, investors shrugged off the GDP miss because the number was largely caused by dropping inventories, which means they’ll soon need to be restocked.

Personal expenditures, on the other hand, came in at a robust growth rate in Q2 of 11.8%, due to a dramatic increase in spending on services.

What’s more, with this latest report, the U.S. economy has now recouped the losses of the last 18 months and surpassed the pre-pandemic GDP peak.

The following chart breaks down Q2 2021 U.S. GDP into its four components and depicts the degree to which each component contributed to the total growth of 6.5%: 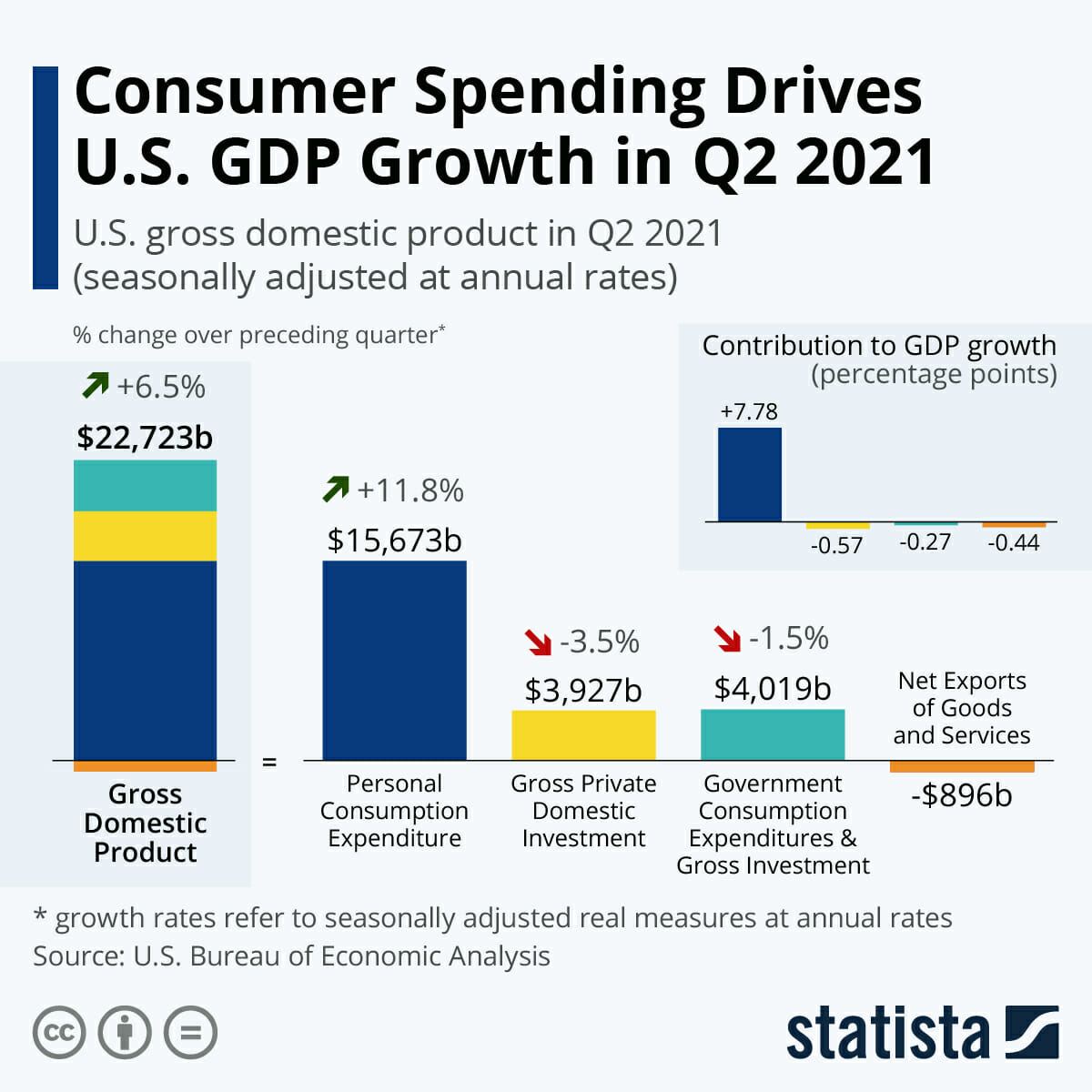 Also on Thursday, the Labor Department reported that initial jobless claims underperformed, hitting 400,000 for the week ended July 24, higher than expectations for 380,000.

Despite these fluctuations, though, the trend is clear: the economy is on the mend. The somewhat soft numbers also had the effect of diminishing fears about inflation.

Investors also are encouraged by a strong Q2 earnings season, but with caveats.

Watch This Video: For Q2 Earnings, The Beat Goes On

Amazon beat on earnings but missed on revenue and provided tepid third-quarter guidance. The news got a thumbs down from Wall Street.

Amazon’s revenue grew by 27% year over year to $113.08 billion, the third consecutive quarter in which the e-commerce giant surpassed $100 billion in revenue. However, that’s a dramatic slowdown from Q2 2020, when revenue soared 41% year over year. The company blamed problematic year-over-year comparisons due to COVID. Amazon’s stock fell in after-hours trading.

A bit of unalloyed good news is rising consumer confidence. In its latest monthly survey released July 27, The Conference Board reported that its Consumer Confidence Index increased to 129.1, its highest level since hitting 132.6 in February 2020. The widely followed index reflects prevailing business conditions, as well as consumer attitudes and expectations.

Also cheering investors is the prospect of additional fiscal stimulus, in the form of infrastructure spending. In a surprisingly bipartisan vote of 67 to 32, the U.S. Senate on Wednesday voted to advance President Biden’s $1.2 trillion infrastructure bill, which is a key part of his administration’s agenda.

Even Senator Mitch McConnell (R-KY), who has expressed his intention to render Biden a one-term president, voted to clear the bill. Often referred to as “Dr. No” for his obstructionist stance towards any Democratic proposal, McConnell stunned the political cognoscenti by relenting.

One reason for the rare bipartisanship is heavy lobbying for the bill by the construction industry. A lot of money and jobs are at stake. Investors are salivating at the prospect of additional fiscal stimulus.

In its current form, the deal is expected to cost $1.2 trillion over eight years, and offers more than $550 billion in new spending, including $110 billion in new funds for roads, bridges, and major projects.

Senate Majority Leader Chuck Schumer (D-NY) has vowed to keep the Senate in session over the weekend, to help grease the skids for the bill’s passage. As lawmakers fight hammer and tongs this week over the January 6 Capitol Riot investigation, it’s remarkable that legislation of this magnitude can garner support from both sides of the aisle.

Amid the jostle of good and bad news, just keep your eye on the puck.

A rare metal with rare mettle…

The deteriorating infrastructure currently getting addressed by Congress is a global problem, which makes infrastructure spending an investment trend with multi-year momentum. That’s a tailwind for commodities.

As the world economy displays a voracious appetite for raw materials, a certain “miracle metal” has emerged as an outstanding commodity play,

It doesn’t get a lot of news coverage, but this specialty metal offers several crucial benefits, including lighter weight and higher thermal conductivity than aluminum; greater strength than steel; and high heat tolerance.

This metal is leveraging technologies of the 2020s, particularly green energy and electric vehicles. Those are the industries that are set to thrive under the Biden administration.

The aerospace industry is particularly dependent on this metal. Without it, Branson, Bezos and Musk would have to give up their dreams of space travel.

The metal is in short supply and demand is increasing, which means its price is about to skyrocket. To learn more about this ultra-versatile metal and how to profit from it, click here now.