The Next Big Stock Market Winner from Bill Gates

Bill Gates has more than his fair share of detractors. The software giant he founded in 1975, Microsoft (NSDQ: MSFT), was a frequent target of federal regulators in its early days

Gates’ gadflies felt that Microsoft effectively was a monopoly and was taking advantage of its customers, including the government. Try as he might, Gates could not convince regulators that his company was actually spurring innovation instead of squashing it.

That was a long time ago. Gates is now known more for the charitable work of his private foundation than he is for his business credentials (putting unfounded conspiracy theories about him aside).

Gates had been predicting for years that a pandemic was coming and the only way to fight it was with a vaccine. He put his money where his mouth is. In 2015, his foundation gave $89 million to biotech lab Novavax (NSDQ: NVAX) to develop a vaccine for a respiratory virus.

Last year, NVAX shareholders hit the jackpot. After opening 2020 beneath $5, NVAX was trading above $130 by December. And that was only the half of it (literally). 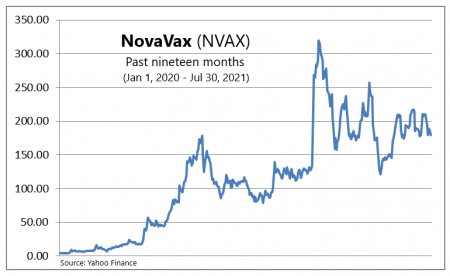 Six months ago, NVAX crossed above $300 when demand for COVID-19 vaccines was at a fever pitch. Thanks to the foresight and generosity of Bill Gates, a lot of NVAX shareholders have suddenly become much wealthier.

But those aren’t the only investors that have profited from his advice. Gates has made a number of prescient stock market calls that proves he is still very much on top of his game.

Last year, Gates opined that electric battery technology was nowhere close to being able to power the type of trucks being hyped by Nikola (NSDQ: NKLA). That comment was made shortly after NKLA became a publicly traded company via a special purpose acquisition company (SPAC) offering.

Turns out, Gates was right. There really isn’t a mobile battery that can power a vehicle of that size. The company admitted that it staged a marketing video to create the appearance of a truck powered on its own.

You know how this story ends. Thirteen months ago, NKLA peaked above $70. At the start of this week, it was trading below $12. That’s a decline of 83% in less than 14 months. 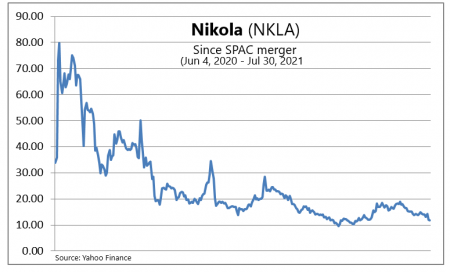 Once again, Gates’ business acumen was spot on. However, he got very little credit afterward for once again being proven correct.

The problem for Gates is that he plays the long game. He is gazing many years into the future in a world that has become accustomed to instant gratification.

His complex answers to simple questions don’t play well on social media. As Gates dutifully recites the mental decision tree he has constructed to determine the feasible set of potential outcomes and then identify the ultimate winners and losers from battery technology, investors swipe left and move on to the next cat video.

That’s a shame. Because if they actually listened to what he is saying, they might make themselves a small fortune.

And right now, Gates is betting on another type of battery technology that he believes will be one of the long-term winners.

That company is QuantumScape (NYSE: QS). It describes itself as “a leader in the development of next-generation solid-state lithium-metal batteries for use in electric vehicles.”

Since the company’s founding in 2010, it has received significant financial backing from Bill Gates and Volkswagen. A year ago, QuantumScape when public via a SPAC transaction priced near $10 a share.

The stock soon took off, cresting above $130 before the end of the year. Since then, it has come crashing back to earth. By the end of last week, it was trading below $23. 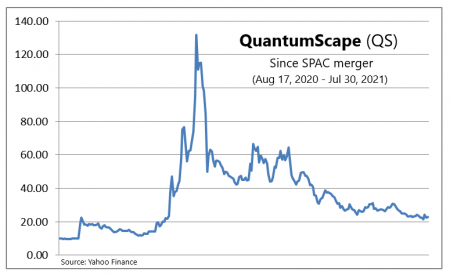 That may be why the company’s CEO, Jagdeep Singh, did an interview with Yahoo Finance Live last week. According to Singh, QuantumScape is on schedule to commercialize its electric battery by 2025. If true, it should be only a matter of time until QS once again starts climbing up the charts.

But that could take a long time. Remember all those happy NVAX shareholders I talked about earlier? Some of them had to wait several years before seeing a big payoff on their investment.

Fortunately, you don’t have to wait nearly as long.

We’ve pinpointed a fast-growing company that has its hands in just about every cookie jar on earth.

This firm is the world’s only producer of a rare, miracle material that’s essential for biological medicine, the Internet of Things, aeronautics, autonomous vehicles, microchips, 5G…you name it. The company is in the vanguard of the 21st century’s technological “re-set.”

The time to invest in this company is now, before the rest of the herd catches on and bids up its share price. Click here for details.