I get emails from readers who lament missing the boat. They kick themselves for not investing in the mega-cap tech leaders when their shares were cheap.

But it’s never too late to become a millionaire. New opportunities for exponential riches are ceaselessly born. You just need to know where to look…and act before the crowd.

Below, I will bring your attention to what is, in my opinion, “The Next Big Thing.” This technology involves one of the most profound wonders of nature: the code of life embedded within human DNA.

Rise of the new “nerds”…

Silicon Valley’s titans transformed the economy, financial markets, and society. They started out as tech geeks of modest means, but now they’re gazillionaires who move markets and bask in social adulation.

The coronavirus pandemic made these information technology pioneers even richer, as people increasingly rely on their innovative products and services to work and play at home.

Well, make way for the new heroes of innovation: the biologists, chemists, and other scientists who are forging new medicines from gene-editing “toolkits.” This is the new frontier of science.

The race for a COVID vaccine, which produced effective treatments with astonishing speed, underscores the life-and-death role of med-tech. New techniques for gene editing are coming to the fore that promise upheavals on a par, or perhaps even greater, than those wrought by social media, e-commerce or personal computing.

As depicted in novels such as Aldous Huxley’s Brave New World, or movies such as Gattaca, humankind now possesses the ability to quickly and cheaply edit genes, not just to fix abnormalities but in ways that permanently alter DNA to allow the edits to be hereditary.

Biotech firms are editing DNA to treat and prevent diseases such as Alzheimer’s, Huntington’s, Parkinson’s, multiple sclerosis, sickle cell anemia, a wide range of cancers…just about any scourge you can think of.

But scientists can also create designer babies, with enhanced physical traits. What’s the development of smartphones, compared with the ability to play God?

The cautionary tale of Frankenstein warns us of the dangers of mortals pursuing God-like powers, and these ethical issues are getting hammered out. Regulations prohibit gene-editing toolkits to be used as “genetic supermarkets” (for now).

But in the meantime, scientists from coast to coast, from MIT in Massachusetts to Stanford in California, are devising new biotech treatments based on ways to slice-and-dice DNA, RNA, and the other building blocks of life.

In 2020, the Nobel Prize in Chemistry went to Jennifer Doudna and Emmanuelle Charpentier, for their advances in genome editing. They created a revolutionary gene editing tool called CRISPR, an acronym for clustered regularly interspaced short palindromic repeats. Let’s put aside the jargon. Here’s what you need to know: CRISPR is the hottest area in biotech research today.

The Nobel-winning work of these two women has triggered a wave of venture capital funding for bioengineering start-ups involved in CRISPR. Indeed, these techniques were applied in 2020 and 2021 in the concerted global effort to find COVID vaccines.

Several gene-editing tools already were in existence, but CRISPR is by far the most cost-effective and precise. CRISPR guides molecular scissors to a targeted section of DNA, to disable or repair a gene, or to insert a new molecule where the scissors have made a cut. Think of CRISPR as a genetic-engineering “cruise missile.”

Exciting new forms of science are flourishing in biotechnology and investors are getting wise to the phenomenon. The benchmark iShares Biotechnology ETF (IBB) year-to-date has gained 16.8%, compared to a gain of 9.5% for the S&P 500 (see chart): 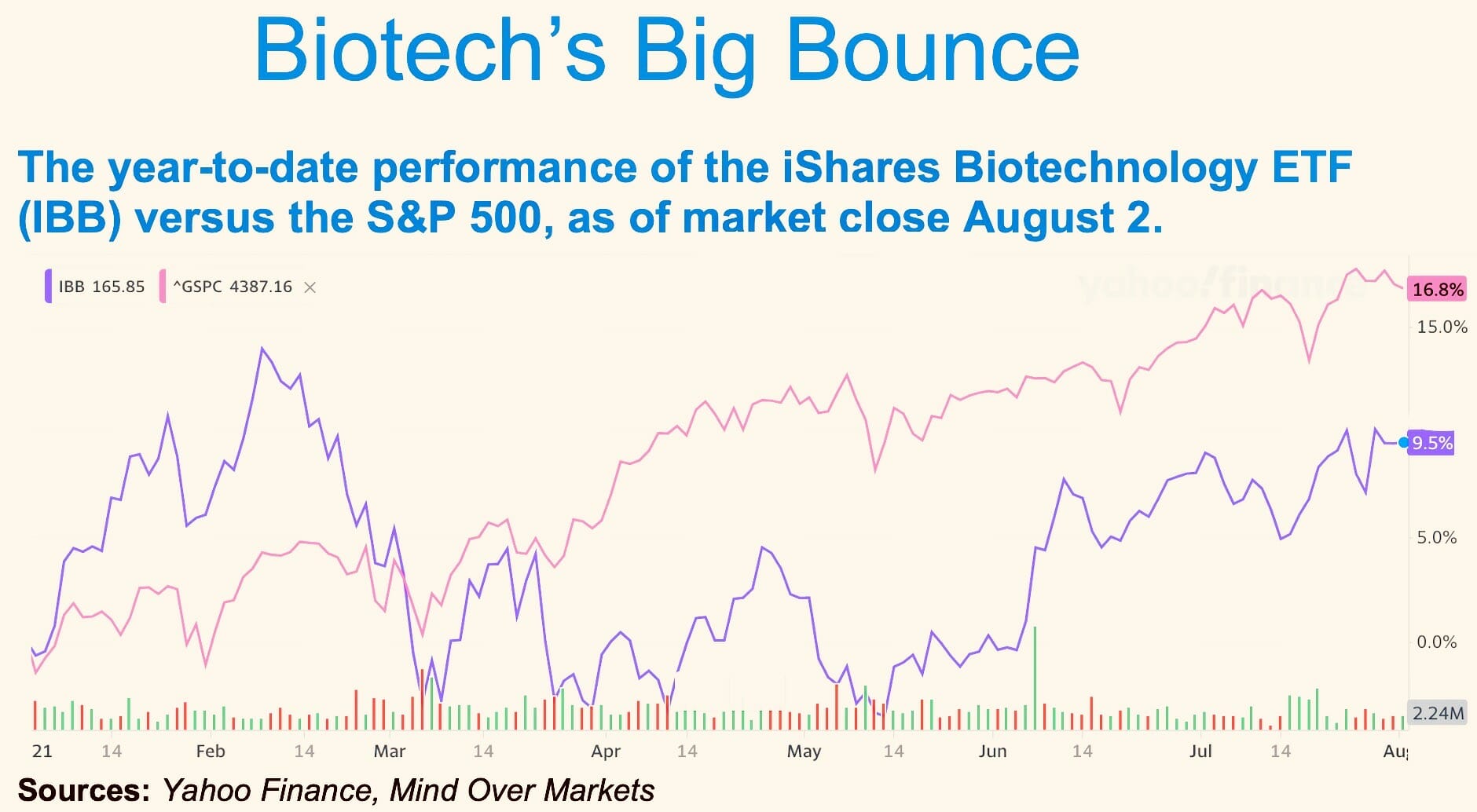 The animal spirits of innovation have helped propel stocks to new highs this year, although stocks tumbled Monday in late trading, as strong corporate earnings were overshadowed by renewed fears that COVID might impair economic growth.

The Institute for Supply Management reported on Monday that its purchasing manager’s index expanded in July, but the pace slowed for the second consecutive month, underscoring worries that the economy had reached peak growth. In pre-market futures contracts Tuesday, all three major U.S. stock indices were trading higher, as attention shifted once again to robust corporate operating results.

Few trends are more powerful than global demand for health services. Populations around the world are aging and middle classes in emerging markets are getting more affluent. Global expenditures on doctors, hospitals and pharmaceuticals are surging. Drug demand, in particular, enjoys enormous tailwinds (see chart). 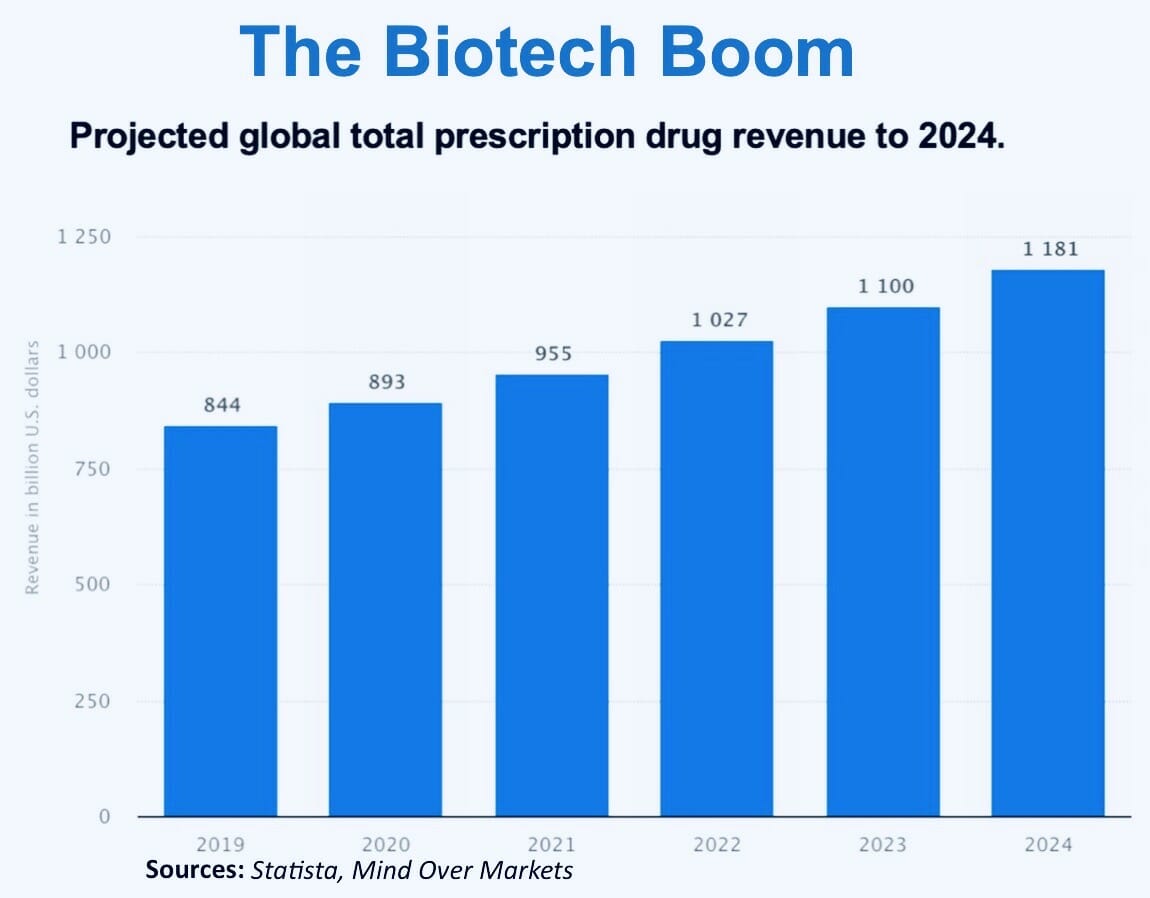 Between 2020 and 2022, global health care spending is expected to rise 5.4% annually to exceed $10 trillion. The U.S. is projected to spend $5.9 trillion on health care in 2027, up from $3.6 trillion last year and the highest amount of any developed country.

Looking to make money from these mega-trends? CRISPR-related companies aren’t making money…yet. The good news is, we’ve pinpointed a profitable, publicly traded company that already has its hands in just about every cookie jar on earth, including biotech.

This firm is the world’s only producer of a rare, miracle material that’s essential for not just biological medicine but also for the Internet of Things, aeronautics, autonomous vehicles, microchips, 5G…you name it. The company is in the vanguard of the 21st century’s technological “re-set.”

The time to invest in this company is now, before the rest of the herd catches on and bids up its share price. Click here for details.