One Giant Leap for Your Portfolio

August 5 marked the 91st birth anniversary of Neil Armstrong, the first man to walk on the moon. Now’s an opportune time to discuss the “New Space Race” and how to profit from it.

As a lifelong space buff, I’m thrilled to see billionaires Jeff Bezos, Richard Branson, and Elon Musk compete as astronauts. I know my viewpoint is unpopular in certain quarters, but you won’t hear me complain about the outer space endeavors of these three entrepreneurs.

Critics view the galactic ambitions of Bezos, Branson and Musk as egotistical and argue the money is better spent on earthbound problems. But during the 1960s, naysayers said that about the moon program, too.

Without ego-driven ambition, human beings would never have left their caves, let alone the stratosphere. Which brings me to today’s stock to watch.

A pioneer in the manufacture of high-performance materials, Hexcel made the composite footpads on the Apollo 11 lunar module, as well as similar components for the Mercury and Gemini space programs. Hexcel continues to dominate the composites market and is positioned to ride the accelerating shift toward these super-tough materials in a wide range of industries.

Stamford, Conn.-based Hexcel (market cap: $4.5 billion) is the largest U.S.-producer of carbon fiber and by far the number one producer of aerospace composite materials.

The history of composites goes back to 3400 BC, when the ancient Mesopotamians used a plywood created with glued wood strips. Today, composites are polymer materials reinforced with carbon fiber, forming a strengthened combination that’s light, flexible and durable.

The next decade will see an explosion in the use of composite materials, in a variety of applications that include cars, trains, planes, satellites, boats, bicycles, housing materials, sporting goods, and wind energy.

According to a report released August 4 by the research firm Fact.MR, global demand for aerospace composites is set to rise by a compound annual growth rate (CAGR) of 9% during the assessment period of 2021 to 2031. The aerospace composites market is projected to reach a valuation of USD 56 billion by year-end 2031.

For a snapshot of global composites demand in all sectors, see the following chart: 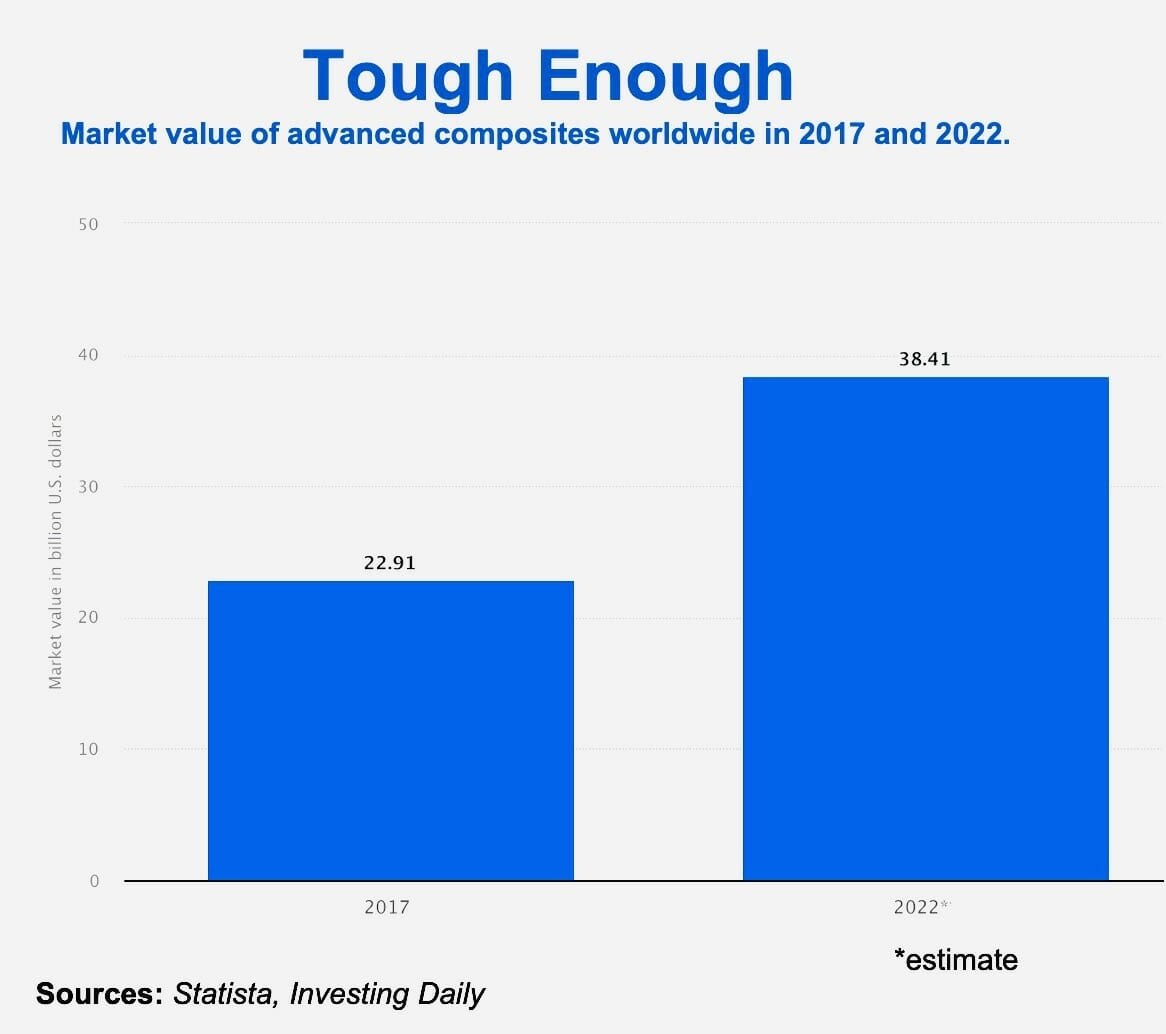 The continual push for greater fuel efficiency is boosting demand for lightweight composites to replace metal parts in automotive manufacture. Meanwhile, development banks are ramping up capital expenditures in composite-dependent wind energy projects across the world.

As demand increases for these sophisticated materials, many manufacturers lack the engineering experience and skills to move away from metal-based assembly lines, forcing them to turn to Hexcel.

Hexcel is a leading supplier of composites for all markets. Two major customers for Hexcel are automotive and wind energy. Within the industrial sector, wind energy comprises over 50% of the company’s annual sales.

However, the company’s greatest opportunities for growth stem from aerospace, where the use of composites is the most significant manufacturing watershed since aluminum replaced wood in the 1920s.

Hexcel is the chief composite supplier for aerospace giant Boeing (NYSE: BA), which has bet the farm on its new Dreamliner 787, a composite-built passenger aircraft. Composites offer dramatic performance benefits for aircraft, including reduced weight, improved fuel burn, and better resistance against corrosion and damage.

That’s why aircraft manufacturing giant Boeing and its competitors have embraced these futuristic materials for commercial aircraft.

Hexcel’s stock has gained about 12% year to date, with even greater stock price appreciation likely ahead. The average analyst expectation is for Hexcel’s year-over-year earnings growth to reach a whopping 688.90% next year. Over the next five years, earnings growth is expected to reach 106.78%, on an annualized basis.

As I’ve just explained, Hexcel is a great way to profitably leverage the New Space Race. But maybe you’re looking for an even more aggressive metals play on these trends.

As the booming world economy displays a voracious appetite for raw materials, a specific “miracle metal” has emerged as a particularly compelling commodity, especially in the aerospace sector.

The metal is in short supply and demand is increasing, which means its price is about to skyrocket. To learn more about this ultra-versatile metal and how to profit from it, click here now.