Before decriminalization came along, marijuana sellers often grabbed greater market share by deploying thugs with guns. Nowadays, they do it by deploying accountants with spreadsheets. I’m not sure which method is more dangerous. I’ll explain why, in a minute.

Leafly, a digital marijuana informational platform, this week unveiled plans to go public through a merger with Merida Merger Corp. (NSDQ: MCMJ), which is a special purpose acquisition company (SPAC).

Leafly is a website focused on cannabis use and education. Based in Seattle, Leafly allows users to find, buy, and review marijuana products. Leafly has evolved into a digital “clubhouse” for marijuana enthusiasts. The Leafly site boasts 120 million annual visitors and 10 million monthly active users. That’s a big and potentially lucrative audience.

Leafly provides a broad variety of data on cannabis, including 1.5 million consumer product reviews, 9,000 cannabis articles and resources, and 5,000 verified strains in its database. The company monitors 8,000 cannabis brands. (These numbers are approximate.)

Merida will adopt the Leafly name; the common stock will list on the NASDAQ under the ticker symbol LFLY. Analysts peg the value of the deal at $385 million.

We’re witnessing a flurry of deal-making in the marijuana industry and most of this consolidation is healthy. However, allow me to offer a few words of caution about SPACs.

Massive fiscal and monetary stimulus has spawned a flood of liquidity. Investors are desperate to put that cash to work. Hence the proliferation of SPACs, especially in the marijuana sector.

Often referred to as a “blank check” company, a SPAC has no commercial operations. It’s essentially a shell company created strictly to raise capital through an initial public offering (IPO) for the purpose of acquiring an existing company. Subsequently, an operating company can merge with or be acquired by the publicly traded SPAC and become a listed company without going through the regulatory rigors of its own IPO.

Private companies resort to SPACs because they view the traditional IPO process as too lengthy and burdensome. SPACs streamline the process.

However, SPACs offer scant transparency and tend to give the sweetest deals to institutional investors and insiders who get aboard early. Investors don’t know for certain what they’re investing in. Sometimes, early investors cash out and leave the other investors holding the bag.

The sponsors of SPACs typically are wealthy private equity investors. Fueling the SPAC market has been Fear Of Missing Out (FOMO), a reliable contrarian indicator that stocks could be poised for a fall. The dynamic is based more on greed than fundamentals. FOMO may soon give way to something else: just plain fear.

But for now, SPACs are red hot. Last year saw an unprecedented number of IPOs of SPACs and the pace has accelerated so far in 2021 (see chart, with data as of July 31). 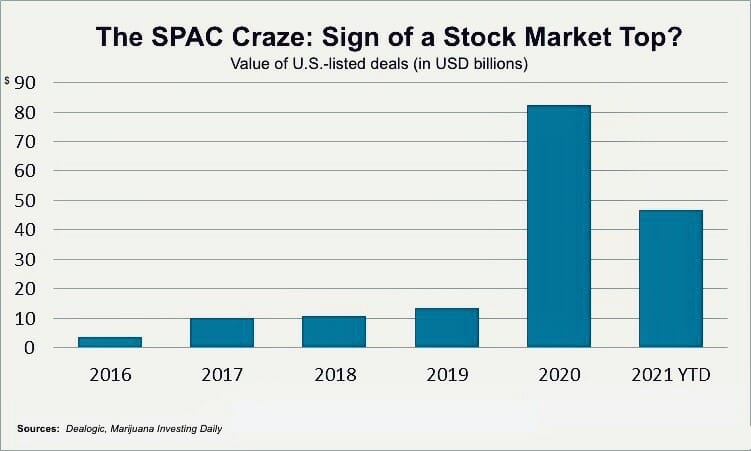 I’m not surprised that the SPAC fad has come to the marijuana industry. Ganja-preneurs are looking for places to leverage their ample piles of cash. Marijuana corporate takeovers generally spell opportunity for investors, if they conduct due diligence and pinpoint the right deals. I’m leery of SPACs, though.

SPACs are making some investors very rich indeed, especially in the technology sector. Previously rare, SPACs have moved from the fringes of the market into the mainstream.

But there are caveats. Notably, the Securities and Exchange Commission warned in a recent investor alert:

“SPAC sponsors generally purchase equity in the SPAC at more favorable terms than investors in the IPO or subsequent investors on the open market. As a result, investors should be aware that although most of the SPAC’s capital has been provided by IPO investors, the sponsors and potentially other initial investors will benefit more than investors from the SPAC’s completion of an initial business combination and may have an incentive to complete a transaction on terms that may be less favorable to you.”

SPACs have led to an outbreak of litigation, as investors who claim to have been burned launch lawsuits. When Wall Street’s lawyers start to get busy, it’s usually a foreboding sign for all of us.

Indeed, on August 9, the law office of Brodsky & Smith announced that it is investigating claims against the Board of Directors of Merida Merger Corp. for possible breaches of state and federal laws in connection with its merger agreement with Leafly. The investigation concerns whether the Merida Board breached its fiduciary duties to shareholders by failing to conduct a fair process, including the dilution of ownership interest in the combined company.

When it comes to marijuana deals, buyer beware.

Our seasoned analysts have pinpointed cannabis plays that could get swept up in the next wave of mega-deals, but through the application of rigorous screens, we’ve sorted the gems from the dross. If you’re looking for a profitable cannabis deal that won’t go sour on you, click here for details.