A Wretched Week for WW International

Last week, I explained why The Clorox Company (NYSE: CLX) wiped out on August 3 after releasing its latest quarterly results. Its share price fell 9.5% that day and has not recovered since.

As I said then, “With the stock market at an all-time high, the penalty for underperforming is severe.” I went on to note that “there is a lot of pressure on companies to exceed the already high expectations of Wall Street.”

You don’t have to tell that to shareholders of WW International (NSDQ: WW). The company formerly known as Weight Watchers lost nearly a quarter of its value last Wednesday after releasing its fiscal 2021 Q2 results the prior evening. 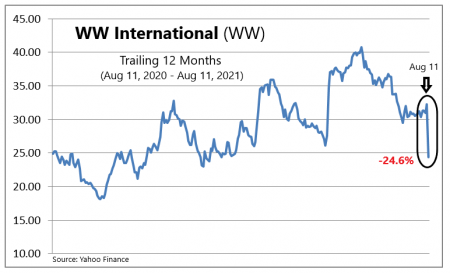 In this case, WW not only failed to live up to the high expectations it had for itself. It lost nearly 100,000 paid subscribers along the way.

To its credit, WW’s management team did not attempt to spin that outcome into good news. The company’s CEO, Mindy Grossman, characterized the performance as “below our expectations.”

That news triggered a panic attack on Wall Street. If WW cannot retain the subscriber base that it built up during the coronavirus pandemic then it won’t be able to grow revenue at the pace projected by the analysts that follow the company.

That’s a problem because the primary justification for sky-high stock prices is potential future income. It’s okay for a stock to be trading at a high multiple to current earnings if that multiple is reasonable for earnings a few years down the road.

To make that math work, analysts plug in aggressive growth forecasts by extrapolating recent trends. In this case, the trend came to an end far earlier than anyone expected.

That begs the question: Is WW a bargain now that its share price is below where it was a year ago or is it a value trap that will steadily slide lower as its subscriber base gradually diminishes?

A fundamental argument can be made that WW is oversold. At a share price of $24, WW is valued at 18 times forward earnings with a PEG (price/earnings-to-growth) ratio of 0.75.

Both of those metrics suggest that WW is about 25% undervalued. Of course, both of them rely on an estimate for future earnings that at this point is at best an educated guess.

To be fair, the company’s second quarter was not a complete disaster. WW ended the period with its highest ever number of digital subscribers, up 6% over last year.

And as the company noted, its Q2 performance is being compared to an unusually strong quarter last year. At that time, severe social distancing restrictions closed gyms and forced many people to work from home.

The combination of a sedentary lifestyle and increased food and alcohol consumption fueled an obesity epidemic. A medical study determined that the average adult gained 1.5 pounds per month during the lockdown.

Hence, the spike in demand last year for WW’s healthy lifestyle products and services. But now that the gyms are open and employees are starting to go back into their offices, some drop-off in membership was all but inevitable.

According to WW’s CFO, Amy O’Keefe, the company has “a comprehensive plan to optimize financial performance in the second half of the year and deliver growth and value creation over the long-term.” Apparently, a lot of WW shareholders weren’t willing to wait around to see how that plan works out.

After reading through the press release, I considered buying a call option on WW the day it went in the tank. A call option increases in value when the price of the underlying security goes up.

My reasoning was that there was a huge imbalance in bid (buy) and ask (sell) orders for WW. That day, the number of shares traded that day was more than ten times its daily average volume.

When that happens, the premiums on call options tend to go down while premiums on put options go up. A put option increases in value when the price of the underlying security goes down.

That may seem logical, but more often than not a stock will rebound shortly after a huge selloff. One set of growth algorithms are dumping the stock while another set of value algorithms is buying it.

In this case, WW continued its swoon into the following day. However, trading volume was substantially lower than the day before. It looks like the stock is close to bottoming out, but there does not appear to be a strong rebound in the works.

At least, not right away. But if WW’s management team can correct the errors of the previous quarter then we could see a big bounce in November when Q3 results will be released.

If all of these considerations seem too risky for you, consider an asset class that pays off while withstanding market ups and downs.

You can keep your trading strategy simple with these five safe, high-yield stocks… and you may never have to worry about what the market is doing again.

These “Bulletproof Buys” have weathered every dip and crash over the last 20 years and still hand out massive gains. One of these companies hasn’t missed a single dividend since Nixon was in office…and it’s STILL a buy! Click here for details.