The Hidden Dangers of Marijuana Edibles

Marijuana investors should be aware of the wave of “bad trips” experienced by marijuana users, because the phenomenon already is giving ammunition to pot prohibitionists who are predisposed against legalization.

Marijuana edibles are all the rage and they’re easily available, but many consumers aren’t paying attention to dosage levels. Sometimes, the edible eats you.

A brownie that should be cut and eaten over time in quarters is consumed whole in one sitting; instead of popping one cannabis gummy bear, consumers will sometimes pop two or three at a time.

It shouldn’t come as a surprise, then, that across the country, hospital officials are treating growing numbers of adults and children who have been sickened by highly potent marijuana, often in the form of seemingly benign edibles. Law enforcement officials also are reporting a rise in the incidence of stoned drivers.

Marijuana is generally safe, but…

A growing body of scientific research shows that marijuana is safe and confers numerous physical and psychological benefits. The legalization of weed has sparked massive investments by Big Pharma into cannabis-based treatments for ailments that have been chronically unresponsive to conventional treatments.

As opposed to the situation with hard drugs, a fatal overdose from marijuana is extremely unlikely. It’s also worth noting that marijuana causes far fewer emergency room (ER) visits than alcohol or other drugs such as heroin, cocaine, and meth. According to the federal Drug Abuse Warning Network, marijuana users are 75% less likely to face an ER visit than prescription drug abusers.

In a recent survey, the influential medical journal The Lancet found that marijuana is among the safest recreational drugs (see chart). 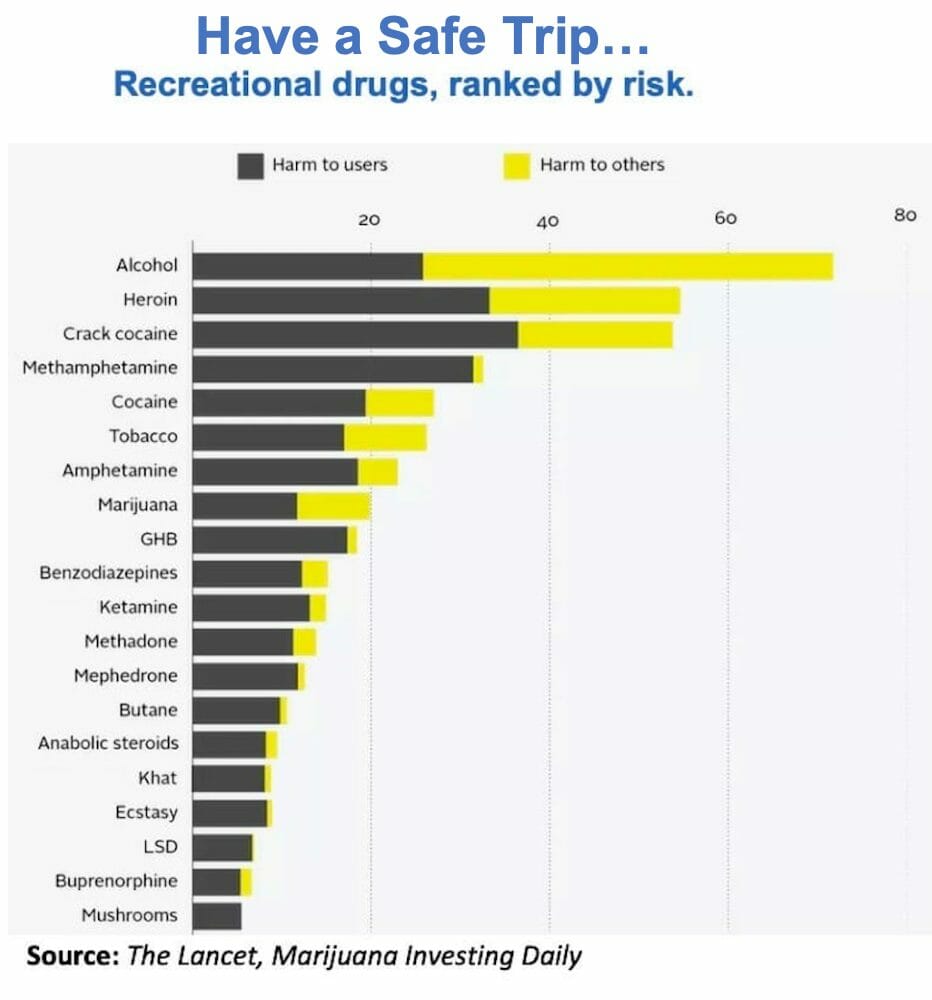 You’ll notice from the chart that alcohol is by far the most dangerous drug, and no one is arguing for a return to the Volstead Act that launched Prohibition in 1919.

But that doesn’t mean marijuana is completely harmless.

In particular, marijuana-related stomach disorders are on the rise. Back when I was a long-haired teenager in the 1970s, the marijuana passed around at rock concerts was milder. Today’s strains are bred to be more powerful, with higher concentrations of tetrahydrocannabinol (THC), the compound in marijuana that gets you “high.”

Paradoxically, marijuana is clinically proven to ease anxiety when appropriately dosed, but has the opposite effect in too high a dose. Edibles and candy bars present a particular problem because they rarely provide dosing instructions.

Some people can experience allergic reactions triggered by marijuana, just as they can with many other plants and pollens. Symptoms can vary from mild to severe, including difficulty breathing; dizziness; fainting; flushed skin; swollen tongue or throat; rapid pulse; and vomiting.

To reiterate, marijuana is a generally safe substance, but any drug…even, say, caffeine…can exert unforeseen adverse reactions. That said, politicians who never liked marijuana legalization to begin with are seizing on the marijuana industry’s growing pains as an excuse to roll-back normalization.

Socially conservative governors in red states (e.g., South Dakota) are striving to prevent initiatives (or even nullify those that have already passed) in their respective states to legalize pot. To buttress their arguments, they cite rising ER visits due to cannabis.

It’s my contention that anti-pot crusaders will ultimately fail in their efforts. There’s considerable money at stake, not just in terms of marijuana sales but also because of the enormous tax revenues generated by pot in states where it’s legal.

Venture capitalists, individual investors, Big Pharma…they’re all pursuing the “green rush” as marijuana is increasingly legalized at the state level. What’s more, several bills are pending in Congress to lift the federal ban on pot.

The genie is out of the bottle. Marijuana is a multi-billion-dollar transnational juggernaut. The marijuana industry can be volatile, but over the long haul, the trend for pot stocks is bullish.

However, there’s still much to learn about the mainstreaming of marijuana and its effects on public health.

For sellers, the lesson is to provide warning labels and dosing instructions. Marijuana dispensaries are increasingly doing just that. For users, the lesson is…take it easy, especially if you’re a newbie. When it comes to pot, less is more.

Editor’s Note: During the COVID scourge, consumers have increasingly turned to cannabis for medical and recreational relief. When the pandemic is eventually over, the fondness for weed will remain entrenched.

Cannabis investments confer market-beating potential and they’re a must for your portfolio. But the key is finding the right pot stocks. You need to conduct due diligence. We’ve done the homework for you. Click here for our free report.