The Big Short’s Next Target

Lately, a lot of people have asked me what is the best way to profit from a big drop in the stock market. They’re afraid that the Delta variant of COVID-19 might once again wreak havoc with the global economy.

I’ll save that debate for another day. But if you want to bet on another stock market crash similar to what occurred 18 months ago, I think Dr. Michael Burry just showed everyone the way.

You may recall that Dr. Burry became famous when he bet on a collapse of the housing market as portrayed in the book and movie, “The Big Short.” Ultimately, his conviction that the mortgage securitization market would suffer massive defaults was vindicated.

Now, Burry has another target in his sights. At last count, his asset management company had sold short more than one million shares of Tesla (NSDQ: TSLA). A short sale is a bet that the price of a stock is about to go down.

Burry believes that TSLA has become grossly overvalued and will soon implode. A lot of people have believed the same thing over the years. Thus far, none of them have been proven correct.

True, TSLA did drop from above $900 to below $600 earlier this year. But that was after it gained more than 900% during the previous year. 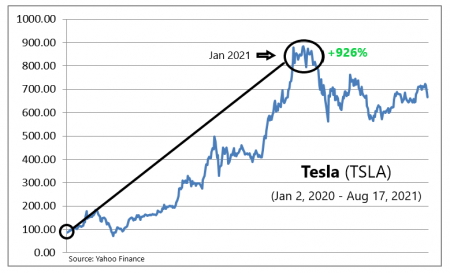 Your timing would have to have been pretty close to perfect to successfully short sell Tesla this year. And now that it has leveled off around $700, it may stay there for a while.

In addition to his big short position in TSLA, Burry also has bought $31 million of put options on the ARK Innovation ETF (ARKK). A put option increases in value when the price of the underlying security goes down.

Not surprisingly, the biggest holding of this exchange-traded fund is Tesla, at more than 10% of the fund’s assets. ARKK’s next largest position is in Teladoc Health (NYSE: TDOC) at 5.6% of assets, followed by Roku (NSDQ: ROKU) at 5.5%.

Needless to say, this fund is not for value investors. More than 80% of the companies it owns have a market cap in excess of $100 billion. All of them trade at very high multiples to sales and earnings.

The fund’s manager, Cathie Wood, is a financial celebrity and darling of social media (that’s a red flag, right there). Wood does not deny that these stocks are trading at huge premiums to the overall stock market. But she believes those premiums are warranted given the upside potential for those stocks over the remainder of this decade.

In a recent tweet, Wood said of Burry: “I do not believe that he understands the fundamentals that are creating explosive growth and investment opportunities in the innovation space.” Perhaps he does not. But then again, a lot of people made similar comments about him shortly before the real estate market went down the tubes 15 years ago.

Last year, ARKK tripled in value. It gained another 20% during the first two months of this year but has since given all of that back and then some.

Despite its recent price weakness, put options on ARKK are not expensive compared to the option premiums for its individual holdings. For example, the put option that expires on January 21 at its current share price could be bought for $12 last week. For that trade to be profitable, ARKK would have to drop 10% over the next five months.

At the same time, a put option for TSLA expiring on the same date and at a similar strike price would require a 14% decline to be profitable. The same is true for ROKU.

Once again, Burry has latched onto a belief and is now relentlessly executing his strategy for cashing in on it. The only question is, will ARKK drop in price before his put options on it expire?

For Burry’s bet to pay off, the stock market must lose the sense of invincibility that has driven it to record highs. And for that to happen, investors will have to become convinced that the economy is slowing down.

That’s why Wall Street is closely following the war of words between Burry and Smith. Only one of them will be proven correct, while the other one will be out a lot of money.

As my article makes clear, there’s seemingly no end to Wall Street’s shenanigans. Are you a risk-averse investor who just wants to sleep better at night? If so, you should keep it simple, by investing in safe, high-yielding dividend stocks.

After months of painstaking research, our investment experts have unearthed five of the best high-yielders. These five buys boast “bulletproof” balance sheets and they’ve weathered every dip and crash over the last 20 years. One of these companies hasn’t missed a single dividend since Richard Nixon was in office…and it’s still a buy! Click here for details.