We’ve all seen the marketing pitches: Portfolio-destroying inflation is around the corner because of reckless government spending and unsustainable debt. Overseas, the world is just one big trouble spot, with geopolitical violence on the rise. So…stock up the bomb shelter! And buy gold!

But here’s the twist: This time around, the perennial gold bugs are actually right.

Stocks have slumped in recent days, as multiple crises emerge. If you’re risk averse and want an easy and safe way to increase your exposure to the Midas Metal, consider the SPDR Gold Trust (GLD).

Launched in 2004, the SPDR Gold Trust was the first gold exchange-traded fund (ETF) available in the U.S. GLD seeks to replicate the performance, net of expenses, of the price of gold bullion. GLD is considered the benchmark for the yellow metal.

The SPDR Gold Trust is the most popular bullion ETF and the most liquid physically backed gold offering available. Rising geopolitical risk (e.g., the collapse of Afghanistan), political dysfunction in Washington, DC, increasing signs of inflation, the spread of COVID Delta, and an overvalued stock market all add up to bullish conditions for gold.

We’re facing a turbulent second half of 2021, including a possible market correction.

Gold is a time-tested hedge against crises, which are multiplying with each passing day. During the Great Recession of 2007–09, the worst economic downturn since the 1930s, gold prices rallied from $840 per ounce at the end of 2007 to over $1,200/oz by the end of 2008, even though inflation over this period stayed in check.

The conditions that are favorable for gold will prove fatal for overvalued stocks that are looking for a trigger to tumble. The rule of thumb is that gold should make up 5%–10% of total portfolio assets.

The yellow metal is poised for a bull run. New data show that the inflation beast is stirring, which means investors will increasingly turn to gold.

To be sure, I don’t think we’ll experience hyper-inflation. There’s still sufficient COVID-induced slack within industrial production and the jobs market to prevent economic overheating. But don’t get complacent; you need to start worrying about rising consumer and producer prices.

Consider this: after 20 years, inflation averaging the Federal Reserve’s target of 2% would slash a dollar’s buying power to 67 cents. Right now, the annual inflation rate (as measured by the consumer price index) for the U.S. is running at about 5.4%.

Growth, with a hedge…

The time to purchase inflation hedges is now, before the rest of the investment crowd tries to get in on the action and pushes up their prices.

As global turmoil and uncertainty show no sign of abating, the SPDR Gold Trust makes an effective hedge to protect you on the downside, while also offering considerable opportunity for appreciation.

Meanwhile, when the much-anticipated stock market correction finally hits, a wide range of overvalued stocks are certain to take a dive.

The SPDR Gold Trust is backed by physical gold and mirrors the price movements of the precious metal. When gold prices are on the way up, as they are today, the biggest profits will come from plays that tag along for the ride.

Gold ETFs hold bullion as their only asset but trade just like regular stocks. They move directly in tandem with gold prices.

Gold prices now hover at around $1,787 per ounce. The analyst consensus calls for gold prices of at least $1,900/oz by the end of 2021. Those projections make gold not just a great way to protect your portfolio, but a smart moneymaking move as well.

The yellow metal maintains its intrinsic value despite a government’s ability to back its currency. Gold also is universally accepted around the world. When markets gyrate, especially due to overseas events such as the fall of the Afghan government to the Taliban, historically the price of gold has tended to skyrocket.

For example, in the 12 months following the horrific attacks of Sept. 11, 2001, gold prices spiked by more than 560%, while equity markets stalled.

During the worst stock bear markets in history, there was an initial crash, followed by a bounce, and then a more severe selloff…a “second leg down.” Let’s turn to the 1970s for another historical case study.

The mid-1970s was a dismal period for stock investors. The S&P 500 fell 20% in the first seven months of 1973. It then bounced 10%, but reversed into a second decline that lasted a year and resulted in a 44.1% drop. Here’s how gold performed during that second leg down: 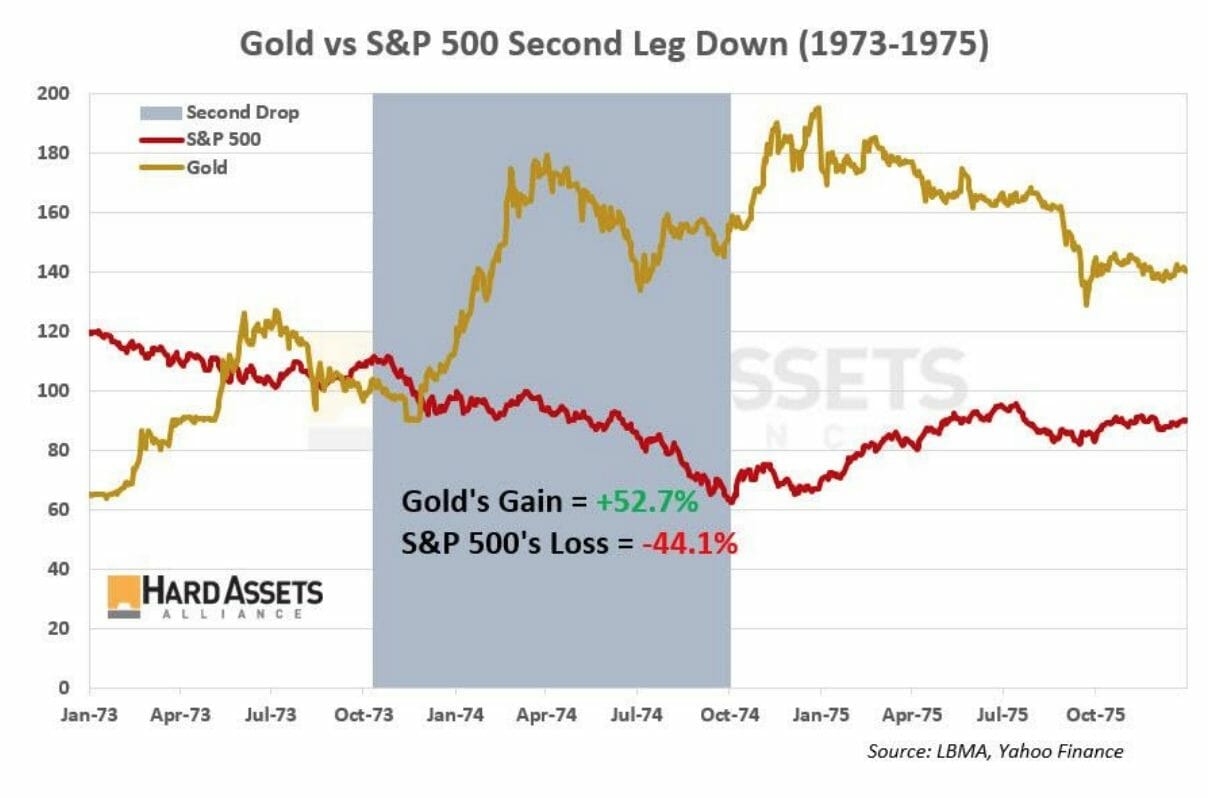 COVID’s deadly toll and unexpected chaos in foreign lands are roiling the global stock markets and setting investors on edge, conditions that are manna for gold investors.

There’s enormous potential this year and beyond for gold prices to rise relative to stocks. Make sure you’re positioned for it. Every portfolio deserves a gold hedge.

Of course, there are other ways to increase your exposure to gold, including gold miners or even physical bullion itself. Your choices depend on your investment profile and tolerance for risk. To learn more about hard asset investing, visit this link.