How to Prepare For The Fed’s Next Move

“Did I miss out on the stock market rally?”

If you’re asking yourself this question, you’re not alone. It’s a popular query lately that turns up millions of results on Google.

And if you’re one of the folks who has been sitting on the sidelines, the short answer is…

Yes. You missed out. Stocks have repeatedly hit new highs this year.

But here’s the good news: The rally probably has much further to run.

Below, I explain why stocks, despite their run-up year-to-date, are still the best game in town. I also provide specific advice for income investors who are getting nervous about shifting Federal Reserve policy.

Worried about monetary policy? A certain asset class makes sense now. I’ll get to that in a minute.

First, here’s a statistic that should embarrass the bears: The S&P 500 has risen 20.41% year-to-date, which ranks fifth in annual price gains over the last 20 years (see my chart). 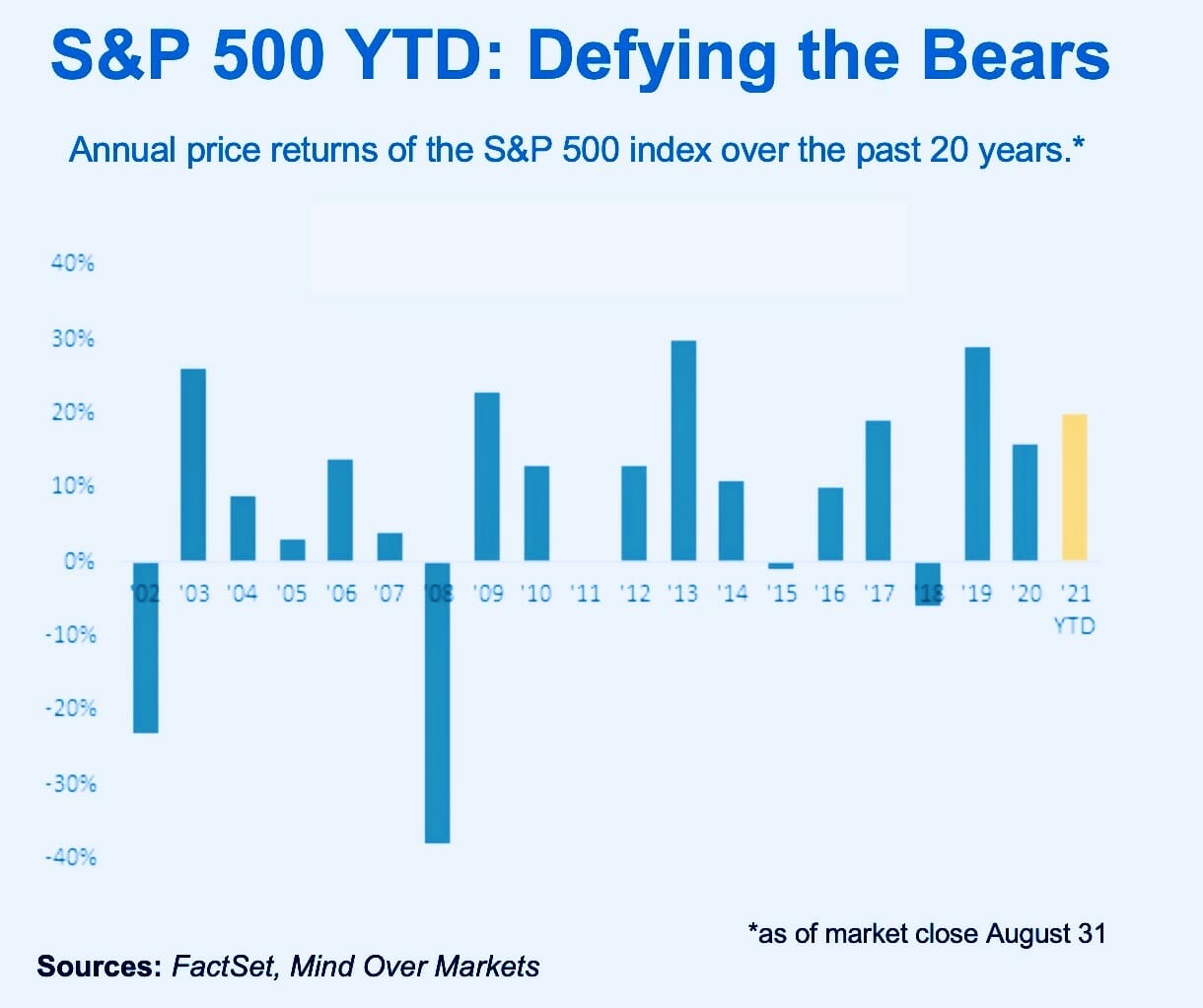 In pre-market futures contracts Wednesday, all three major U.S, stock indices were trading in the green, kicking off September on a positive note.

The S&P 500 index has rallied so far this year, with only two 4% pullbacks. The spread of COVID Delta, rising inflation, the tumult in Afghanistan…these developments have given the crisis-mongers a lot to shout about, but none of it has derailed the bull market. You should always follow the hard economic data, not your fears.

That said, not all of the economic news has been roses. The Conference Board reported on Tuesday that U.S. consumer confidence fell to a six-month low in August.

The Board’s consumer confidence index slipped to a reading of 113.8 this month, down from 125.1 in July. The current reading is the lowest since February. The consensus expectation had been for the index to drop only to 124.0. The Board cited COVID Delta and inflation as the main culprits. But who can blame consumers for being downcast right now? If I watched the cable news opinion shows, I’d be afraid to leave the house.

Fact is, underlying economic and financial conditions are strong enough to keep the rally going into next year. Throughout the global economy, unemployment levels are coming down, central bankers are dovish, interest rates are low, and corporate profit growth is exploding. As I wrote in Tuesday’s column, corporate profit growth in Europe is on fire and far exceeds that of America’s.

Read This Story: Send Your Portfolio to Europe

Of course, you can never rule out a “black swan.” That’s the devilish thing about black swans: by definition, they’re unforeseen shocks.

But for now, many aspects of the financial picture appear calm. Interest rates remain at historically low levels, with the Federal Reserve vowing to refrain from a rate hike until 2023. For the most part this summer, yields have been treading water.

This time around, there was no “taper tantrum” on Wall Street, because Powell also signaled that a rate hike was a long way off and he reaffirmed the Fed’s generally dovish stance.

Massive quantitative easing (QE) was initiated in early 2020 to counteract the severe economic damage from the coronavirus outbreak. Rational policymakers understand that crisis conditions (and concomitant remedies) don’t last forever. As the economy heals, the punch bowl will be incrementally withdrawn.

The first so-called taper tantrum occurred in mid-2013, when the Fed announced it was considering how to wind down its extraordinary stimulus. That mere chatter prompted a moderate correction among stocks, especially dividend payers. Notably, over the course of seven weeks, the Dow Jones Utilities Average fell 13.4%.

However, this time around, the eventual rate-hike cycle will be necessarily gradual, due to lingering slack in the jobs market and economy. In other words, it will still be quite some time before Treasury rates rise to a level that’s competitive with utility and other dividend stocks.

Headline risk (e.g., the unexpected chaos in Kabul) means the rally will be punctuated by selloffs. But for investors with a long-term perspective, I believe such market overreactions create buying opportunities.

If you’re hunting for reliable income, electric utilities make excellent proxies for dividend stocks. The benchmark PHLX Utility Sector index has gained 8.72% year to date, which is a strong showing in light of the fact that its holdings are geared for safety and income.

But not just any utility will do. Using rigorous criteria, we’ve pinpointed the highest-quality equities in the sector. With investors holding their breath every time the market stumbles, it makes sense to put some of your money into these stable, high-income generators.

Utility stocks are classic safe haven investments, but the best utilities boast additional characteristics that give them the ability to outperform. For best-of-breed utilities stocks to buy now, click here.

John Persinos is the editorial director of Investing Daily. He also edits our premium publication, Utility Forecaster. Send your questions or comments to mailbag@investingdaily.com.