Narcs (Yep, Narcs) Give Thumbs Up to Pot, Shrooms

For as long as I can remember, movies and television shows have perpetuated the ”narc” stereotype: square-jawed guy in sunglasses, wearing a dark suit and driving a nondescript four-door sedan. Standard issue sidearm in holster. Squinting, tight-lipped. Scourge of pot smokers and acid heads.

This week, yet another drug-culture stereotype bit the dust.

Federal narcs just gave an enthusiastic thumbs up to a massive boost in the production of marijuana and the psychotropic substances within magic mushrooms. That’s a paradigm shift. It’s also good news for investors in cannabis and psychedelics.

As a journalist, I routinely scour the Federal Register. It’s a daily habit that often bears fruit for my reporting. The latest Federal Register item to catch my eye was a notice, published Thursday, September 2, in which the U.S. Drug Enforcement Administration (DEA) proposed an historic increase in the federally monitored production of marijuana. The DEA also seeks truly huge quantities of psilocybin and psilocin, the key active ingredients in magic mushrooms.

The resultant production would be used for research purposes, with the goal of expediting the development of new federally approved medications.

In the notice, the DEA stated that it’s proposing “significant increases” in government-mandated manufacturing of “the schedule I substances psilocybin, psilocin, marihuana, and marihuana extract, which are directly related to increased interest by DEA registrants in the use of hallucinogenic controlled substances for research and clinical trial purposes.”

The notice went on to state: “DEA firmly believes in supporting regulated research of schedule I controlled substances. Therefore, the [Aggregate Production Quota] increases reflect the need to fulfill research and development requirements in the production of new drug products, and the study of marijuana effects in particular, as necessary steps toward potential Food and Drug Administration (FDA) approval of new drug products.”

Each applicant will then be authorized to cultivate marijuana, psilocybin, and psilocin, up to allotted quotas, in support of DEA-licensed researchers across the nation.

The tone of the DEA’s notice in the Federal Register strikes me as revealing. It’s downright…progressive. It reflects the revolution in government thinking about marijuana and other drugs.

The cannabis community is all abuzz (so to speak). This tweet posted September 1 is emblematic of what I’ve been seeing on social media: 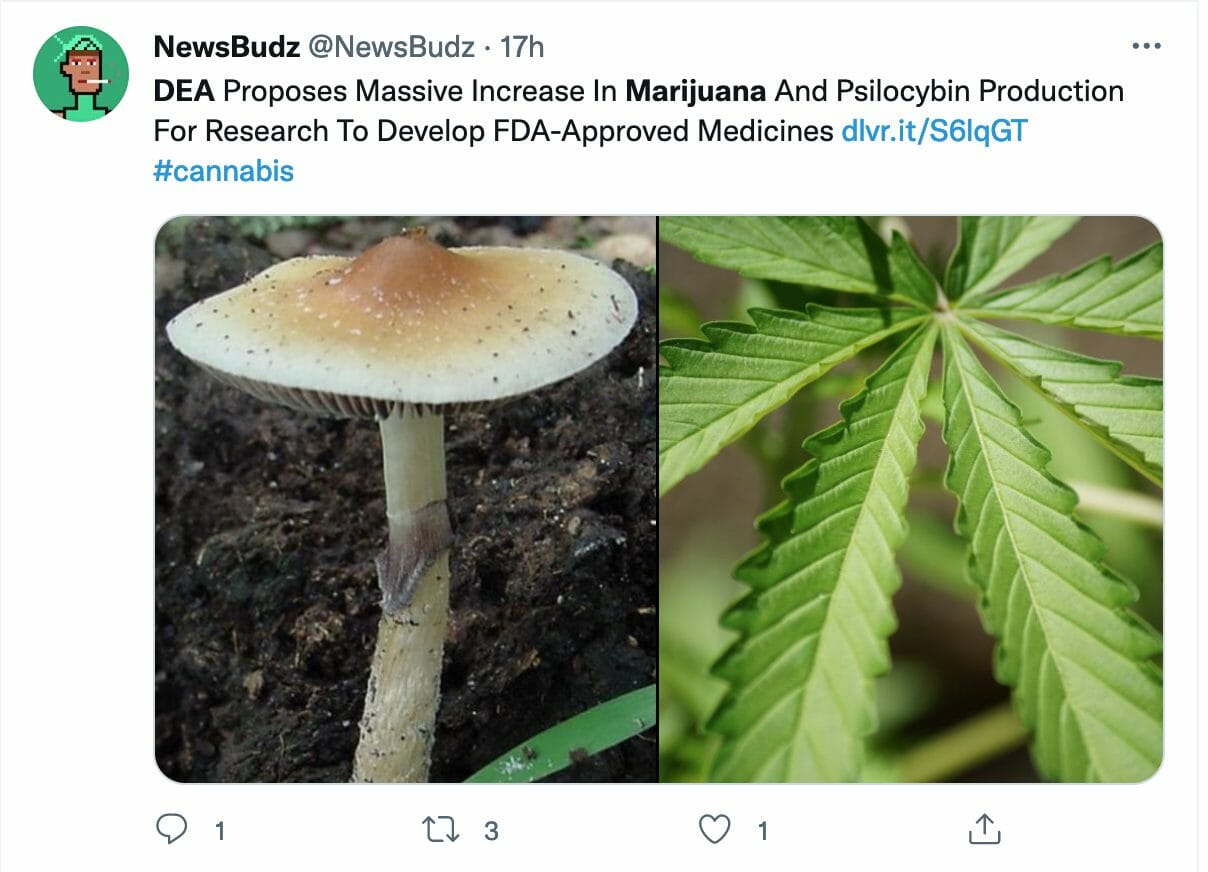 For 2021, the DEA proposes a production of 2 million grams of marijuana (roughly 4,400 pounds), representing a 500,000-gram hike for its initial quota for the plant for this year. It’s also asking for the manufacture of 500,000 grams of cannabis extract, which is more than double its original quota.

For psilocybin and psilocin, the DEA significantly boosted its production goals. The quota for psilocybin has been revised upwards to 1,500 grams, an increase of 2,900% (that’s not a typo). DEA also wants to manufacture 1,000 grams of psilocin, instead of just 50 grams as initially proposed. Interested persons may file comments on the DEA’s notice on or before October 4, 2021.

Since June 1971, when President Nixon launched his “War on Drugs,” America has spent over a trillion dollars enforcing its drug policy, according to research from the University of Pennsylvania.

In 1981, the federal budget for drug abuse prevention and control was about $1 billion. By 2020, that number had reached $34.6 billion. A major beneficiary of that largess: the prison-industrial complex. A major loser: minorities, who have incurred a disproportionate amount of arrests and incarcerations.

Over the past 50 years, the War on Drugs hasn’t stopped illegal drug use, but it has succeeded in ruining lives and communities. The war certainly did little to stem the deadly abuse of legal painkillers, such as opioids.

A related news item: A federal bankruptcy judge gave conditional approval Wednesday to a sweeping deal that lets the Sackler family off the hook, and leaves families of OxyContin victims feeling aggrieved.

The settlement removes the Sackler family from ownership of Purdue Pharma, maker of OxyContin, and devotes potentially $10 billion to combating the opioid crisis that has killed about 500,000 Americans over the past 20 years. The Sacklers are shielded from future lawsuits and that’s got a lot of people angry. We’ll see how this story plays out. Legal appeals are likely.

Read This Story: Cannabis as a Cure (Yes, a Cure) for Addiction

These and other injustices are causing an increasing number of elected officials, both liberal and conservative, to demand a cessation of the narc’s long reign of persecution.

The upshot: When the DEA gives an enthusiastic nod to significantly boosting the nation’s supply of marijuana and psychedelics, you know that federal legalization of these substances is only a matter of time.

As an investor, always be proactive. Pot, magic mushrooms, and even LSD are going mainstream. You should invest before the lifting of federal bans against these increasingly popular substances.

I’ve just described trends that are generating tailwinds for publicly traded marijuana and psychedelics companies. Looking for ways to profit? Click here for our free report.