Something weird is going on in the labor market. The data is conflicting and nobody seems to really know why. That’s a concern since jobs are so closely intertwined with economic growth.

Further below, I’ll explain how you can profit from a major reversal in the housing market if the jobs data proves unreliable. But first, let’s look at the recent data:

Those data points come amid the backdrop of a stock market rally that pushed all of the major indices to an all-time high last week. The S&P 500 Index gained nearly 3% in August while the NASDAQ Composite Index did even better, up 4%.

Doubtless, a drop in jobless claims and unemployment is good news for the stock market. More jobs mean more consumers spending more money. It’s as simple as that.

However, the huge shortfall in private payroll gains suggests that not all is well with the jobs market. Presumably, a lot of the people that lost their jobs during the pandemic have stopped searching for new jobs.

We will soon know if that is the case. On September 6, three unemployment benefit programs established under the CARES ACT eighteen months ago are due to expire.

Last month, more than ten million Americans were still receiving benefits from this program. Pretty soon, a lot of those folks will need to go back to work.

The key question is, will there be enough jobs for the people looking for them this month? Perhaps not, if the recent resurgence of COVID-19 is not soon quelled.

Of the 374,000 jobs added last month, over half of them were in the leisure/hospitality sector. Most of those jobs are in restaurants and hotels, the same businesses that would suffer the most if severe social distancing restrictions are reimposed.

That dynamic lays the groundwork for a potential stock market correction this fall. Not only are the CARES Act unemployment benefits ending this week. At the end of this month, the eviction moratorium for multifamily properties is set to expire, too.

I don’t know how this is all going to play out. However, it is not difficult to imagine a scenario that results in a domino effect of cascading economic calamities.

For the past 18 months, the federal government has done everything in its power to stimulate the economy. And for the most part, those programs have worked as intended.

But once that money runs out, the ability of many families to pay their bills and avoid foreclosure will fall squarely on the shoulders of the jobs market. And right now, it is not clear if the jobs market is as strong as it needs to be to prevent a wave of defaults and foreclosures over the remainder of this year.

That concern is apparent in the drop in consumer confidence last month. Last week, The Conference Board announced that its Consumer Confidence Index fell from 125.1 in July to 113.8 in August.

That is its lowest reading since February, just before the rollout of several COVID-19 vaccines allowed the economy to rapidly reopen. Since then, it has increased every month until now.

Do the folks surveyed by The Conference Board know something that the rest of us do not? Perhaps they know that without the federal assistance they have been receiving, they would be in serious financial trouble.

If true, that creates a trading opportunity for investors looking for a way to play a slowdown in the jobs market. Demand for housing of all types tends to rise and fall with the directional trend in employment.

For that reason, I believe that real estate investment trusts (REITs) that own multifamily housing properties are most at risk if the jobs market weakens. One such REIT is the iShares Residential and Multisector Real Estate ETF (REZ). This fund owns shares of 42 REITs so it is broadly representative of the entire sector.

To be clear, I like REZ. In fact, I hold it in the Personal Finance Fund Portfolio as an inflation hedge. Over the past 12 months, REZ has returned nearly 50% in dividends and share price appreciation. 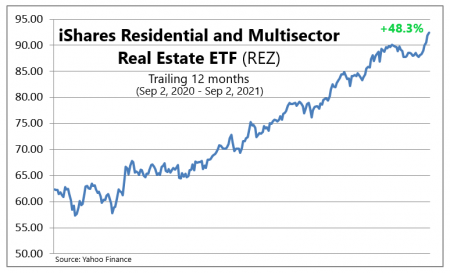 I’m not going to sell REZ out of my fund portfolio even though I believe it may take a hit this fall. I believe REITs such as REZ are one of the best ways to generate high income in retirement. But I might buy a put option on it to protect my position in it. A put option increases in value when the price of the underlying security goes down).

If you don’t already own REZ, you may want to consider buying a put option on it as a speculative bet that the multifamily housing market will soon take a hit. With so much conflicting jobs data out there, Wall Street may be caught off guard if it turns out the economy isn’t as strong as it thinks it is.

Looking for an investment that should prosper, regardless of the economy’s ups and downs? Our analysts have pinpointed a firm that’s the world’s only producer of a rare, futuristic material that’s essential for biological medicine, the Internet of Things, aeronautics, autonomous vehicles, microchips, 5G telecommunications, and other leading-edge technologies. Click here for details.