We have all heard the mantra that in the long run stocks outperform all other asset classes. Over the past 20 years, the SPDR S&P 500 ETF Trust (SPY) has gained nearly 500%. That is a great return and in hindsight appears to be a no-brainer approach to investing.

But you can be forgiven for not having the courage to go all-in on stocks 20 years ago. At that time, investors were still reeling from the “dot-bomb” collapse that sent the entire stock market into a prolonged correction.

But stocks always go up in the long run, right? Well, not all of them. Below are four stocks that are still worth less today than they were more than 20 years ago. More surprisingly, they are all household names that at one time were considered some of America’s best companies. But these angels have since fallen from grace.

(Note: All share prices quoted have been adjusted for stock splits but do not include cash dividends.)

In July 2000, General Electric (NYSE: GE) topped out above $440. Last week, it closed near $105. You would have to go back in time 25 years to have a profit in GE if you bought it back then. That is a sad commentary on a company that was regarded as one of this country’s most innovative businesses (and is trying to reclaim that crown by investing heavily in renewable energies). 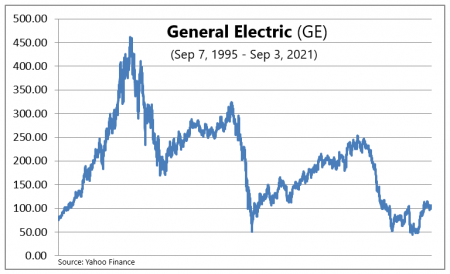 From a much shorter-term perspective, GE has performed well. During the past year, its share price has doubled. However, it will have to do that two more times just to get back to where it was trading at the start of this century.

Another great American business, Ford Motor Company (NYSE: F), is also worth about the same now as it was 25 years ago. In January 1999, Ford topped out above $36. Six months ago, Ford suspended its dividend so it could use that capital to restructure its operating model. 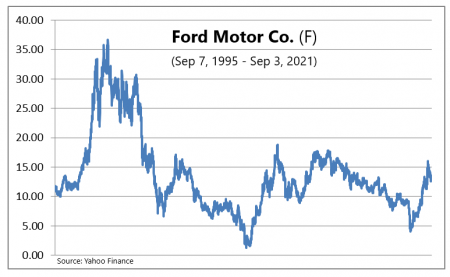 That strategy appears to be working. Since bottoming out below $6.50 last September, it has rallied strongly to trade above $13 last week. Driving that surge is Ford’s decision to pivot towards electric vehicles, including its popular F-150 pickup truck.

True, cruise ship operator Carnival Corp. (NYSE: CCL) was dealt a bad hand by the coronavirus pandemic. In January 2000, CCL was trading above $51. Just four months later, CCL fell below $8 as the company shut down all of its cruise operations indefinitely. 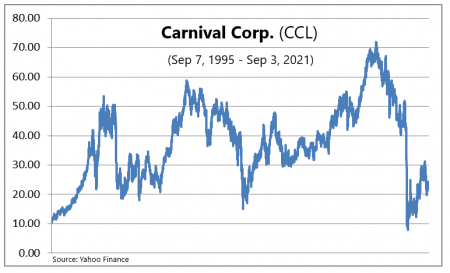 Only now is Carnival getting back to some sense of normalcy. Last week, the company announced that it will restart several of its cruise schedules in November. Despite that good news, CCL closed last week below $23. That is the same price you could have bought it for in 1997, and is well below its all-time high price above 71 achieved four years ago.

As rough as the past two decades have been on the companies above, Xerox Holdings (NYSE: XRX) has fared considerably worse. Since peaking above $163 in June 1999, XRX tumbled all the way below $13 just two years later after the company was prosecuted for accounting fraud. 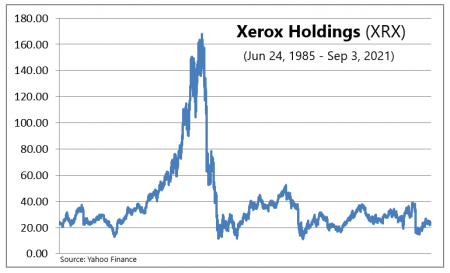 Believe it or not, Xerox’s closing price last week beneath $23 is less than what it was trading for in June 1985! That is more than 36 years of absolutely no financial gain whatsoever for owning shares in a company that was once a proud member of the “nifty fifty” fraternity of blue-chip stocks.

Of course, the four stocks above are unusual in that they have failed to deliver positive total returns over such a long period of time. However, they are not the only ones to do that. Over the same span, General Motors (NYSE: GM) declared bankruptcy, so its shareholders lost everything!

That is why using an investment strategy that can adapt to changing times is so important. And right now, I see a new investment opportunity that could push a handful of stocks considerably higher very soon.

One stock that has avoided the fate of the four I’ve just mentioned is, of course, Apple (NSDQ: AAPL). This consumer electronics giant is synonymous with technological disruption. On September 14, Apple could disrupt the world yet again, with four simple words: “Introducing…The Apple Car.”

Make one move today and you’ll lock in your shot at a potential $190,717 payday when Apple drops its bombshell news. (And no, the big winner won’t be Apple.) Don’t delay; you’ll want to get this profit-making information ahead of the investment herd. Click here for details.