Perhaps Arnold Schwarzenegger (the former Governator of Cullyfornia) put it best: “Marijuana is not a drug. It’s a leaf.”

That seems to be the prevailing sentiment in Washington, DC. Marijuana stocks have been rising across the board in recent days, and small wonder. As September unfolds, the Biden administration has accelerated its efforts to chip away at federal laws that restrict marijuana and psychedelics.

What the White House can’t accomplish legislatively in Congress right now in terms of drug law normalization, it’s attempting via the bureaucracy. With major bills to decriminalize marijuana stalled in a gridlocked Congress, the enemies of the War on Drugs are turning to the executive branch’s vast apparatus of rules and regs.

Latest case in point: The Biden regime on September 2 proposed a major change to the federal drug scheduling system with the goal of expediting research into Schedule I controlled substances, including marijuana and psychedelics such as psilocybin.

The White House Office of National Drug Control Policy (ONDCP) stated in a letter to the leaders of both parties in Congress that it seeks to encourage research into these substances, by streamlining the registration process for scientists to access Schedule I drugs in the same way they can currently access less-restricted Schedule II substances.

ONDCP portrayed the move as a means to fight the abuse of pharmaceutical fentanyl, a synthetic opioid painkiller that’s 50 to 100 times more potent than morphine. Fentanyl addiction and deaths are an epidemic in America, and cannabis and psychedelics are seen by many health experts as non-deadly and non-addictive substitutes to treat severe pain (see tweet). 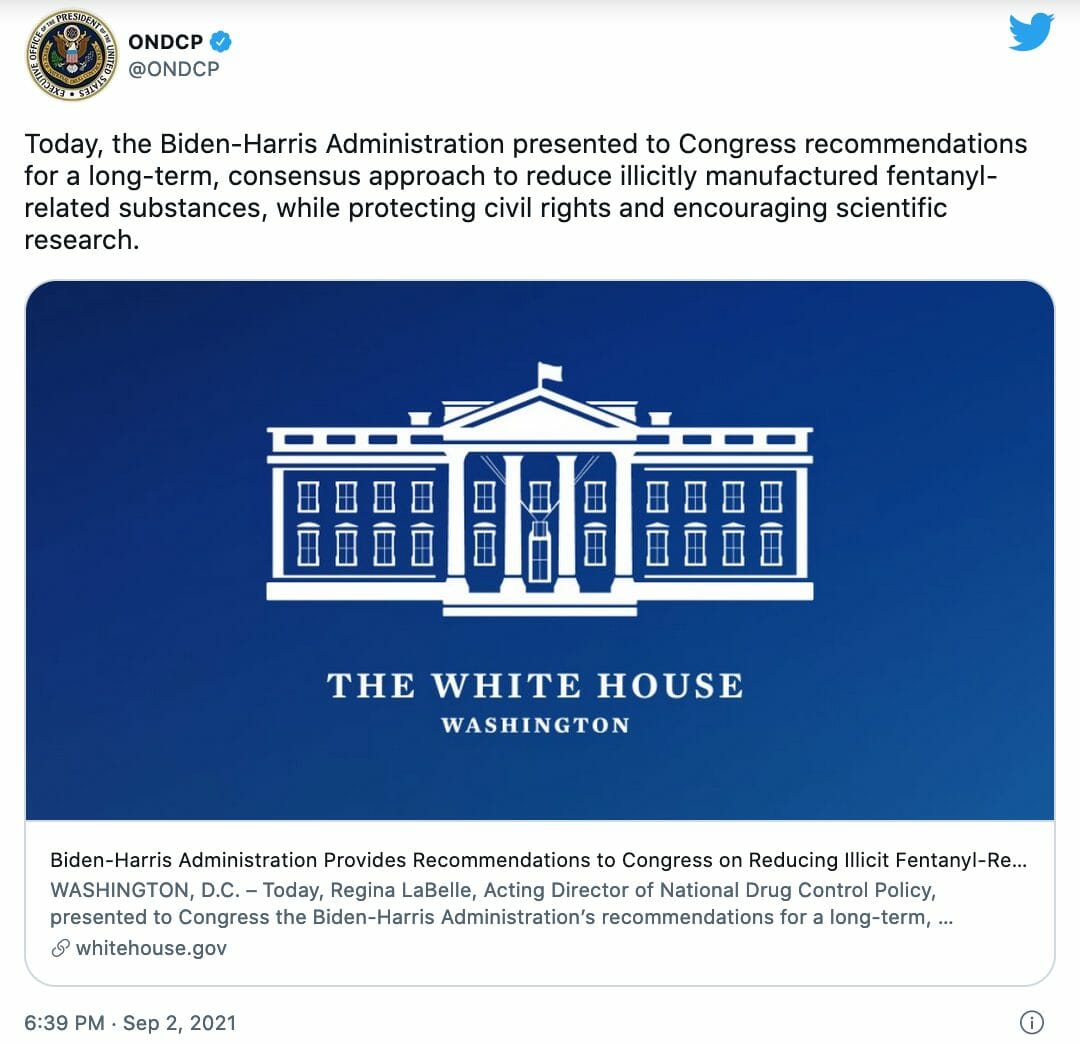 Drugs, substances, and certain chemicals used to make drugs are classified by the U.S. Drug Enforcement Administration (DEA) into five distinct schedules (i.e., categories) depending on the drug’s acceptable medical use and the drug’s abuse or dependency potential.

Schedule I drugs aren’t considered safe by the federal government, even under medical supervision. Heroin, peyote, marijuana, and various psychedelics (e.g. LSD) fall into Schedule I, under the Controlled Substances Act (CSA). The CSA was passed in 1970 and became a cornerstone in the now-discredited War on Drugs.

Cutting through the red tape…

Under the current process, both Schedule I and Schedule II registration applications with the DEA must include a research plan, details about storage and security, and extensive corroborations of scientific qualifications to pursue the proposed studies.

There’s an additional hassle for scientists seeking access to Schedule I drugs. They must have the Secretary of Health and Human Services “determine the qualifications and competency of each practitioner requesting registration, as well as the merits of the research protocol.”

Researchers have complained that the process to get approved for studying Schedule I drugs is unduly lengthy. This obstacle in turn harms the ability of the private sector to leverage cannabis and psychedelics for medical treatments. Without the spin-off effect of government-approved research, the financial viability of publicly traded companies in these areas would be seriously impeded.

ONDCP’s new effort to streamline research into Schedule I drugs reflects an emerging theme in the Biden White House that bodes well for investors. Notably, the DEA recently proposed a massive increase in the federally monitored production of marijuana.

The DEA also seeks huge quantities of psilocybin and psilocin, the key active ingredients in magic mushrooms. The resultant production would be used for research purposes, with the goal of fast-tracking the development of new federally approved medications.

The trend is clear: marijuana is becoming a commonplace consumer product. New efforts to lift pot restrictions result in new customers for the purveyors of weed.

Looking to make money from the marijuana bonanza? Applying rigorous criteria, our stock-picking experts have unearthed hidden gems in canna-business that most investors don’t even know about. Click here for our marijuana report.