In these strife-torn times, there seems to be at least one thing that unites humanity around the world: the need to get high.

Research firm BDSA recently estimated that global cannabis sales reached $30.6 billion in 2021, for both recreational and medicinal varieties. BDSA projects that pot sales will more than double to exceed $62 billion by 2026.

In a separate report released in April, research firm New Frontier Data found that a majority (53%) of U.S. adults have consumed cannabis with THC.

A recent survey by Gallup came to the same conclusion: about half the country has tried weed in one form or another. Gallup also found that more than one in 10 Americans reported that they actively smoke marijuana on a regular basis. Gallup has been polling Americans about their marijuana consumption habits since 1969, when only 4% reported trying marijuana. For decades, the percentage of Americans who said they’ve actually tried pot hovered in the 30% range.

As an increasing number of U.S. states legalize marijuana, marijuana is becoming more of a commonplace habit among Americans. But weed’s widening prevalence in daily life is a global phenomenon.

Asia is the world’s most populous region, so it stands to reason that the region is home to the highest number of marijuana consumers, at an estimated 93.8 million. However, Asia has comparatively lower cannabis usage rates, giving it the world’s largest number but lowest density of cannabis consumers.

The New Frontier survey measured adult populations (ages 15 plus). North America, with an estimated 49.6 million cannabis consumers, is home to the highest rates of cannabis use. The following chart tells the global story: 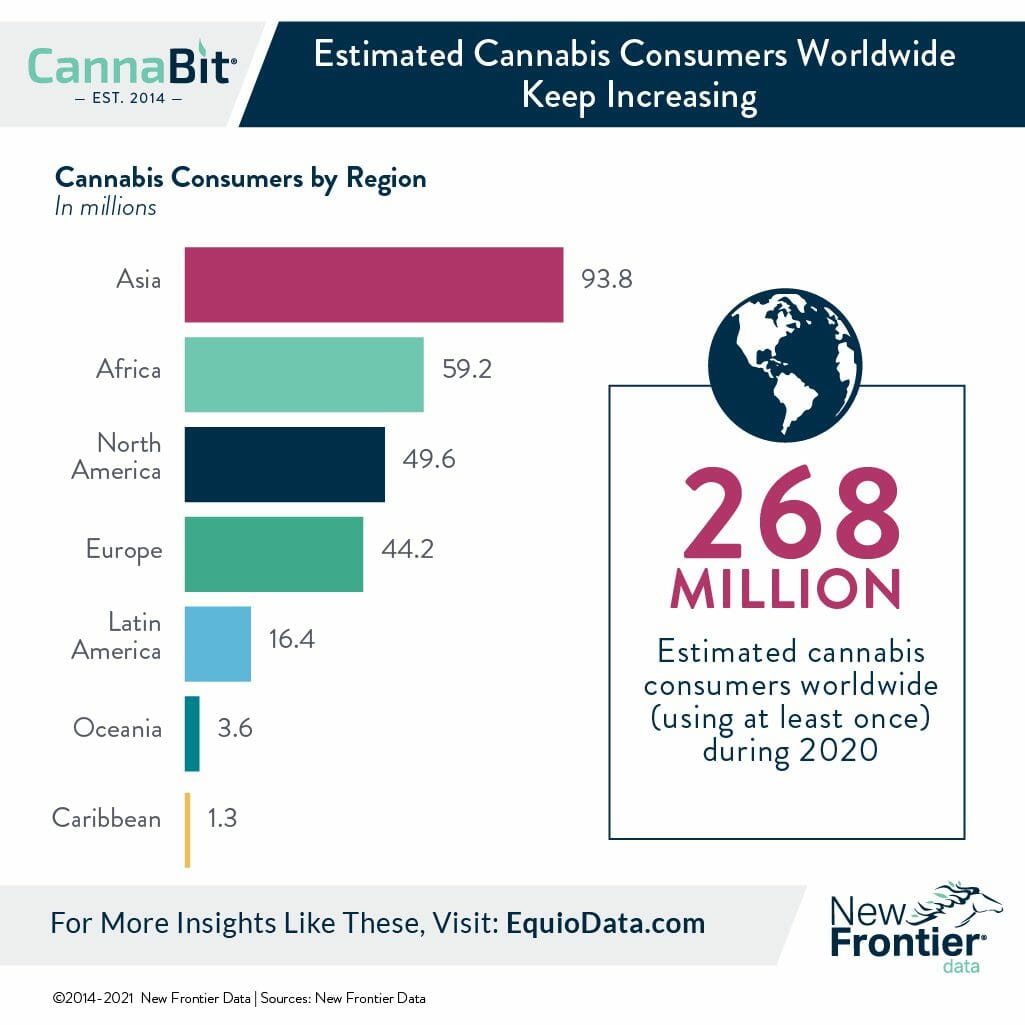 The U.S and Canada top the list of cannabis use largely because of their affluent and socially tolerant societies. Marijuana legalization has made huge strides in both democracies, making them beacons for pot advocates and incubators for canna-businessses.

Canada has been in the vanguard of the marijuana revolution. In October 2018, the Great White North legalized on the federal level the possession and use of recreational marijuana. Canada was the first G7 nation to take this step. In 2013, Uruguay became the first country in the world to legalize marijuana.

Mexico recently became the latest country to fully legalize possession and use for adults, a move that will serve to spur similar developments in other countries, especially Latin America. Mexico is now positioning itself as a low-cost alternative to marijuana that’s grown in the U.S. and Canada.

In the U.S., as the coronavirus pandemic exerts lingering economic and social damage, nearly half of American cannabis consumers reported using cannabis to alleviate stress and anxiety. The rise of the work-at-home culture also is pushing marijuana sales higher. Hence, the robust rise year-to-date of marijuana equities. In the marijuana sector, rising revenues and profits are translating into higher share prices.

The key impetus for marijuana legalization around the world has been medical. National programs for legal medical marijuana represent a crazy quilt of different rules and regs, but the result is the same: greater access to pot and with it, more ways for businesses and investors to make money.

An estimated 4.4 million active medical cannabis patients currently access legalized, high-THC products. The number of patients in those programs is projected to grow by more than 2 million over the next five years, to a combined 6.5 million worldwide by 2025.

Looking for ways to profit from the global mainstreaming of cannabis? If you haven’t already invested in marijuana, it’s high time (so to speak) that you did.

The trends that I’ve just described are resistant to short-term economic downturns. That’s why I urge you to read my new book: The Wide World of Weed and Psychedelics. It’s your definitive guide for making money in the thriving cannabis and psychedelics industries. Click here to get your free copy.