When rock musician Jimi Hendrix released his debut album Are You Experienced in 1967, he was referring to the life-changing experience of lysergic acid diethylamide (LSD).

These days, a lot of ordinary consumers are becoming experienced with LSD, and efforts are accelerating to lift prohibitions against the drug.

Latest case in point: Currently under consideration in the California Assembly is a bill that would allow those 21 and older to possess LSD for personal use and “social sharing.” The proposed bill also covers psilocybin (the hallucinogenic component of magic mushrooms), dimethyltryptamine (DMT), ibogaine, mescaline excluding peyote, and 3,4-methylenedioxymethamphetamine (MDMA, often called ecstasy). See the following tweet, posted last week: 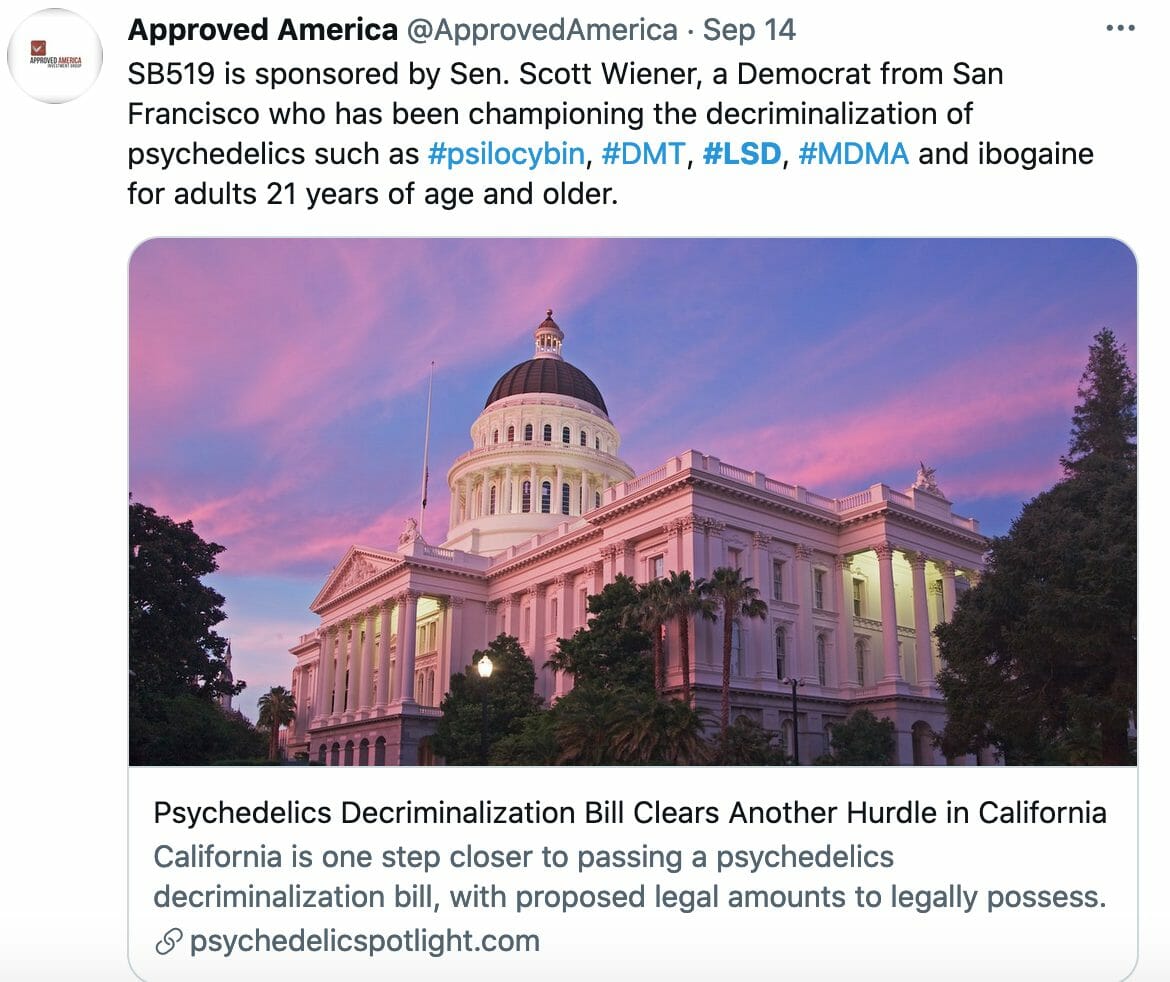 The proposed psychedelics law was passed by the California Senate during this year’s legislative session and was taken up by the Assembly, which is the lower house of the California State Legislature. Deliberations over the bill are expected to carry over into 2022.

California was the first in the U.S. to decriminalize medical marijuana in 1996; the Golden State seems poised to be the first to do the same for LSD.

The potential for investors to profit from the increasing respectability of LSD is enormous. Pharmaceutical companies are engaged in a race to develop LSD-based treatments. Marijuana companies are making plans to branch out into psychedelics, for medical as well as recreational purposes. A new industry is in the throes of being born. Early investors stand to make fortunes.

Lucy in the sky, with profits…

LSD is a Schedule I substance, which means the U.S. Food and Drug Administration designates the drug as one of the most dangerous substances and it’s banned on the federal level. Possessing any amount and any form of LSD is illegal in all 50 states. But efforts are underway in several states and localities to follow California’s lead in various capacities, including Washington DC, Michigan, Massachusetts, and Oregon.

Known colloquially as acid, LSD is synthesized in the lab. Discovered in 1943 by a Swiss chemist, LSD was used in various CIA and U.S. Army “thought control” experiments during the Cold War. The drug seeped into civilian society and became popular with the youth movement of the 1960s, spawning that era’s psychedelic culture.

As Beatle John Lennon once said: “We must always remember to thank the CIA and the Army for LSD.”

But LSD isn’t just for rebels and long-haired rock musicians anymore. An increasing body of research shows that the drug has medicinal benefits, and it can help alleviate depression, post-traumatic stress disorder, and other psychological ailments.

Read This Story: Military Says Yes” to Pot and Psychedelics

Lawmakers on Capitol Hill in recent days have introduced a series of drug policy-related amendments to the Pentagon’s budget appropriation for 2022, including proposals to expedite research on the benefits of psychedelics (e.g., LSD and magic mushrooms) for active duty military personnel.

The doors of perception…

So how exactly does LSD work?

Scientists generally agree that LSD is non-addictive with low potential for abuse. That said, LSD sometimes causes adverse psychological reactions, such as anxiety and paranoia, depending on the individual. In drug culture argot, it’s known as a “bad trip,” and it’s why some health experts remain opposed to lifting bans against the drug.

There are many ways to take LSD: tablets, liquids, thin squares of gelatin, or soaked in blotter paper. The latter is the most popular.

LSD causes its hallucinogenic effects through its interaction with the brain’s serotonin receptors. Serotonin is a neurotransmitter that governs behavior, mood, senses, and thoughts. The drug breaks down the parts of the brain that usually separate different functions (such as vision, sound and movement) to create a more integrated experience.

Usually, the first effects of the drug when taken by mouth are felt 30 to 45 minutes after ingestion, peaking at two to four hours, and may last about 12 hours or more. “Flashbacks” have been known to occur several months (or even years) later.

LSD also is capable of generating mystical experiences and ego disillusion. Many religions and spiritual beliefs, especially Buddhism, teach that the path to enlightenment involves effacement of the ego. Psychedelics such as LSD help toward this goal, as described by Aldous Huxley in his 1954 book “The Doors of Perception” (from whence the rock group “The Doors” got its name).

From mushroom caps to small-caps…

These days, everyone from Silicon Valley executives to suburban soccer moms are taking LSD, often in micro-doses, to treat physical or psychological pain or to tap creative energies. Of course, these “trips” are technically illegal. But not for long.

It all adds up to enormous momentum for companies involved in marijuana and psychedelics. In recent months, the first biotechnology firms to develop medical treatments from psychedelic drugs such as LSD and magic mushrooms (psilocybin) have gone public on Canadian stock exchanges. The small-cap markets have been invaded by a slew of psychedelics stocks to watch, thanks to new company initial public offerings.

Cannabis already is Big Business and as such, the major pot players are getting ready to co-opt the psychedelics movement through internal investments and mergers and acquisitions. Marijuana stocks have been surging so far in 2021; cannabis companies that are flush with cash are eyeing LSD and magic mushrooms as strategic investments.

I’m monitoring the nascent movement to bring LSD into the mainstream. In the meantime, we’ve pinpointed the best cannabis investments available. Click here for our free report.