You Have Questions, We Have Answers

Readers of this newsletter are a tenacious and resourceful bunch. They find all sorts of ways to contact me with their comments and questions. Don’t hesitate to reach out!

The best venue for correspondence is our official email address: mailbag@investingdaily.com. (And look for my next “Weekly Weed Report” video presentation on Thursday, March 24.)

It’s useful for me to occasionally step back and see what’s on your minds. Here’s a representative example of the missives I’ve recently received from readers, with answers that should provide profitable insights for marijuana investors of all types.

“Where do we stand with state legalization of marijuana? There’s been such a flurry of activity, it’s hard to keep track.” — Paul N.

As of this writing, a vast swath of America now has access to state-legal cannabis, which is good news for pot investors.

“Why didn’t marijuana dispensaries get clobbered during the coronavirus pandemic? So many other industries have suffered, but not pot, it seems.” — Sam J.

The state-legal cannabis industry is enjoying massive growth, in large part thanks to the coronavirus pandemic.

For many Americans, stocking up on pot has become as essential as stocking up on milk, and that bodes well for marijuana sales, well into the next decade.

Take a look at the following chart, released March 21, by the research group New Frontier Data: 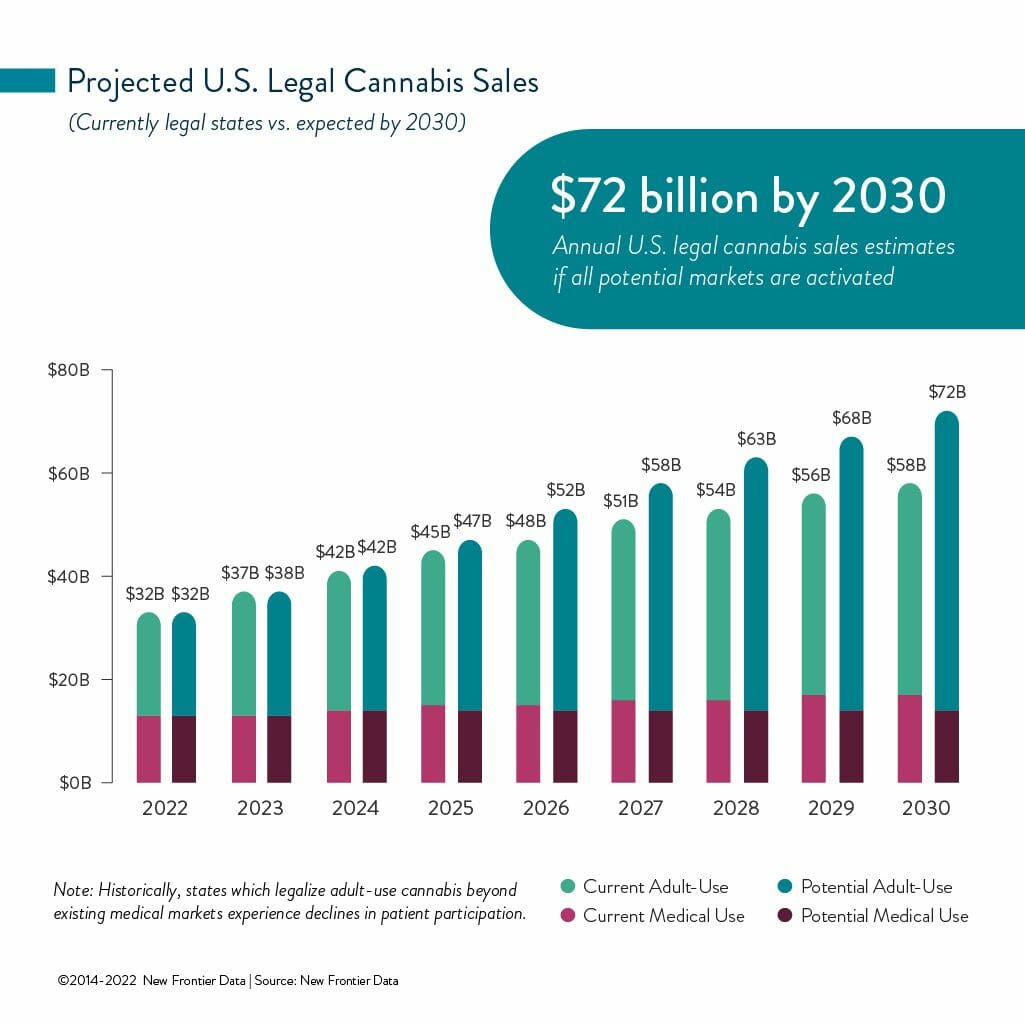 The efforts of canna-businesses to develop technology and operational logistics to meet demand during the pandemic will pay off in coming years. The health exigencies of the coronavirus crisis accelerated the development of much-needed marijuana infrastructure. Over the last several months, marijuana entrepreneurs have planted the seeds of future prosperity.

“Why are so many marijuana companies based in Canada?” — Matt G.

When it comes to legalized marijuana, Canada is in the vanguard. Our neighbors to the north have always had a permissive and tolerant society. This attitude has extended to marijuana.

In October 2018, Canada legalized on the federal level the possession and use of recreational marijuana. Canada was the first G7 nation to take this bold step and it triggered an earthquake in the worldwide marijuana industry.

Survival of the fittest…

“There are all sorts of marijuana niches, What sort of pot company do you think stands the best chance of surviving the brutal competition?” — Lucas C.

I foresee continued consolidation. Weak companies will go bankrupt and disappear altogether. Other companies that provide a valuable product or service but lack a competitive edge will get acquired. We’re already seeing a flurry of merger and acquisition activity among marijuana companies.

Avoid companies that provide the marijuana plant as just a commodity. Growing a marijuana plant isn’t a unique capability; those firms involved in tasks that are easily replicated will suffer from “commoditization” and a downward pressure on prices.

“Proposals to remove the federal ban on marijuana seem stalled in Congress. Will they ever pass?” — Robert P.

Several bills to normalize marijuana laws are bottled up in congressional committees, as the Biden administration turns its attention to other priorities and political partisanship on Capitol Hill gets worse ahead of the 2022 midterms. The Russia-Ukraine war is hogging the headlines. But the table is set for the federal ban to eventually fall by the wayside.

The Cannabis Administration and Opportunity Act (CAOA) would prevent Americans from getting arrested or barred from receiving essential services for using cannabis where it is legal. This proposal also would give state-compliant cannabis businesses unimpeded access to financial services.

The legislative proposal would remove marijuana from the list of controlled substances and begin regulating and taxing it. The bill would expunge federal non-violent marijuana crimes and allow individuals currently serving time in federal prison for non-violent marijuana crimes to petition a court for resentencing. It also would establish a fund to reinvest in communities that were harmed by the so-called War on Drugs.

I can confidently state that the federal prohibition of pot is doomed. Looking for ways to profit from the global mainstreaming of cannabis? If you haven’t already invested in marijuana, it’s time that you did.

The Investing Daily team continually scours the landscape for inherently solid marijuana plays. In fact, we’ve unearthed a hidden gem in cannabis pharmaceutical research. This trailblazing marijuana biotech is on the verge of becoming “The Pfizer of Pot.” Click here for details.