Last week the average retail price of gasoline in the U.S. reached $3.17 a gallon. That’s $1.02/gallon higher than a year ago, and the highest price since October 2014.

Many people have strong opinions on what is behind this surge in gasoline prices. Let me give you my opinion, as someone who has worked in the energy industry for 25 years.

Let’s look at the past 20 years of gasoline prices versus the price per barrel of West Texas Intermediate (WTI) crude oil. 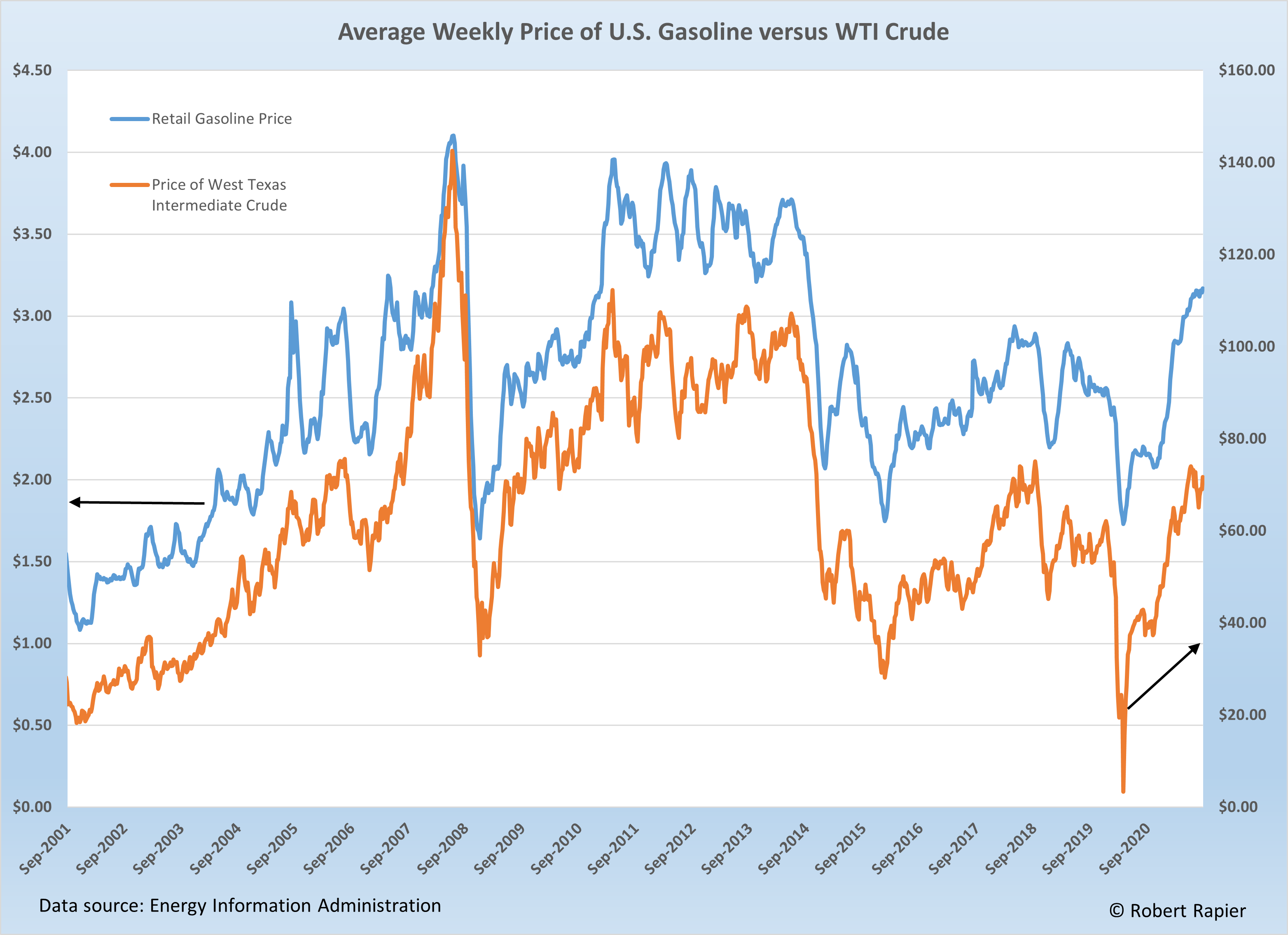 This graphic shows a high degree of correlation between the price of oil and the average retail price of gasoline. How high is this correlation? According to my Excel analysis, it’s a whopping 96.8% over the past 20 years. In other words, changes in gasoline prices are almost exclusively correlated with underlying changes in oil prices.

Exceptions can occur if there are short term refinery outages (which would tend to decrease oil prices and increase gasoline prices) and seasonal changes in gasoline (which can independently impact gasoline prices) but the bottom line is “If you want to understand what’s happening with gasoline prices, look to oil prices.”

So, What’s the Explanation?

People tell me with certainty every week that it’s President Biden’s policies that are driving up prices. My response is always that presidents can take precious few actions that impact gasoline prices in the short term.

Those few actions historically have been 1). Release oil from the Strategic Petroleum Reserve; 2). Increase gasoline taxes; or 3). Engage in a war in the Middle East.

President Biden did none of those, but he did take actions that were hostile to the oil and gas industry.

Then, Biden suspended new oil and gas leasing and drilling permits for federal land and water.

I am not defending President Biden’s energy policies. I had been critical of Biden’s energy decisions back in January. So, I fully understand how these decisions can impact oil and gasoline prices in the longer term — but not in mere months.

Note when oil and gasoline prices began to rise. That rise started in May 2020. Between the first week of May 2020 and the last week of December 2020, oil prices had tripled. Gasoline prices always follow.

Keep in mind that the entire world has experienced this. Gasoline prices have surged in every country with free market economies. Further, this price rise has taken place across most commodities. We have seen soaring lumber prices, base metals prices, cotton, oats, sugar — all primarily associated with the COVID-19 impacts on the economy.

The Oil Industry Is Thriving

One major irony is that if you are a supporter of the U.S. oil industry, you should cheer higher oil prices. Low oil prices in recent years drove many producers out of business.

This year, oil prices have risen, and so have the share prices of oil producers. For example, ConocoPhillips (NYSE: COP), the world’s largest independent publicly traded pure oil and gas company, has risen 64% year-to-date. Note that one of my 2021 energy predictions was that ConocoPhillips would return at least 30% this year.

Other oil companies have experienced similar gains. If you blame Biden’s policies on higher gasoline prices, do you credit him for the recovery in the oil industry? Of course not, because one isn’t related to the other.

Despite the sharp rise in the price of gasoline this year, it isn’t President Biden’s policies that are behind the moves. We understand why oil and gas prices have moved higher. However, in the longer term Biden’s policies thus far are likely to lead to higher future gasoline prices.

Editor’s Note: Maybe you’re looking for investments that are poised to prosper, regardless of economic variables beyond your control. Consider the advice of our colleague Jim Pearce.

As the chief investment strategist of our flagship publication Personal Finance, Jim has a knack for making trades that produce exponential gains, in bull or bear markets.