RFID: A Tech Megatrend in a Tiny Package

In the legendary sci-fi movie Fantastic Voyage (1966), a submarine crew is shrunken to microscopic size and injected into the bloodstream of an injured scientist to repair damage to his brain. When I first saw Fantastic Voyage as a kid, my imagination was set on fire.

But this technology is no longer the stuff of Hollywood fantasies. “Inner-space” devices are all around us…and maybe already inside you.

It’s called Radio Frequency Identification (RFID), which uses tiny transponders called “tags” to pinpoint and track objects. Each miniaturized tag, many weighing as little as a grain of rice (0.0725 ounces), sports an embedded antenna that transmits and receives radio waves from an RFID transceiver.

According to research firm Statista, the global market for RFID is on track to exceed USD 41 billion by 2025, up from about USD 10 billion in 2014 (see chart). 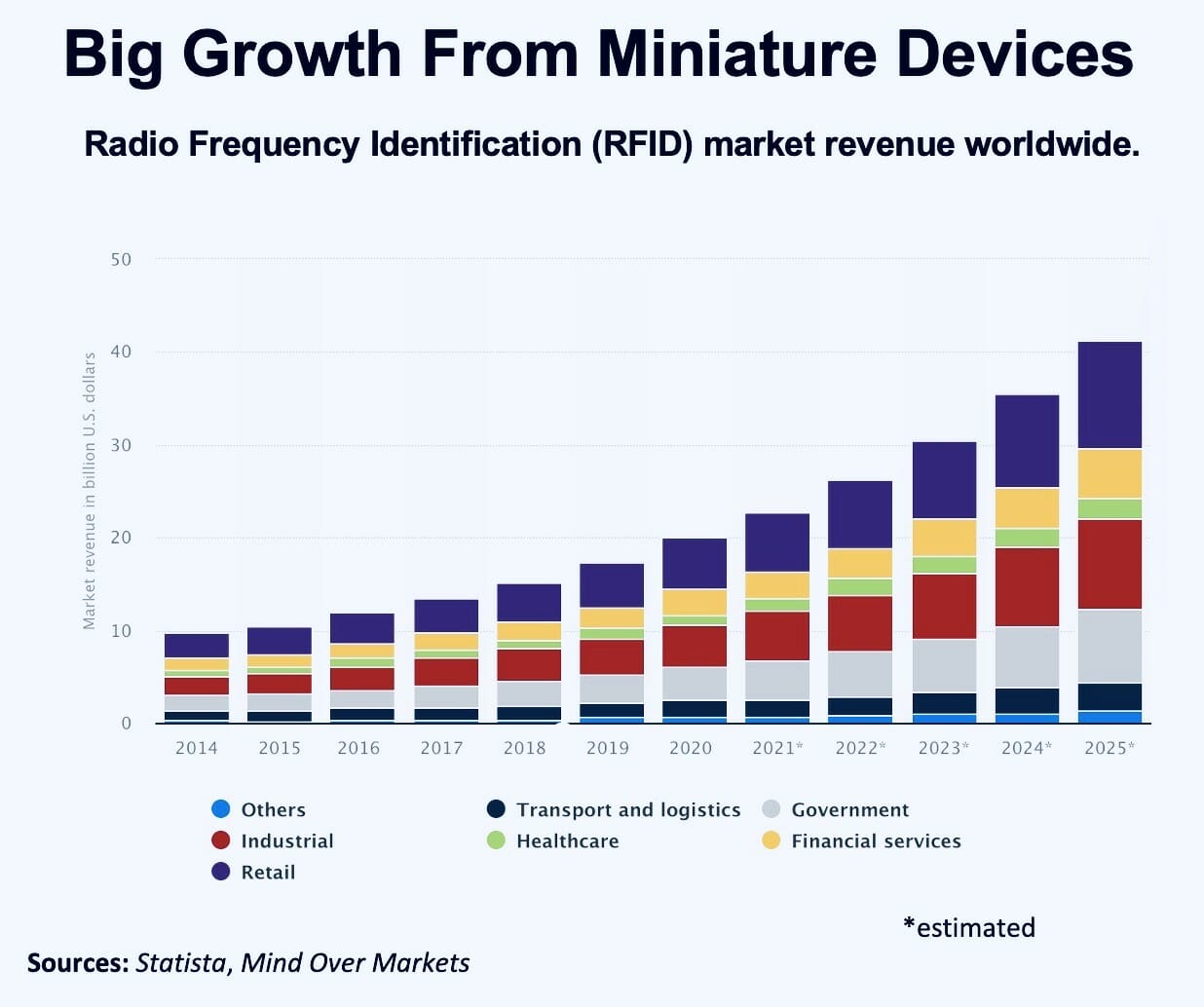 Below, I examine a well-positioned RFID investment play that offers both growth and downside protection. First, let’s explore the exciting ramifications of this disruptive technology.

Miniaturized, wireless tracking devices for medicine, retail, manufacturing, transportation, logistics, and a wide range of other uses represent one of the hottest investment trends you can find.

Doctors use RFID sub-dermal implants in patients to monitor their whereabouts, bio-functions and medical history. Hospitals, keen to meet efficiency standards, use RFID to trace bio-specimens, supplies and equipment. Pharmaceutical firms use RFID to track millions of proprietary drug compounds in their product libraries. Laboratories use RFID to track tissue or fluid samples.

RFID tags also are used in tollbooths, at the gas pump, in retail stores, on automaker factory floors, and on the farm inside livestock. In the aviation field, they’re used to track aircraft parts and passenger bags.

Many businesses, from retailers to hospitals to factories, must keep increasingly close tabs on their inventory just to survive. Notably, Amazon (NSDQ: AMZN) has set a new standard in tracking and delivery via RFID.

A “Fantastic Voyage” of profits…

Wireless tracking systems such as RFID are a multi-year investing bonanza, especially as they are integrated into the Internet of Things.

By the end of 2022, the installed base of web-enabled “things” is on pace to exceed 200 billion worldwide, including some 30 billion installed autonomous devices, largely driven by intelligent systems that will be collecting data across both enterprise and consumer applications, according to research firm IDC.

The growth stock winners of the future will be the companies with disruptive technology, offering software platforms that enable organizations to gain operational intelligence by sorting through all of this data.

Who says packaging companies are boring?

Those products may seem boring, but many companies couldn’t function without them. An old-line legacy company in the conventional packaging industry, Avery Dennison is a classic “reopening” cyclical play on the pandemic-era economic recovery.

Even if the economy slows this year due to inflation, higher interest rates, and the Russia-Ukraine war, customers will still clamor for the company’s products during this late cycle of the recovery.

Avery also has maintained its competitive edge by embracing the research and development of RFID. Avery foresaw the rapid growth of RFID applications long before anyone else and now dominates the field. With cash on hand of more than $141 million (most recent quarter), the company can continue its long-term growth strategy of acquiring small tech companies that are developing innovations in RFID technology.

The analyst consensus is for the company to rack up year-over-year earnings growth in the next quarter of 15.4%. The company should thrive in the post-COVID economy, when technologies such as RFID will be in even greater demand.

The stock’s 12-month forward price-to-earnings ratio is about 18. The analyst consensus has set a one-year price target for the stock of $218.27, which from current levels would represent an increase of about 23%.

The dividend yield is a decent 1.75%. In a volatile broader stock market, AVY is a reasonably priced “defensive growth” play, and a long-term bet on disruptive technology.

Editor’s Note: RFID isn’t the only tech megatrend that’s making early investors rich. Some of these technologies are still hidden away in laboratories, waiting to be unleashed on the world.

You need to get in on the ground floor of this game-changing opportunity, before the investment herd finds out and sends the share price soaring. Click here for details.