The Investment Road From Here

As a baseball fan, and as someone who enjoys malapropisms, I always find it amusing to quote New York Yankees legend Yogi Berra.

The late, great Yogi Berra once said: “When you come to the fork in the road, take it!”

That phrase aptly describes investor confusion in the pandemic era. Rather than a clear, straight path toward growth, the economy is taking many forks in the road that challenge your resolve.

Arguably the most disconcerting variable right now is inflation. As in the past, inflation’s path threatens to become all too apparent at the worst possible time, to wit: when it’s too late.

Given the mixed signals of the direction of the U.S. economy, here’s some guidance on how to navigate the unexpected twists and turns.

Are we headed for an extended period of high inflation? Or will inflation cool somewhat, proving that recent inflationary spikes are, as the Federal Reserve argues, transitory? Will COVID Delta slow the economic recovery, or trigger an outright recession whereby growth stalls for six months? Will we experience the dreaded phenomenon of stagflation, characterized by slow growth, high unemployment, and rising prices? These are the known unknowns.

Failing to develop an investment strategy to think through these questions would be tantamount to driving in the dark without the headlights on. But a strategy can be mapped out to shine light on these issues, because we’ve been down similar roads before.

One positive sign is that inflation has moderated slightly. The annual inflation rate for the U.S. is 5.3% for the 12 months ended August 2021, following two consecutive 5.4% increases, according to U.S. Labor Department data published September 14: 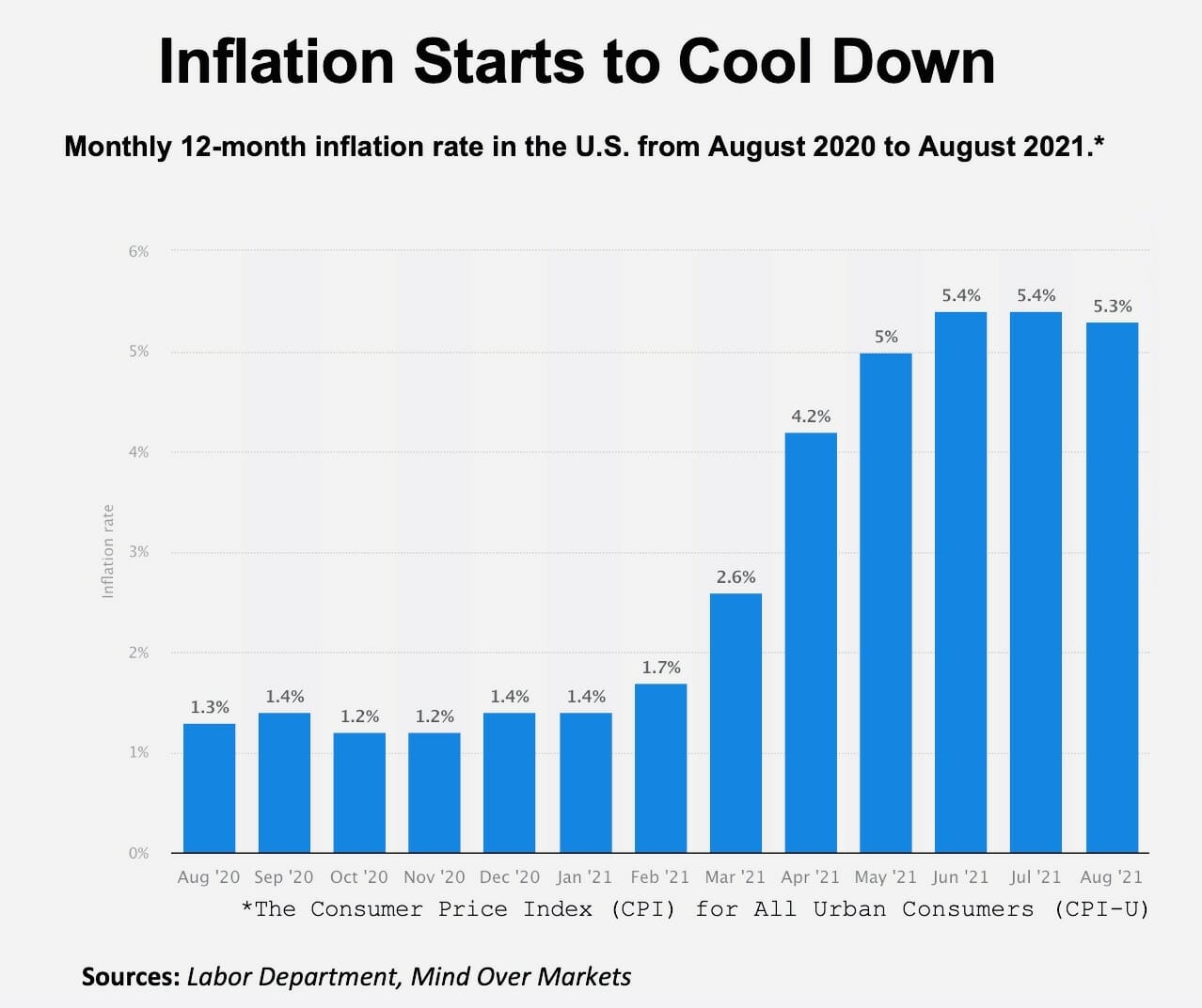 We know the direction of the economy and markets will be a question of growth: how much growth, how soon, and the timing of the Fed’s response.

Based on historical precedent, the Fed could withdraw its stimulus too late, after real growth has taken hold. In this scenario, the economy overheats and potentially suffers runaway inflation. Growth is largely a lagging indicator. By the time growth is at the level economists would want, it may already be too late for the Fed to dodge an inflationary bubble. Conversely, the Fed may withdraw its stimulus too early and derail the recovery.

Then there’s the possibility of stagflation, the beast that bedeviled the 1970s. That’s where the economy grows at a high enough rate (though still slow) to cause prices to rise and inflation to kick in, but not enough to bring down unemployment.

Higher inflation in the coming months is inevitable, due to the extraordinary amount of fiscal and monetary stimulus implemented to combat COVID-caused economic damage. Fed Chief Jerome Powell embraces the notion that inflation is necessary right now to bring down unemployment.

Of course, no one can truly know what lays ahead because there is no precedent in history for the magnitude of the Fed’s stimulus program, and thus it can’t be known how the U.S. economy will behave as a result.

Regardless, I don’t recommend trying to time the market for any of these scenarios. Timing is a fool’s game. But you can make proactive calibrations to your portfolio.

Watch This Video: Trading Strategies for a Turbulent Market

During periods of inflation, for example, you should look to companies with pricing power and internal efficiencies. They can better withstand commodity price increases that result from inflation. Companies that provide “essential services” fit the bill. These include health care, pharmaceuticals, consumer staples, and electric utilities.