Pot Legalization: The Writing Is On The Wall

Congress is currently embroiled in bitter partisan warfare over the debt ceiling, the infrastructure bill, the Afghanistan withdrawal, abortion, the January 6 riot, and an array of other contentious issues. I’ve been writing about politics for more than 40 years and I’ve never witnessed such overt hostility between Democrats and Republicans.

And yet, lawmakers on Capitol Hill this week found the time, and the political will, to tackle a bipartisan bill to federally legalize marijuana.

For decades, marijuana was a political football in America’s culture wars. Now, ironically, weed is one of the few issues on which a sharply divided electorate can join hands. Who woulda thunk it?

On Wednesday, the Marijuana Opportunity, Reinvestment and Expungement (MORE) Act took a significant procedural step forward. The MORE Act was taken up by the House Judiciary Committee, which is chaired by the bill’s sponsor, Rep. Jerrold Nadler (D-NY). As of this writing, Nadler is presiding over a full Committee markup of the bill.

This milestone comes one week after the House voted in favor of a Pentagon budget appropriations bill that includes an amendment that would shield banks that service state-legal marijuana businesses from being penalized by federal regulators.

Read This Story: Military Says “Yes” to Pot and Psychedelics

Among other things, the MORE Act would federally deschedule cannabis (i.e., lift the federal criminal ban) and expunge the records of those with previous marijuana convictions.

This tweet posted by Rep. Frank Pallone (D-NJ) is indicative of the consensus in Congress about marijuana and the MORE Act, especially among Democrats: 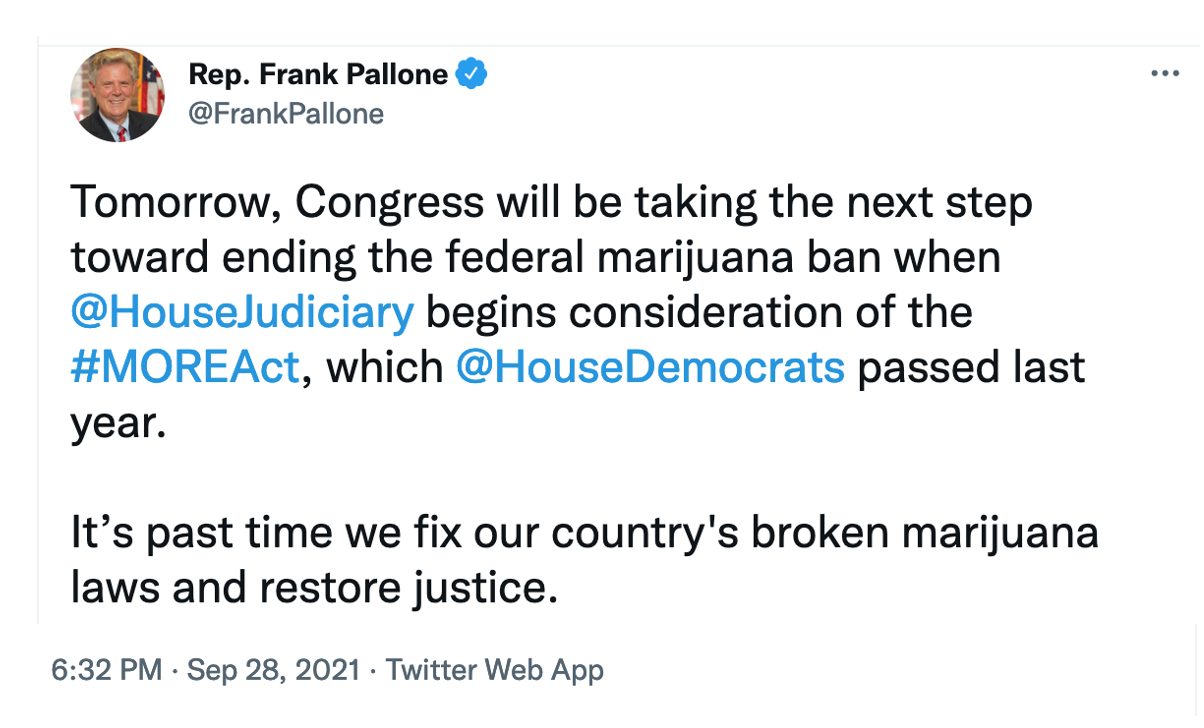 The MORE Act is comprehensive and seeks to accomplish the following:

Marijuana legalization seems to have regained its mojo on Capitol Hill, generating a tailwind for marijuana equities.

The inevitability of MORE…

MORE’s eventual enactment into law is a matter of when, not it. When it does become the law of the land, pot stocks are likely to surge.

Consider this: a decade ago, zero states allowed marijuana for recreational use. Now, 18 states and Washington, DC, have legalized recreational marijuana, whereas 36 states and four territories allow for the medical use of cannabis products.

In a nation sharply divided into red and blue states, the legalization of marijuana enjoys bipartisan support. Two-thirds of Americans currently favor legalization (83% of Democrats, 72% of Independents, and 48% of Republicans). The fact that nearly half of Republicans favor legalizing weed is remarkable, considering the socially conservative nature of the GOP these days.

In the 2020 general election, marijuana legalization appeared on the ballot in four deep red states: Alaska, Montana, North Dakota, and South Dakota. Legalization won in three of them, losing only in North Dakota.

The mainstreaming of marijuana can’t be stopped, but it won’t be a linear process. There will be ups and downs along the way. Every portfolio should contain marijuana stocks. However, investors need to tread wisely.

After painstaking research, we’ve pinpointed stable cannabis investments with the greatest profit potential. Click here for our report on the best pot stocks.

Questions or comments? Maybe you have a story idea, related to marijuana. Drop me a line: mailbag@investingdaily.com. To subscribe to my video channel, follow this link.