Fed Tapering: This Time Could Be Different

After closing below 1.3% on September 14, the yield on the 10-year Treasury note climbed above 1.5% less than two weeks later. That sent the stock market into a tizzy, pulling the NASDAQ Composite Index (IXIC) down nearly 5% over the same span.

Even after that drop, the IXIC has gained more than 14% this year and is up nearly 60% since the start of last year. And this isn’t the first time that the NASDAQ has had a drop of that magnitude over that span, as shown in the chart below. 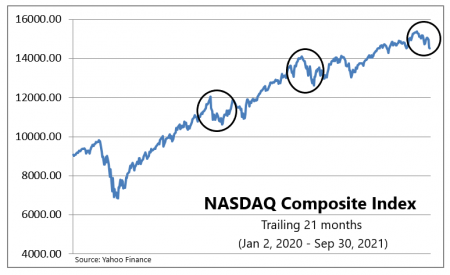 For those reasons, you might think that there is no reason to get worked up about a slight rise in interest rates. But this time could be different, given the change in monetary policy from the Federal Open Market Committee (FOMC) coming later this year.

For the first time since the onset of the coronavirus pandemic, the FOMC may begin tapering its monthly bond purchases soon. The timing isn’t exactly clear, but it could begin as early as this month as suggested in a statement issued by the FOMC on September 22:

Last December, the Committee indicated that it would continue to increase its holdings of Treasury securities by at least $80 billion per month and of agency mortgage‑backed securities by at least $40 billion per month until substantial further progress has been made toward its maximum employment and price stability goals. Since then, the economy has made progress toward these goals. If progress continues broadly as expected, the Committee judges that a moderation in the pace of asset purchases may soon be warranted.

It is that last sentence that has everyone excited.

Quite frankly, that news should have come as a surprise to no one. We’ve seen it coming for a while. But now that the day of reckoning has arrived, nobody is quite sure what to make of it.

I have heard several stock market analysts provide long-winded explanations of what it means using torturous logic to justify the threat higher interest rates pose to the economy. They talk about expected changes in consumer spending habits and narrower operating margins for manufacturers.

Quite frankly, I think they are grasping at straws. At this point, nobody really knows how tapering by the Fed may affect the economy. Bear in mind, the FOMC will still be a net buyer of bonds every month, just not quite so much.

Read This Story: The Investment Road From Here

But even if the overall economy is unaffected by higher interest rates brought about by tapering, momentum stocks will be worth less than they were when rates were lower.

That’s because many stock market analysts use a Discounted Cash Flow (DCF) formula for valuing momentum stocks. The higher interest rates soar, the more those future dollars must be discounted when equating them to present dollars.

That’s why tech stocks, of which the NASDAQ Composite primarily consists, are taking a bigger hit than the rest of the stock market. Most of them are valued based on cash flows projected many years into the future.

The further out in time a cash flow is discounted to the future, the bigger impact higher interest rates will have on its present value. For many tech stocks, the only way to justify their current values is to apply a very low discount rate to their future cash flows.

Of course, we all know that very low interest can’t last forever. Eventually, the economy heats up and interest rates rise as inflation drives up the cost of living. But as long as the growth rate of economic productivity outpaces inflation, the net result is greater wealth.

Fed Chair Jerome Powell believes that we are a long way from reaching the point that long-term inflation is growing faster than economic productivity. That is why he is willing to tolerate a higher rate of “transitory” inflation in exchange for faster job growth.

I agree with him on that. For that reason, I do not think that the stock market is at risk of crashing anytime soon. If I did, I’d tell you and everyone else to hide their money under the mattress right now.

However, I do believe that momentum stocks will grow at a slower pace over the next two years than they did over the past two years. And those that are only marginally profitable now may lose value if rates rise faster than expected.

For that reason, Wall Street analysts may abandon ship and discard their DCF models in favor of formulas that prioritize current results over future estimates. And when they do, they will most likely look at metrics such as a company’s return on equity and earnings growth rates to identify stock market winners.

Coincidentally, that is precisely the type of model I am using for my new trading service, Personal Finance PRO. I just published my first set of trades and I will be issuing another one this week. CLICK HERE if you want to see how it works.