As someone who grew up in New England, my favorite season is the fall. The leaves turn brilliant colors, it’s time to carve pumpkins with the kids, and there’s a poetic melancholy in the air. With any luck, my team the Red Sox make the playoffs.

But from an investment standpoint, autumn this year started with an uncomfortable chill. For the month of September, major U.S. equity benchmarks finished in negative territory.

September-October is historically the worst-performing period of the year for the stock market. Indeed, September 2021 was the S&P 500’s worst month since the nadir of the pandemic-induced market crash in March 2020. For equities across the board, the third quarter was for the most part negative as well (see the following table). 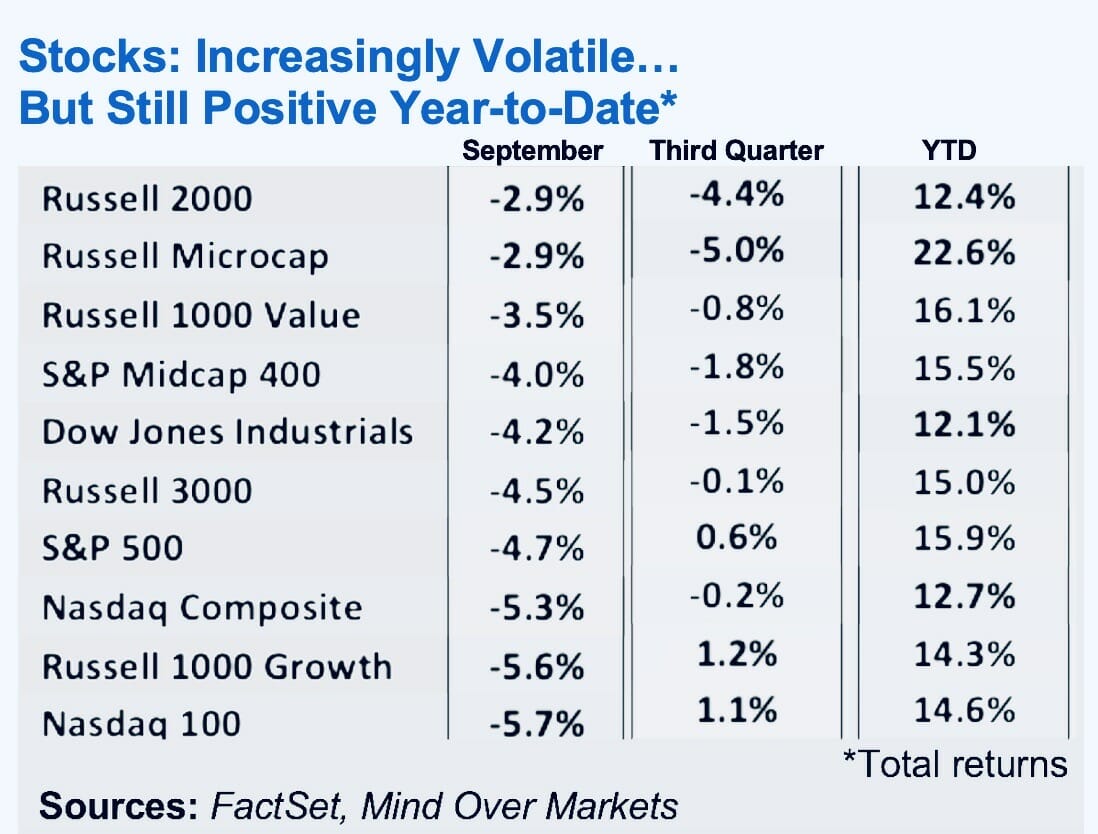 For the month of September, value stocks (-3.5%) outperformed growth stocks (-5.6%) by 2.1 percentage points. Most of value’s outperformance occurred in the final week following the September 22 meeting of the Fed’s policy-making Federal Open Market Committee (FOMC), which coincided with long interest rates climbing higher. When interest rates rise, growth stocks suffer because their future earnings are worth less.

The Bureau of Economic Analysis reported Friday that the Fed’s preferred gauge of inflation, the personal consumption expenditures price index (PCE), soared in August at the fastest pace in 30 years.

The PCE climbed 4.3% in the year through August, exceeding the previous month’s reading of 4.2%. Supply chain snafus were largely to blame.

Most economists view rising inflation and the Fed’s intention to taper its extraordinary stimulus as a positive sign that the economy is strengthening. But many investors aren’t so sure.

The value of any asset is its future cash flows discounted at the existing interest rate. Growth stocks (e.g., high-flying tech shares) have higher expected future earnings; when interest rates are falling, those future earnings are worth more (and the converse is true when rates are rising). By contrast, value stocks have more predictable current cash flows versus promised cash flows in the future.

A tailwind, though, is the corporate earnings picture. For Q3 2021, the projected year-over-year earnings per share (EPS) growth rate for the S&P 500 is 27.6%, according to research firm FactSet. If 27.6% turns out to be the actual growth rate for the quarter, it will mark the third-highest EPS growth rate reported by the index since 2010.

As interest rates rise, the FPER will probably trend lower. That doesn’t necessarily mean we face an imminent correction, but it enhances the importance of earnings growth as a driver of equity market returns.

Determining a meaningful valuation can be tricky. Many investment analysts use comparable company analyses, or “comps,” to value a company by comparing its valuation multiples to those of its peers. The basic idea is that companies with similar characteristics should trade at similar multiples, all other factors being equal.

But when valuations rise higher and higher, as we’ve seen year-to-date, this analysis ends up comparing one expensively priced equity to another, regardless of the fundamentals.

That’s where my colleague Jim Pearce comes in. Jim is the chief investment strategist of our flagship publication, Personal Finance. He has developed analytical tools that help him unearth the crucial data that the rest of the investment herd tends to miss.

Jim deploys these sophisticated methodologies in his new publication, Personal Finance Pro. Want to learn about his next profitable trades? Click here for details.