With each passing day, it’s getting harder and harder to write off significant year-over-year growth in U.S. fuel demand as a blip. Higher oil prices stoke inflation, which threatens to torpedo stocks. On the other hand, a bull market in oil helps lubricate the economy and equities market. Let’s make sense of the paradox.

Crude oil prices reached a seven-year high Tuesday, following Monday’s decision of the OPEC+ cartel to keep plans for easing production cuts unchanged, ignoring calls from the U.S. and other consuming nations for greater supply. Natural gas prices also are rising on worries about a shortage heading into winter.

Volatile energy prices have been whipsawing investors. Wall Street gets energized by energy’s comeback, only to get second thoughts as higher oil and gas prices dredge up inflation fears. This seesaw action is likely to continue for the rest of 2021, as the uncertain path of the pandemic roils the supply and demand equation.

Demand for oil is globally recovering from the COVID Delta outbreak faster than most analysts had expected. Soaring prices of natural gas and coal in Europe and Asia are driving an increase in gas-to-oil switching at power generating units around the world, further boosting demand for oil.

Wall Street is getting considerably more bullish about oil prices, especially in light of the surprisingly muted response of producers to the spike in demand. The consensus is that global oil demand could bounce back to pre-pandemic levels as early as the beginning of 2022.

In its latest oil demand report (for September 2021), the International Energy Agency (IEA) sees robust pent-up demand emerging in October and continuing through Q4 and into next year. The report noted that Hurricane Ida and other unexpected outages during August generated a decline in inventories for the first time in five months.

As the following chart shows, the prices of the U.S. benchmark West Texas Intermediate (WTI), and Brent North Sea crude (on which international oils are priced) have been on a tear: 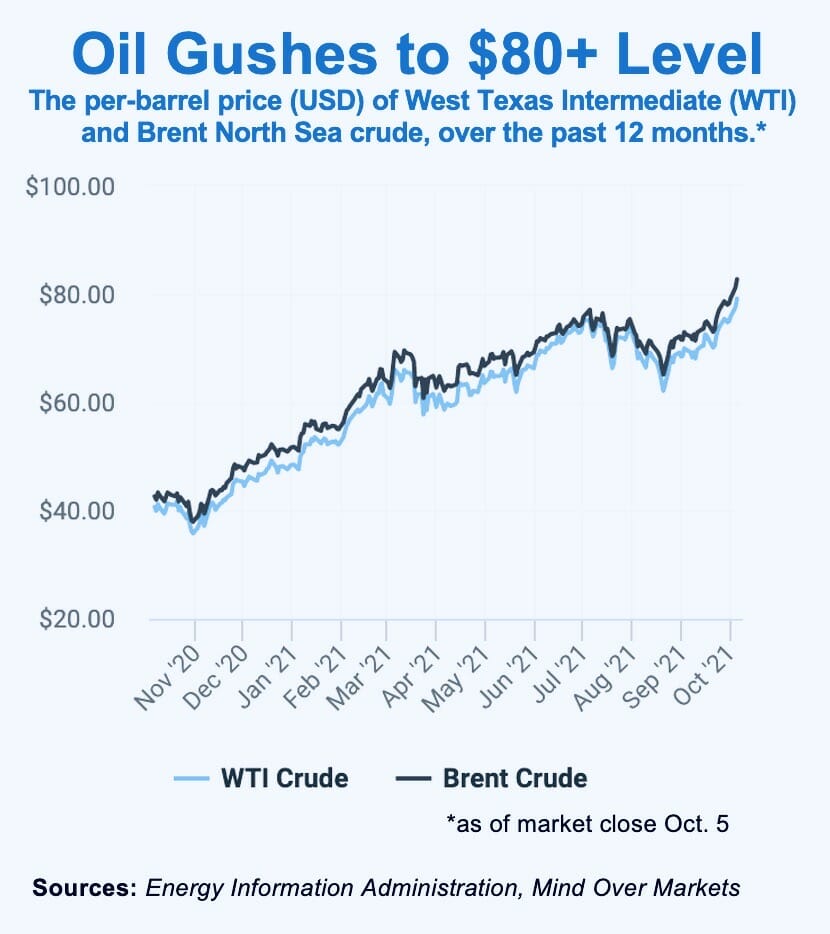 Despite soaring crude oil prices, U.S. shale producers have stuck to rigorous curbs on drilling, to emphasize shareholder returns rather than production growth. Accordingly, energy equities have been jumping.

The benchmark SPDR S&P Oil & Gas Exploration & Production ETF (XOP) has generated a year-to-date daily return of 38.2%, compared to 21.6% for the SPDR S&P 500 ETF Trust (SPY), as of market close October 5. A rebounding energy sector indicates a return to overall economic health. But higher oil prices are a double-edged sword, because they’re a major factor in rising inflation.

Propelling oil prices higher has been the resilient economic recovery, which in turn has been driven by Big Tech’s prosperity during the pandemic era.

Despite crosscurrents, which include Washington dysfunction and China debt woes, here’s the upshot: the economy’s growth trajectory remains on track.

This ain’t no disco…

Will rising oil and gas prices trigger damaging inflation and choke off the recovery? Despite what you might be hearing on the cable TV gabfests, I don’t think so.

I’m old enough to have personally experienced the recession of 1973-1975. The Seventies era was demoralizing on many levels, especially economically (and sartorially). Rising oil prices back then were a scourge that paved the way for “stagflation,” but they occurred during a period of pitiful economic growth, declining productivity, high taxes, and runaway price inflation.

The economic context is different today. Since the Middle East oil shocks of the 1970s, we’ve become less dependent on foreign oil and the economy is far more globalized. A globalized workforce keeps downward pressure on prices.

Some pundits are blaming the Biden administration’s energy policies for soaring gasoline prices, but frankly, that’s erroneous. The fact is, decisions by the executive branch to shutdown the Keystone XL pipeline and encourage green energy are not sufficient to significantly drive up prices at the pump, especially since gasoline prices are rising on a global level.

Whether a Republican or Democrat occupies the White House, there’s little that any president can do to seriously affect gasoline prices (other than start a war, hike gasoline taxes, tap strategic stockpiles, or jawbone the Saudis). The cause for high gasoline prices right now largely stems from pandemic-induced supply and demand imbalances, exacerbated by extreme summer weather events.

During the worst of the pandemic, we witnessed chronic under-investment in energy production because of lockdowns. Now that the economy is rapidly opening up, there’s a shortfall of supply.

It’s true, if oil prices get too high, they raise household and corporate costs and ignite inflation. But if they get too low, as they did during the worst of the pandemic-induced crisis in 2020, they indicate lack of economic activity and scores of jobs are lost in the energy sector and its ancillary segments.

In the context of the negative oil prices we experienced in April 2020, the recent rapid rise in crude oil prices can be viewed as a return to economic health and, eventually, a semblance of energy sector equilibrium.

Seeking the next catalyst…

Looking for the next catalyst for growth? An analyst with an uncanny knack for pinpointing profit catalysts before they happen is my colleague, Jim Pearce.

Jim deploys sophisticated methodologies in his new publication, Personal Finance Pro. To learn more about his next profitable trades, click here for details.