GM Makes Its Move on Tesla

A few weeks ago, I explained why rising interest rates are bad for momentum stocks. Long story short, future profits must be discounted at a steeper rate.

I used ARK Innovation ETF (ARKK) as an example of an investment, in this case an exchange-traded fund, that is especially vulnerable to higher interest rates. The ETF’s manager, Cathie Wood, has a strong preference for cutting-edge tech stocks. But now Wood has a much bigger problem than rising rates.

Her fund’s biggest position is Tesla (NSDQ: TSLA). To her credit, Wood opened her position in Tesla in 2018 when the stock was trading around $75 (adjusted for last year’s 5 for 1 split). She predicted then that Tesla would reach $800 (split-adjusted) within five years.

That prognostication proved true at the start of this year. On January 7, TSLA traded above $800 for the first time ever. Less than three weeks later it topped $900.

Since then, TSLA has not traded above $900 again. It closed last week below $800, only slightly above where it started the year.

Don’t fret for Tesla’s longtime shareholders such as Cathie Woods. Over the past two years, TSLA has appreciated more than 1,500%.

Over the same span, “Big Three” automaker General Motors (NYSE: GM) is up 78%. That level of stock market performance would look impressive if not for Tesla’s gigantic return.

On a short-term basis, it isn’t even close. So far this year, GM is up nearly 41% while TSLA has gained a little over11%. 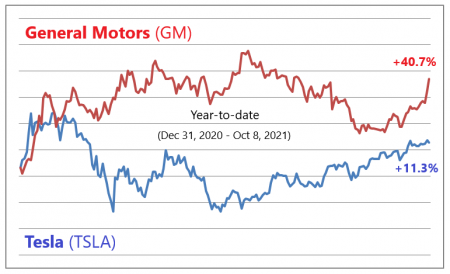 Despite Tesla’s recent underperformance, Woods remains undaunted about the company’s long-term growth prospects. As she has said many times, innovation is what separates Tesla from all other automakers.

That was certainly true three years ago when Woods first started buying shares of Tesla. At that time, the electric vehicle (EV) market was regarded as too small to matter.

True, some of the other carmakers such as Toyota Motor (NYSE: TM) were producing hybrid vehicles. However, none of them were moving aggressively into the EV market at that time. As a result, Tesla gained a significant “first mover” advantage in that space.

At this point, most of that early advantage is gone. Over the past three years, nearly every major automaker has announced plans to aggressively ramp up EV production.

And perhaps none more so than General Motors, which still has substantial financial resources despite its history of financial woes. To give you a sense of scale, consider last year’s financial performance compared to Tesla.

Read This Story: Baby You Can Drive This Stock

On the one hand, it is impressive that Tesla is already one-tenth the size of GM despite its relatively short existence. On the other hand, it may not be able to grow fast enough to fend off the industry giants.

Last week, General Motors CEO Mary Barra said that the company will double its EV manufacturing capacity by the end of this decade. To accomplish that, GM will convert several of its assembly plants to EV production.

Getting a Move On

Tesla does not have the luxury of converting existing facilities to ramp up production. It has to build them from the ground up, which takes a lot of time and money.

That is partly why Tesla CEO Elon Musk announced at the company’s annual shareholder meeting on October 7 that the company is moving its headquarters from California to Texas. He specifically cited difficulty in scaling operations in the San Francisco area as one reason for the move.

Musk emphasized that the company would not only retain a presence in California but would expand its Fremont factory capacity by 50%. But any new factories will be built in Texas where land and labor are considerably cheaper.

After years of mocking his larger competitors via social media, Musk apparently realizes that he can’t play around anymore. It isn’t just GM breathing down his neck; Ford (NYSE: F), Volkswagen (OTC: VWAGY), and several other automakers are going all-in on EVs, too.

The tables have turned. Tesla is the prey while GM, Ford, and Volkswagen are the hunters. The innovative technology that Musk has been championing is quickly becoming the industry standard.

For the time being, Wood insists that Tesla is still a force to be reckoned with. She recently predicted that TSLA would hit $3,000 a share by 2025.

But if she really believes that, it is odd that she has been a net seller of Tesla stock this year. Last month, her fund management company sold $270 million of TSLA in a single day.

Perhaps Wood intends to buy TSLA back the next time its share price takes a dive. But if she really wants to put her money in the next big EV stock, perhaps she should set her sights elsewhere.

Our investment team prefers to think outside the box. Our favorite play on EVs is lithium. That’s right, lithium.

A silver-white metal, lithium is among a slew of commodities that are poised for huge price gains as demand for commodities explodes.

Lithium is crucial for a variety of industrial applications. The biggest growth driver for lithium is the demand for lithium-ion batteries used in EVs. Lithium is the ultimate pick-and-shovel play, because no EV maker can do without it. For details about America’s number one lithium investment, click here now.