I’m old enough to remember Walter Cronkite’s coverage in the 1970s of long gasoline lines in the United States, juxtaposed with sinister images of Middle Eastern leaders in keffiyehs and turbans. I drove my dad’s gas-guzzling Chevy Bel Air at the time and it took my entire allowance to keep the tank filled.

Those were the oil shocks of 1973-1974 and 1979. The former was triggered by OPEC’s oil embargo against nations that supported Israel and the Yom Kippur war. The latter was caused by a drop in oil production in the wake of the Iranian revolution.

Do we face a new energy shock, akin to those of the 1970s? The short answer is, no. Perhaps on social media and cable television you’re witnessing alarmist comparisons between that dismal economic era and today. The comparisons are specious. Below, I explain why and provide advice on how to trade in the context of current volatility in the energy patch.

But keep in mind, the coronavirus pandemic was a “black swan” event that crushed the economy and energy demand. In early 2020, the world economy suffered the worst downturn since the Great Depression. Now, the economy is recovering faster than expected, and under-investment in energy production due to pandemic-induced demand destruction is coming back to haunt us. But these supply shortages, distribution bottlenecks, and infrastructure snafus will eventually get sorted out.

What’s more, based on the difference between what OPEC+ is capable of producing and what it’s actually producing right now under production curbs, the cartel has lots of elbow room to boost output to ease supply shortages if they persist.

Can the economic recovery withstand current fossil fuel price spikes? More than likely. The economy relies on a much more diverse mix of energy than it did in, say, the 1970s when renewables comprised a far smaller portion of the energy mix. The U.S. back then also was considerably more reliant on foreign crude oil imports.

Current energy price disruptions are likely transitory, due to the extraordinary nature of the pandemic. Fossil fuels are still the world’s dominant energy source, but once we’re on the other side of COVID, the long-term momentum of green energy will again become apparent.

U.S and international stock markets have been on a roller coaster in recent days, following a dismal performance in September. As the holiday-shortened week unfolds and third-quarter 2021 corporate earnings start to roll in, investor moods are likely to brighten. Earnings projections are robust, especially for the bellwether financials.

Another tailwind is the deal cobbled together last week in the Senate to raise the debt ceiling until December, averting a default. The House is expected to give final approval to the bill on Tuesday. Whenever Republicans and Democrats agree on anything, Wall Street regards it as a festivus miracle.

Crude oil prices hover at a seven-year high and natural gas prices have doubled this year. Even coal has climbed to record highs.

The long-running narrative has been that fossil fuels are antiquated and doomed, but you’d never know it from their stunning price appreciation so far this year (see chart). 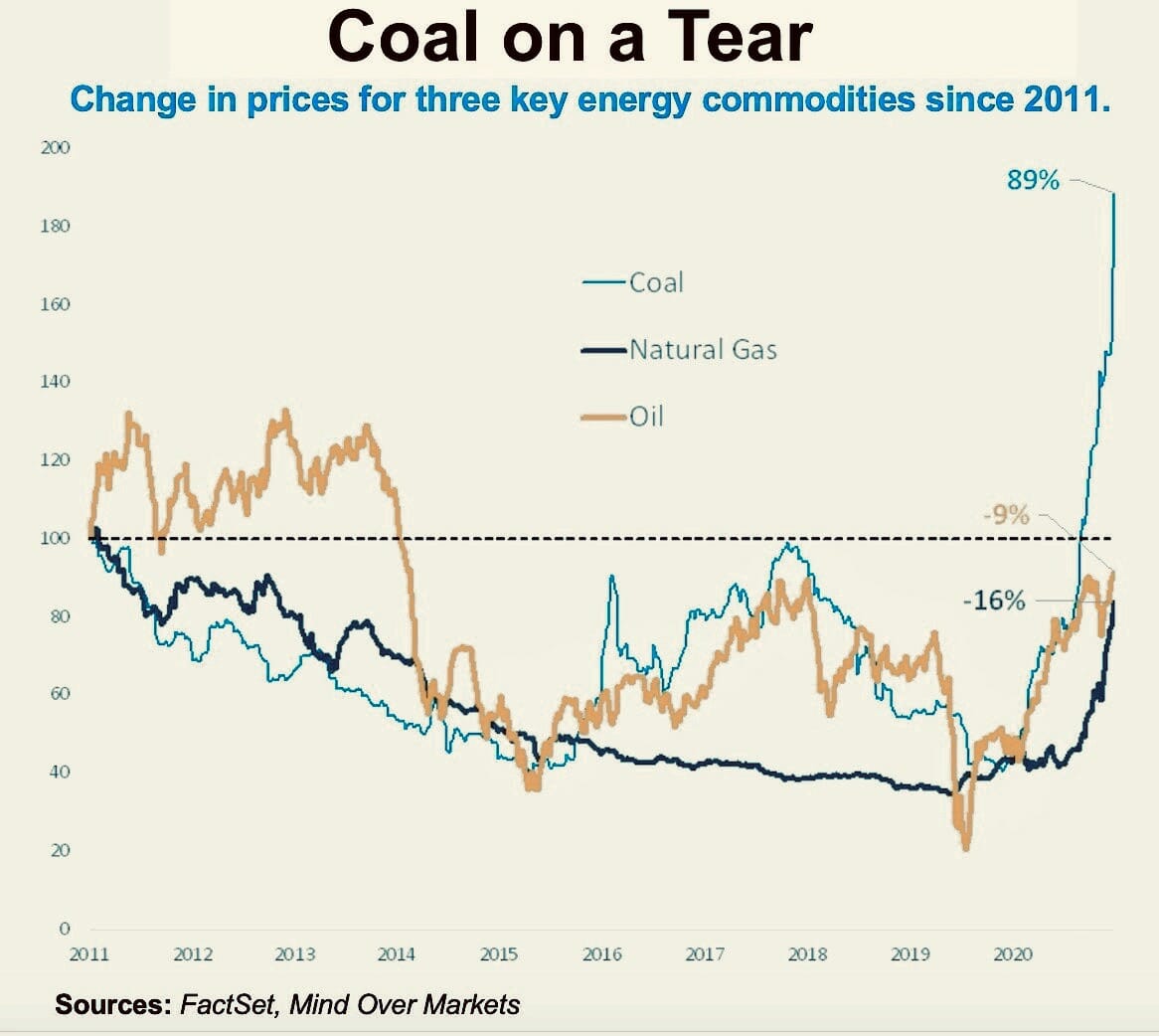 On a positive note for energy and commodities investors, the supply squeeze and resulting oil, gas and coal price inflation have lifted the share prices of the big integrated energy names, commodity miners, and exploration and production companies. More about that in a minute.

The global energy shortage has prompted a resurrection of the pariah of commodities, i.e. coal. Coal is a particularly dirty means of producing power. In terms of emissions, coal is the most carbon intensive. Governments around the world are intent on phasing out coal, to combat climate change.

However, as crude oil and natural gas become scarce, countries such as China are scrambling to keep factories humming and the lights on. Hence the latest reliance on coal. This unexpected trend seemingly contradicts the conventional wisdom that coal is dead in our “green” era.

You might be surprised to learn that coal still commands a more than 35% share in global power generation. Does this mean the transition toward renewables is starting to reverse direction? Not at all.

Pundits who glibly blame current energy turmoil on eco-friendly political policies are ignoring the underlying factor at work behind soaring fossil fuel prices, to wit: global supply and demand imbalances caused by the deadly pandemic. Once COVID fades (and it’s already starting to plateau), these imbalances will get sorted out and the temporary energy crunch will ease, at which point world governments will again ramp up their concerted efforts to reduce reliance on fossil fuels (especially coal) and emphasize solar, wind, and other renewables.

For investors, the spike in raw materials costs makes cyclical and commodities plays more appealing. In 2022, as the global economic recovery gains speed and infrastructure spending explodes, raw materials miners will richly benefit from the “super-cycle” in commodities. The most promising raw materials are those crucial for green technologies.