Let’s put aside the daily ups-and-downs of the financial markets to focus on an overarching investment theme: the big money available in what President Dwight Eisenhower famously called “the military-industrial complex.”

If you’re looking for a source of profits that enjoys multi-year momentum, the aerospace/defense sector fits the bill. Pentagon suppliers get a steady stream of contracts, courtesy of taxpayers, regardless of economic cycles, the movement of inflation and interest rates, the political party in power, or monetary policy. Federal Reserve tapering? Defense contractors shrug indifferently.

Uncertainties caused by geopolitical conflict or deadly pandemics only prompt governments to increase defense budgets. Aerospace/defense is not only a growth proposition, it’s also a hedge against inflation and risk.

This week, the nation’s warfighters put their leading-edge technology on display, and therein lay insights and opportunities for investors.

The Association of the United States Army (AUSA) has been holding its annual conference this week, October 11-13, in Washington, DC. Earlier in my career, when I covered aerospace/defense, my attendance at AUSA as a reporter was considered mandatory by my employers at the time.

Although I no longer attend, my contacts in the defense industry keep me posted every year about the latest trends unfolding at this exclusive and tightly guarded show. In recent days, I’ve been getting phone calls, emails and texts from these colleagues in attendance.

Why should an investor care about AUSA? The confab every year attracts 33,000+ attendees, representing a global array of civilian and military leaders, lobbyists, aerospace/defense executives, Silicon Valley technologists, enlisted personnel, analysts…and yes, investors. It’s from insider gatherings like these that I often get my best investment ideas.

You’ve probably never heard of AUSA. You never see it covered in the mainstream media or on channels such as CNBC, that’s for sure. (Bad for ratings!) But for investors looking for the next big money-making theme, AUSA’s stealthiness is a good thing. Following the well-trod path of the investment herd is not the best way to make money. Tapping into nascent megatrends before the herd catches on…that’s how individual investors get rich.

Military budgets around the world are enormous and only getting bigger. The U.S. spends far more on defense than any other nation on earth. This largesse (which mostly ends up in the coffers of U.S.-based contractors) will continue far into the foreseeable future. The following chart tells the story, from the perspective of the NATO alliance: 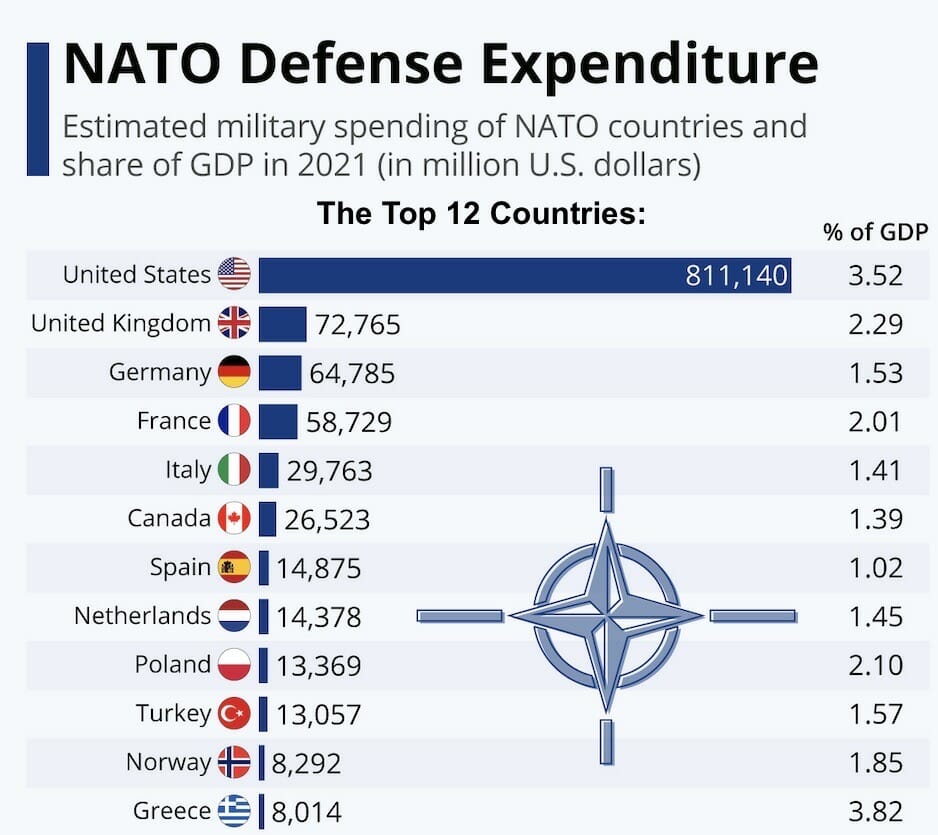 Here are the top military-related themes that are emerging at AUSA this week. Each theme has profound ramifications for civilian investors:

Drones already stand in the forefront of military technology and now they’re also getting paired with manned military combat jets and helicopters, to create operational synergies. These efforts are accelerating the development of advanced sensors, which are vital to commercial drones.

Increasing numbers of federal organizations such as the U.S. Coast Guard, Forestry Service and Border Patrol, as well as local police departments, are adopting drones for airborne surveillance and monitoring. Drone makers that serve both military and civilian customers are in the best position to profit.

Military avionics is booming, as war strategists impose increasingly complex and demanding missions on the pilots of fixed-wing aircraft and helicopters.

The dust and heat of operational conditions in foreign battlefields, such as in the Middle East, are additional factors. These avionics also must be designed to cope with exposure to ocean saltwater spray.

When the Cold War ended, military-developed technologies that were once classified, in particular the Global Positioning System (GPS), where declassified and changed commercial and consumer lives forever.

Remember the “cloaking device” of the Klingon Bird of Prey starship in the Star Trek franchise? Hollywood has a way of anticipating the future.

Adaptive camouflage is under development that can mask a military vehicle’s infrared signature and shield it from detection, by enabling it to blend in with its surroundings. This technology makes thermal imaging systems obsolete.

Some cloaking systems work by covering a vehicle with panels that are rapidly heated or cooled to match the temperature of the vehicle’s surroundings. The commercial possibilities are vast.

The military is currently making multi-billion-dollar investments in developing and testing self-moving vehicles, for battlefield use. Tanks, jeeps, armored personnel carriers…soon, they’ll all be driving themselves.

Watch This Video: Baby, You Can Drive This Stock

Which brings me to consumer electronics giant Apple (NSDQ: AAPL). Apple has tremendous amounts of capital to invest in disruptive technology. One standout project is the Apple Car.

There’s often cross-fertilization between the civilian and military sectors. (Think GPS.) You don’t read much about it, but Pentagon demand is a tailwind for autonomous vehicle expansion in the consumer world.

Considering Apple’s track record for high quality, if the company is able to develop a self-driving vehicle, it’s a safe bet that it’ll be a game-changing, state-of-the-art product that dominates the field.

But your greatest opportunity to make money from the Apple Car isn’t buying Apple stock itself. Make one shockingly simple move today and you’ll lock in your shot at a huge payday when Apple drops its bombshell news about the Apple Car. For details, visit this link.

John Persinos is the editorial director of Investing Daily. John also serves as an analyst with the aerospace/defense consulting firm, Teal Group. Send your correspondence to: mailbag@investingdaily.com