Just How Bad Is The Supply Chain Mess?

The ancient Chinese philosopher and military strategist Sun Tzu wrote: “The line between disorder and order lies in logistics.” You could make the same statement about the economy and financial markets today. Many of our investment threats right now boil down to logistics.

Despite uneven rates of vaccination, COVID is starting to plateau around the world. However, supply chain bottlenecks and shortages persist. The havoc wreaked by the pandemic on distribution and infrastructure networks, as well as on supply and demand, won’t quickly or easily go away.

Stocks closed mostly in the green Wednesday, after the release of minutes from the Federal Reserve’s last meeting showed that tapering is likely to begin by year end. The Fed is growing more hawkish because of rising inflation, but the flip side to that equation is robust economic growth.

In pre-market futures contracts Thursday, all four indices were poised to open higher, as cyclical plays regained traction. The thriving equity markets this year have turned the bears into the dumb money. That said, risks are mounting and they shouldn’t be ignored.

As Aretha Franklin sang in Chain of Fools: “every chain has got a weak link.”

Supply chain disruptions are especially acute for U.S. and European companies that heavily rely on inputs from China and its neighbors. The explosive growth of outsourcing, particularly to Asia, is part of the problem.

Another factor exacerbating supply chain problems in the U.S. and Europe is the trend towards procuring larger, prefabricated units made in remote locations, rather than smaller assemblies and parts that are made domestically.

Components of the International Monetary Fund (IMF) Purchasing Managers’ Index show how supply chain bottlenecks have emerged during the pandemic, surging in February-March 2020 and re-emerging throughout 2021 as economic recovery stokes demand.

However, in countries that supply raw materials (and which got an early grip on the pandemic), supply chains were less harmed.

Clobbered by shutdowns and the loss of workers stemming from pandemic-induced strictures, many suppliers last year restricted production. We’re now suffering the consequences.

As the IMF notes in its report for October 2021, the combination of supply chain snafus and rising commodities prices is fueling consumer price inflation. The IMF seems to agree with the Federal Reserve that these inflationary spikes are transitory. The IMF’s report predicts that global inflation will peak at the end of this year and retreat to pre-pandemic levels in most countries by the middle of next year.

See the following chart, released on October 13 by the research firm Statista. The IMF calculates the index by applying the difference between delivery time and production indices of the PMI. The higher the value, the worse the disturbances in global supply chains: 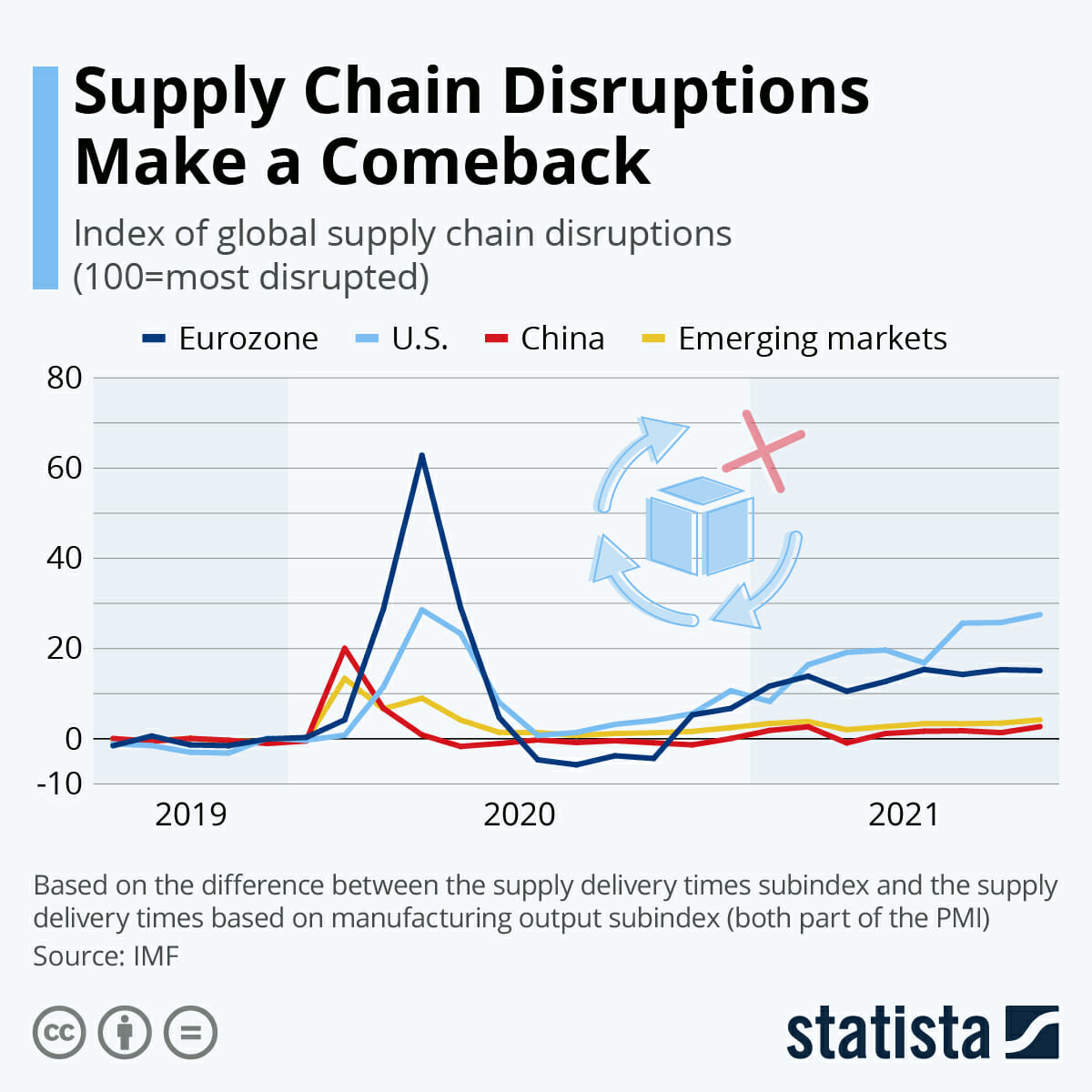 The trickiest situations involve regulated industries, such as pharmaceuticals or aerospace. In those circumstances, replacing a struggling supplier is especially difficult, because companies must go through a lengthy government approval process to get a replacement supplier up and running.

These conditions are ripe for rising prices. The U.S. Labor Department reported Wednesday that the consumer price index (CPI) overall climbed 0.4% in September (versus the 0.3% consensus estimate), driving the year-over-year gain to 5.4%. Excluding food and energy, the gain was only 0.2% and 4%, respectively.

As I’ve pointed out in recent columns, the major source of inflation and rising energy prices stems from supply chain problems that will eventually abate. Many economists predict that supply chains won’t be a problem next year.

Current worries, though, have impeded the momentum that drove stocks to record highs over the summer. In September, the S&P 500 fell 4.8%, its sharpest drop since the pandemic’s outbreak in early 2020. Still, the major indices have recorded healthy gains year to date.

The upshot: The economy is improving and the bull market is intact. But as lingering supply chain problems show, we’re not out of the woods…yet. You need portfolio insurance, especially against inflation. Even if inflation doesn’t reach extreme levels, it’s nonetheless rising.

A proven source of investment safety is gold. The rule of thumb is for a portfolio allocation of 5%-10% in either gold mining stocks, exchange-traded funds (ETFs), or the physical bullion itself. I prefer gold miners, which offer exponential gains because of corporate operating leverage. For details about our favorite gold mining stock, click here.