The Bears Keep Getting it Wrong

“I beseech you, in the bowels of Christ, think it possible that you may be mistaken.”

That was the warning given by Oliver Cromwell, leader of the armies of Parliament, to monarchists during the 17th century civil war in England.

The royalists were indeed mistaken. Cromwell defeated the forces of King Charles I, abolished the monarchy, and took charge of the country. As for Charles…well, he was beheaded.

Today, modern economists adhere to what they call “Cromwell’s Rule,” which stipulates that you should never assign 100% certainty to anything, no matter how likely or unlikely, unless it is a logically true (2+2 = 4) or false (2+2 = 5) statement.

As an investor, if you’re ever 100% sure of anything, I beseech you, think it possible that you may be mistaken.

In this era of sound bites and memes, many pundits adopt a pose of aggressive certitude. It’s a way to stand out. For example, all year we’ve been hearing from the bears that a stock market crash is inevitable.

And yet, as the fourth quarter unfolds, the bulls are still firmly in charge. When the market closed last Friday, the S&P 500 had posted its best week since July (see table). 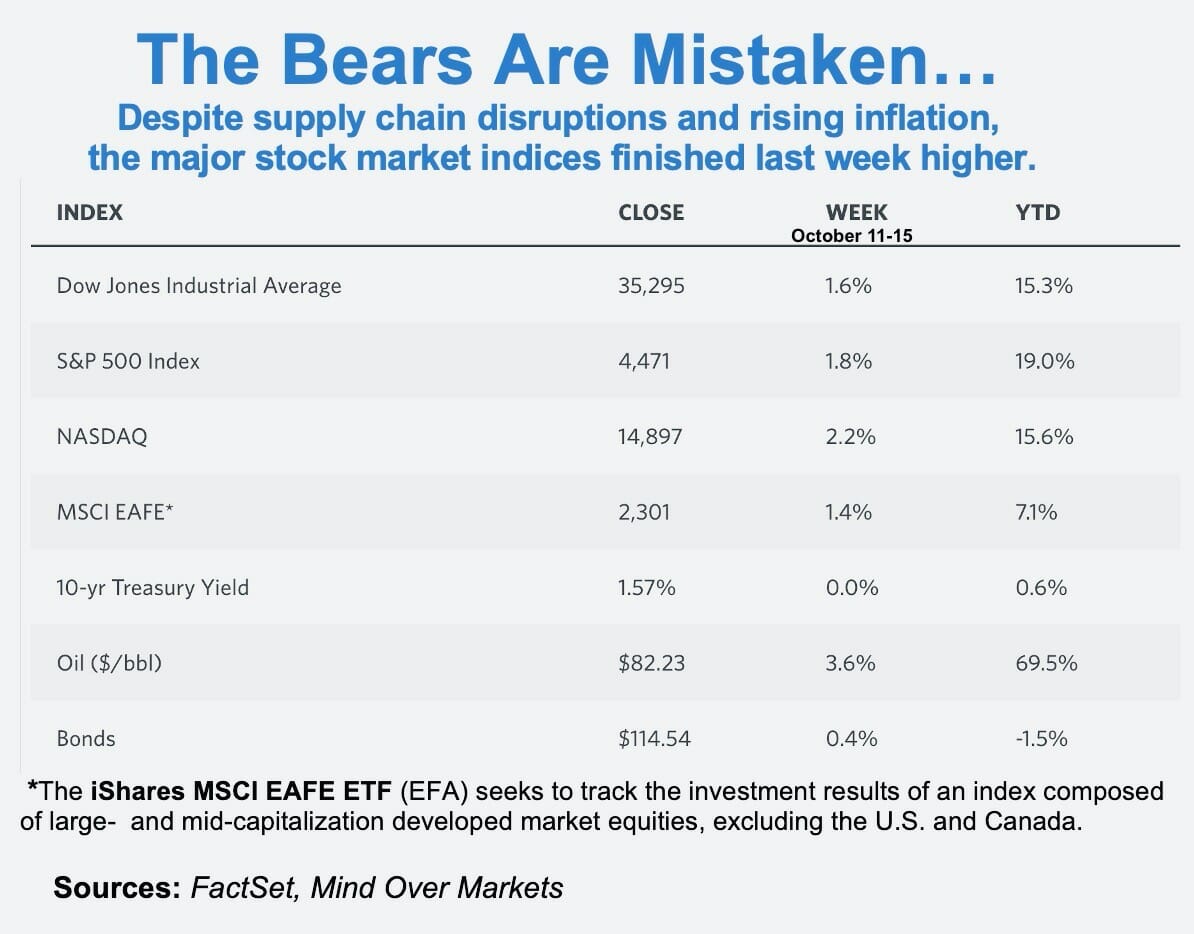 The major U.S. indices soared Friday, with the Dow Jones Industrial Average climbing nearly 1,000 points in the single trading day, on a better-than-expected start to Q3 earnings season. Another busy week of earnings releases lays ahead.

To be sure, autumn has been volatile. Last month generated the first 5% pullback of 2021. Supply chain woes and concomitant inflation have spooked investors. But the S&P 500 has returned to within 2% of its all-time high, as investors buy on the dips.

Watch This Video: Why The Bull Case Remains Intact

Sales were up 0.7% from the previous month, despite the consensus estimate that they would decline 0.2%. The termination of enhanced unemployment benefits has not dampened the mood to shop (see chart). 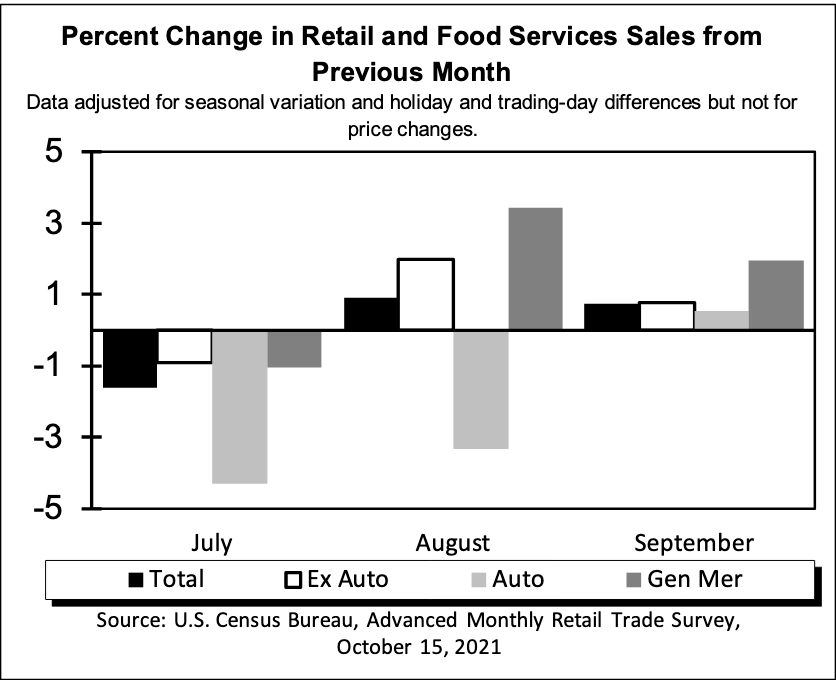 Here are the bullish factors, as I see them:

Global economic growth is healthy; the pandemic is plateauing; vaccination rates are picking up; Q3 corporate profits are crushing expectations and Q4 is projected to come in strong as well; jobs growth is accelerating; American households are sitting on more than $2 trillion in accumulated savings; and the holiday shopping season is about to start. Add them all together, and the stock market’s momentum is likely to continue for the rest of the year.

Of course, we also face risks. “Hot” inflation might turn out to be long-lasting and not transitory; supply chain disruptions might wreak havoc well into next year; Federal Reserve tapering might topple high equity valuations; and COVID Delta might stage a deadly resurgence. It’s prudent to hedge your portfolio against downside risks, especially inflation.

The raw materials of wealth…

As the global economic expansion accelerates throughout Q4 and into 2022, we’re witnessing the emergence of a “super cycle” for commodities.

Increasing your exposure to raw materials is a way to simultaneously tap growth and insulate against inflation. One of the world’s most vital commodities is copper.