Will The Fed Miss The Mark?

Central banks have a poor record on timing stimulus to prevent runaway inflation. Typically, by the time they move to raise interest rates to cool an overheating economy, it’s too late to head big inflation off at the pass.

To support its twin mandate of price stability and maximum employment, the Federal Reserve must know precisely the state of inflation and unemployment to direct effective monetary policy. Problem is, the coronavirus pandemic has generated a lot of contradictory economic data.

It’s undeniable that the Fed’s massive bond buying program has fueled higher prices of financial assets. Hence the obsession over when and how the Fed will start to taper.

According to a new Deutsche Bank (NYSE: DB) survey released October 18, a significant portion of investors expect the U.S. Federal Reserve and the European Central Bank to keep monetary policy too loose for too long.

In a survey of more than 600 investment professionals worldwide, conducted by Deutsche Bank between Oct. 6-8, 42% expected the Fed to stay slightly too dovish, while 24% anticipated that the central bank would get policy “about right” and 33% foresaw a hawkish bias.

As you wade through today’s raging academic and political debates about the true threat of inflation, what conclusions can you draw as an investor? Let’s take a closer look at monetary policy and its effects on investing.

The Fed giveth, and taketh…

Tapering is the reduction of the rate at which the Fed accumulates new assets on its balance sheet under a policy of quantitative easing (QE). Tapering is the first step in the process of winding down an existing monetary stimulus program.

The Fed’s purchases under QE reduces the available supply of bonds on the open market, resulting in higher prices and lower yields. Lower yields (i.e., lower long-term interest rates) reduce the cost of borrowing, which stimulates the economy. QE policies lower the interest rate, so when the purchasing program is reduced, interest rates rise again.

Among investors, worries about Fed tapering have been alloyed with optimism over economic growth.

In pre-market futures trading Tuesday, all four U.S. indices were poised to open in the green. The equities rally should get fresh impetus this week, as third-quarter earnings come rolling in. Expectations for corporate profits are high.

But keeping stock gains in check is the latest gross domestic product (GDP) data from China, which was disappointing. The National Bureau of Statistics reported Monday that the country’s GDP grew 4.9% in the third quarter from a year ago, missing expectations for an expansion of 5.2%. Industrial production rose by 3.1% in September, below the 4.5% expected.

Meanwhile, the yield on the benchmark 10-year U.S. Treasury note has surpassed 1.6%, its highest level since June, driven by data that show hotter-than-expected inflation (see chart). 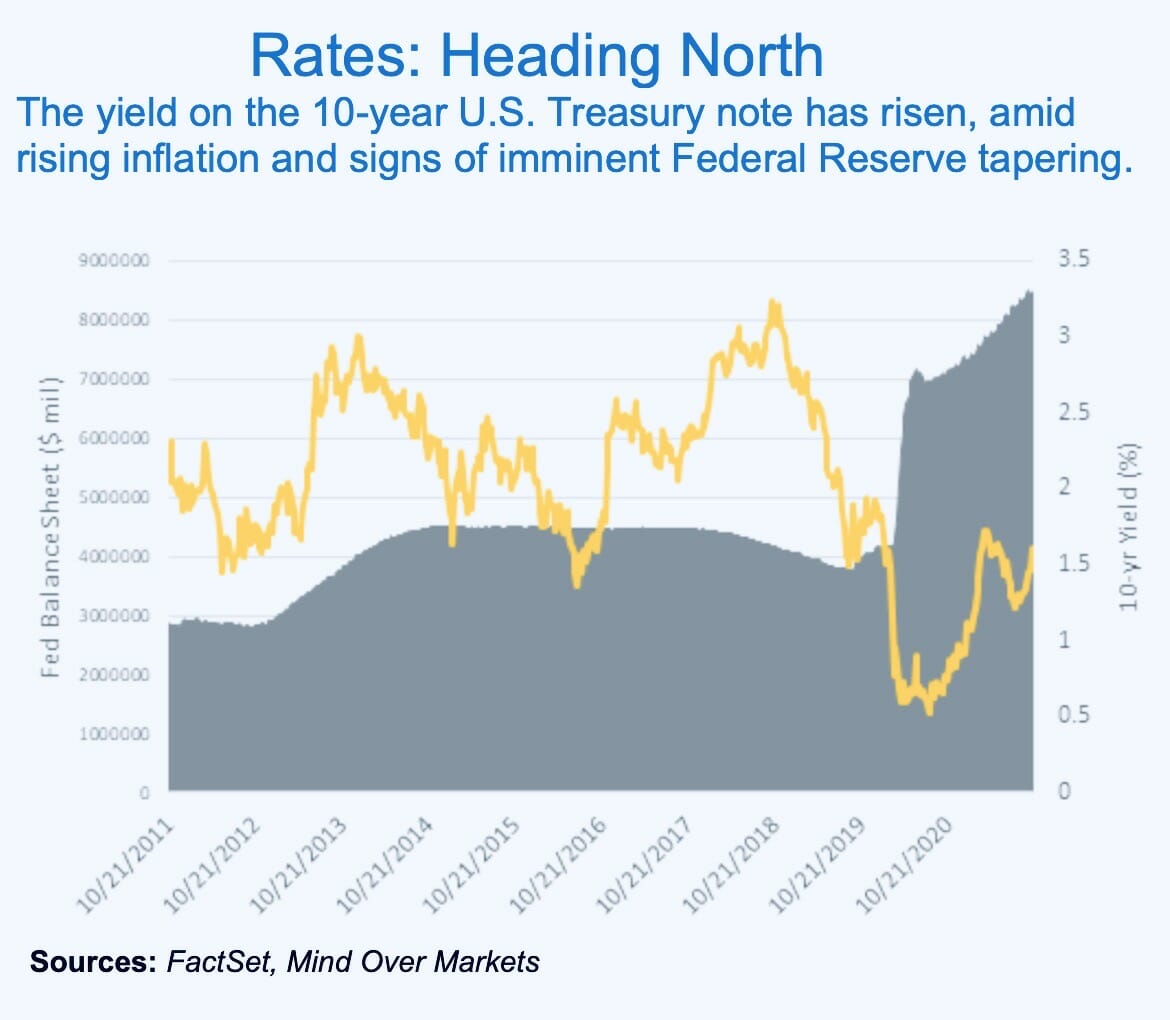 Rising inflation continues to bolster the Fed’s justification for tapering its bond buying. Wall Street expects the Fed to begin tapering as early as next month.

The 10-year yield started 2021 below 1%, so the move beyond 1.5% is significant. However, the Fed’s increase of its policy rate is still on the distant horizon, so sharply higher rates probably aren’t in the cards this year or in early 2022. The Fed’s increasing hawkishness in the coming months is unlikely to torpedo the economy and stock market rally.

That said, low interest rates have encouraged investors to take positions in the riskier part of the investment spectrum. In developed countries, a considerable amount of low-rated debt has been issued and lapped up by investors, as global stock markets reach new highs. Some assets have risen so high, they’ve lost touch with fundamentals.

Fed Chair Jerome Powell is in a tough spot. If the Fed taps the brake too soon, it may undermine advances the pandemic-battered economy has made in growth. However, if he waits too long, the central bank may not be able to contain inflation or deflate a financial asset bubble before it bursts.

What’s an investor to do? If you’re looking for new growth opportunities that aren’t vulnerable to the vagaries of monetary policy, consider the advice of my colleague Jim Pearce. Perhaps you know Jim from his stewardship of our flagship publication, Personal Finance.