Bankers Freak Out Over ‘Shrooms

Walter Bagehot, 19th century financial journalist and businessman, once said: “Adventure is the life of commerce, but caution is the life of banking.”

The inherent caution of bankers certainly comes to the fore, when they confront the fast-growing industries of marijuana and psychedelics. What would Mr. Potter or Ebenezer Scrooge have said about investing in (or taking) psychedelics? The mind reels.

Legalization of marijuana and psychedelics proceeds apace in the U.S. and around the world. These substances are achieving greater social acceptance and mainstream consumer use.

And yet…the old stigmas persist. The prohibitionists, especially in staid establishment sectors such as banking, cling to their negative preconceptions. Fifty years of propaganda from the War on Drugs have left an indelible imprint on many minds.

Latest case in point: Bank of America (NYSE: BAC), the second-largest bank in the United States, abruptly announced last week that it would shut down the account of a highly respected research institute that’s federally authorized to cultivate and study Schedule I substances such as marijuana and psilocybin (“magic”) mushrooms.

Bank of America on October 12 notified the Scottsdale (AZ) Research Institute (SRI) that it would close its accounts this week, without an explanation. A letter from the bank noted that the decision was made after “a careful review of your banking relationship” and that the action is “final and won’t be reconsidered.” 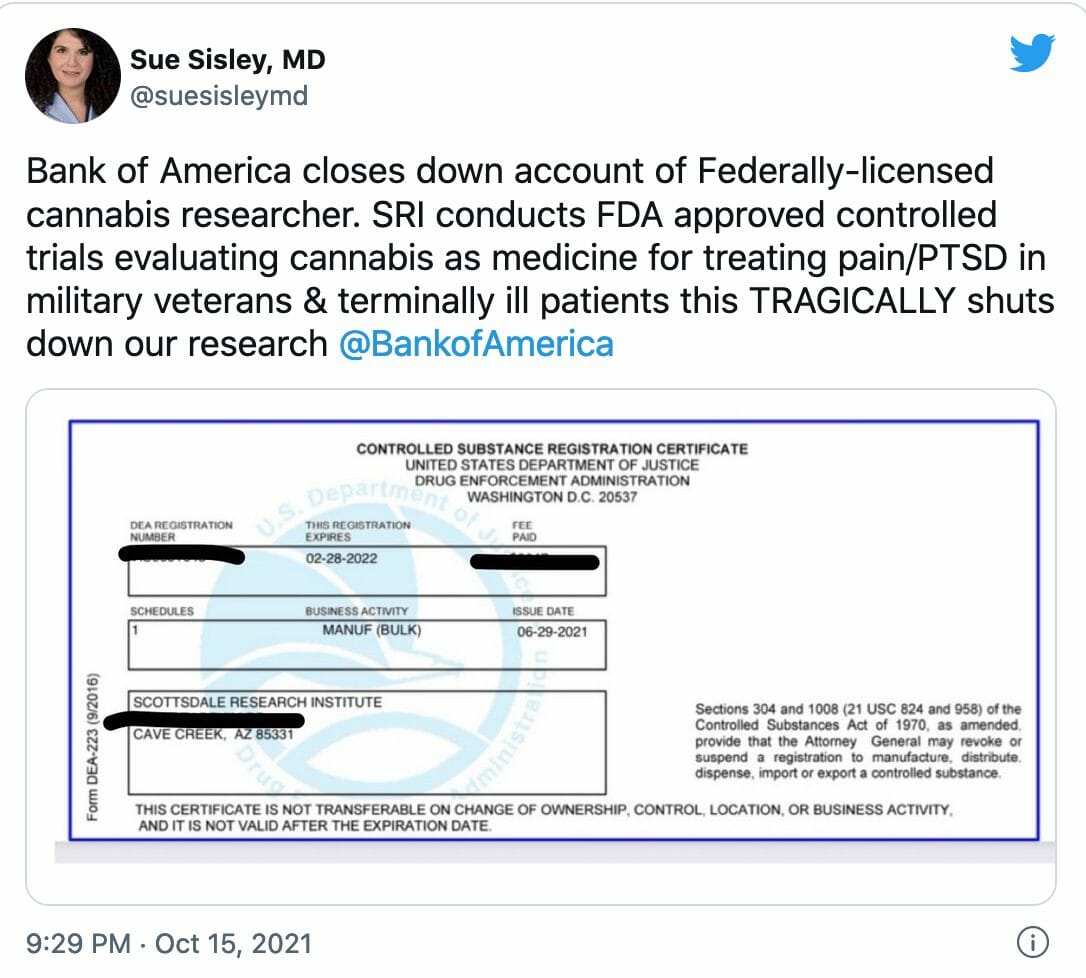 Dr. Sisley is a psychiatrist and former clinical assistant professor at the University of Arizona College of Medicine. She is active in research into potential medical uses of marijuana and psychedelics.

Sisley is a pioneer in marijuana research. In March 2014, her proposal to study marijuana use to treat post-traumatic stress disorder (PTSD) was approved by the National Institute on Drug Abuse.

She told the press that Bank of America offered “zero justification,” adding: “Maybe it was the mushrooms that freaked them out.”

Bank of America refuses to offer a reason for its action against SRI, but the consensus in the medical research community is that the bank got cold feet because of the institute’s expansion into magic mushrooms.

In May, SRI obtained the green light from the DEA to serve as one of the first new federally authorized cultivators of cannabis for research, ending a decades-long government monopoly on such cultivation. But by ending SRI’s banking services, Bank of America has hamstrung the institute.

Read This Story: The Anti-Pot Crusaders Strike Back

Bank of America’s action underscores the persistent difficulty that marijuana and psychedelics entrepreneurs encounter in getting access to financial services. Lawmakers are trying to remedy the problem.

Notably, pending in Congress is the Secure and Fair Enforcement (SAFE) Banking Act, which is designed to protect banks that accept marijuana business clients from being penalized by federal regulators.

In part, the SAFE Banking Act states: “A federal banking regulator may not prohibit, penalize, or otherwise discourage a depository institution from providing financial services to a cannabis-related legitimate business or service provider or to a State, political subdivision of a State, or Indian Tribe that exercises jurisdiction over cannabis-related legitimate businesses.”

The SAFE Banking Act already has passed the U.S. House with broad bipartisan vote, but it remains stuck in the 50-50 Senate, where social conservatives in the GOP continue to block it.

In addition to making financial services more readily available to marijuana companies, SAFE also would undercut the growing black market in pot sales and improve the industry’s financial transparency in legal cannabis states. Similar marijuana-related banking bills are pending on Capitol Hill, but SAFE is the most prominent.

SAFE is starting to garner Republican support and I believe its passage is only a matter of time. When SAFE or similar legislation gets enacted into law, the shares of publicly traded companies involved in cannabis and psychedelics will explode on the upside. The time to act is now, before the news occurs.

For our latest report on the best investment opportunities in cannabis and its ancillary industries, click here.