The Economic Tailwinds of Europe

Europe’s rapid rebound this year from pandemic-induced economic damage is a reminder that the conventional narrative is often wrong.

To this day, Europe is derided by many observers as “sclerotic” and hamstrung by anti-business policies. I still hear these tropes on cable television, and I can only shake my head.

This characterization of Europe may have been true, say, 40 years ago. But no longer.

Latest case in point: Research firm Refinitiv I/B/E/S reported on Tuesday that European corporate earnings are expected to have risen 47.6% on a year-over-year basis to 96.1 billion euros ($112 billion) in the third quarter (see chart). 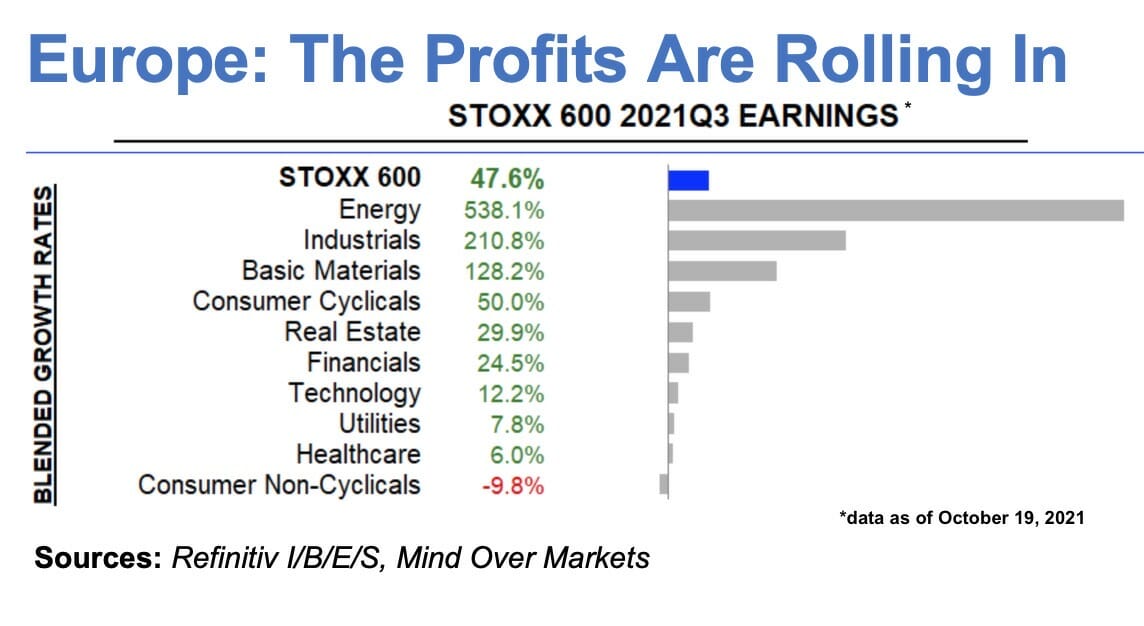 Does 47.6% profit growth seem sclerotic to you? By comparison, the S&P 500’s blended year-over-year earnings growth rate for Q3 2021 is 30%. Stellar corporate operating results in the U.S. and overseas are driving global stocks higher.

Read This Story: Dow 40K? Not So Far-Fetched

In pre-market futures contracts Thursday, the U.S. indices were taking a breather from their recent winning streak and trading lower.

As the start of 2022 looms on the calendar, now’s an opportune time to make sure your portfolio is geographically diversified, by increasing your exposure to European-based blue chips.

One common denominator between America and Europe is a loose monetary stance. Here in the United States, the Federal Reserve didn’t resort to explicitly negative interest rates as Europe did. However, the U.S. central bank has stuck to a near-zero rate policy and massive quantitative easing (QE), with more than $8.4 trillion in assets currently sitting on the Fed’s balance sheet.

The Fed’s extraordinary level of stimulus helped prop up both our stock and bond markets during the worst of the coronavirus pandemic.

Europe’s dovish monetary policies have paid off as well. The Europe Union entails sovereign states that are responsible for their own domestic budgets but beholden to a regional central bank, the European Central Bank (ECB).

Due to this political structure, the ECB has been more aggressive about its QE program. The ECB was one of the first central banks to resort to negative interest rates, i.e. making depositors pay the central bank interest for holding their money.

The idea is that negative rates will not only make credit cheaper for companies and households, they also will force banks to lend, since any return on their money is better than paying the central bank to hold it. Sub 0% rates have the added benefit of devaluing a nation’s or region’s currency, making exports more cost competitive.

Largely because of monetary stimulus, neither the U.S. nor Europe fell into an outright depression when the pandemic first clobbered the global economy in early 2020.

European stocks have enjoyed a healthy run so far this year, but many still trade at reasonable valuations. The benchmark iShares Europe ETF (IEV) has posted a year-to-date daily total return of 16.9%, versus 21.6% for the SPDR S&P 500 ETF Trust (SPY), as of market close October 20.

The most appealing European stocks right now are cyclical “reopening” plays, e.g. globally recognized brands in manufacturing (especially automakers) and consumer staples. Europe’s return to health is a good sign for the U.S. as well, because it means a stronger market for U.S. products.

Germany, the Continent’s growth engine, held a national election in September to replace the country’s widely popular Chancellor Angela Merkel, who is retiring after 16 years at the helm. Germany’s center-left Social Democrats won the biggest share of the vote in the election and the party is currently cobbling together a coalition with Merkel’s center-right Christian Democrats and other parties.

The Germans in last month’s election opted for centrist stability, rejecting populists on both the extreme left and right. The new government is likely to represent a blend of progressive and pro-business policies. Similar political winds are blowing through Europe, to the relief of global investors.

Accelerating economic growth in Europe and throughout the world is fueling voracious demand for commodities. Indeed, we’re on the cusp of a commodities “super-cycle,” whereby raw materials trade above their long-term price trend over a prolonged period. One of the world’s most vital commodities is copper.