As the chief investment strategist for Personal Finance, I listen to a lot of “investor day” presentations. This type of event is usually held when a company is going through a major change in strategic direction that it wants to explain to investors.

Of course, the idea is to convince listeners that better performance is right around the corner. That way, they may be less inclined to bail out of the stock if it hits a little turbulence while the change is underway.

Earlier this week, I sat through what may have been the least persuasive investor day presentation I have ever witnessed. The host was Kyndryl, the inexplicable name of the company that will soon be spun off from International Business Machines (NYSE: IBM).

On November 4, Kyndryl will begin trading on the New York Stock Exchange under the symbol KD. Kyndryl will consist of IBM’s managed infrastructure services unit, which companies hire to oversee their IT systems.

To be sure, Kyndryl will be a cash flow behemoth from day one. Last year, IBM’s managed infrastructure services division brought in a little over $19 billion in total sales.

Wall Street doesn’t like businesses with declining revenue streams. Eventually, the cost of running the business consumes all of the net income.

In a nutshell, that’s why IBM is divesting Kyndryl now. It is also why Kyndryl’s management team felt compelled to hold an investor day presentation to explain its strategy for growing the business going forward.

The Kyndryl call lasted more than an hour, so I cannot summarize it in its entirety. However, you can listen to a replay on the company’s website if you’d like to hear it for yourself.

Long story short, Kyndryl’s game plan is to use its considerable cash flow to buy time for it to expand its services to leverage its existing relationships. According to the company, it currently provides services to more than 4,000 customers in 63 countries.

Kyndryl’s customer list includes three-quarters of the Fortune 100 and more than half of the Fortune 500. And now that it is free to compete with IBM, Kyndryl estimates that its total addressable market will more than double by 2024.

That’s the good news about the split from IBM. The bad news is that Kyndryl will no longer have direct access to the myriad resources that IBM can bring to the negotiating table.

Despite its recent woes, IBM is still a force to be reckoned with. Even after the Kyndryl split becomes official, IBM will still be one of the largest tech companies in the world.

The day after the Kyndryl investor day call, IBM released its fiscal 2021 Q3 results. The company reported revenue of $17.6 billion, a slight increase over last year. After adjusting for currency conversions and the Kyndryl spin-off, revenue fell 0.2% during the quarter.

Although those numbers were very close to what was expected, IBM opened 6% lower the following morning. Later that day it slipped below $130, giving back nearly seven months’ worth of gains. 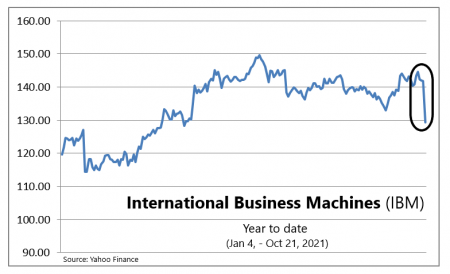 The message from Wall Street Is clear: It doesn’t like the Kyndryl story and it isn’t that excited about IBM’s growth prospects, either.

I have more than a passing interest in IBM’s performance since I hold it in the Personal Finance Growth Portfolio. I added IBM to the portfolio six years ago as a play on artificial intelligence (AI).

IBM’s AI business has not grown at the rate I anticipated, but the company’s involvement in this leading-edge technology is still a good reason to own the stock.

That said, AI now takes a backseat to IBM’s hybrid cloud business as a result of the company’s acquisition of Red Hat two years ago.

So how did I react to IBM’s quick plunge this week? That day, I bought a call option on IBM that expires in January 2023 at the $105 strike price (a call option increases in value when the price of the underlying security goes up).

I paid $26 for that option. For my trade to be profitable, IBM only needs to rise above $131 within the next 15 months.

I think IBM’s share price will go a lot higher than that. But by buying a deep, in-the-money option I am effectively leveraging the rate of return on my investment.

Suppose IBM gets back to $150, where it was trading just four months ago, by the time my option expires. If I owned the stock, my gain would be roughly 16%. Under the same scenario, the return on my call option would be 73%.

Of course, I can lose all of my money if IBM falls below $105 and never recovers but I don’t think that is likely. Sometimes the stock market overreacts to a situation and provides a brief window of opportunity to cash in.

Those are the types of trades that I am looking for with my new service, Personal Finance PRO. Every month, I issue alerts on stocks that I believe are about to surge in value.

Want to take investing to the pro level? Click here for details.