Last month I wrote an article that explained why gasoline prices are so high. The bottom line is that it’s because oil prices began a surge last summer that has led to a more than doubling in the price of West Texas Intermediate (WTI). So, why has that happened?

People love easy answers, even if they are demonstrably wrong. Today I am going to show you the right answer, and you will immediately be able to grasp it.

In January 2020, just before the COVID-19 pandemic began to sweep across the globe, U.S. oil production was at an all-time high of 12.8 million barrels per day (BPD). This was the culmination of a 12-year long production surge enabled by hydraulic fracturing.

Production remained at that level through March despite the double-whammy of a price war between Saudi Arabia and Russia, and growing demand destruction as a result of the COVID-19 pandemic. But the situation was untenable.

The price of oil eventually fell to zero and then kept going. That forced some producers into bankruptcy, resulting in the largest short-term oil production drop in U.S. history. 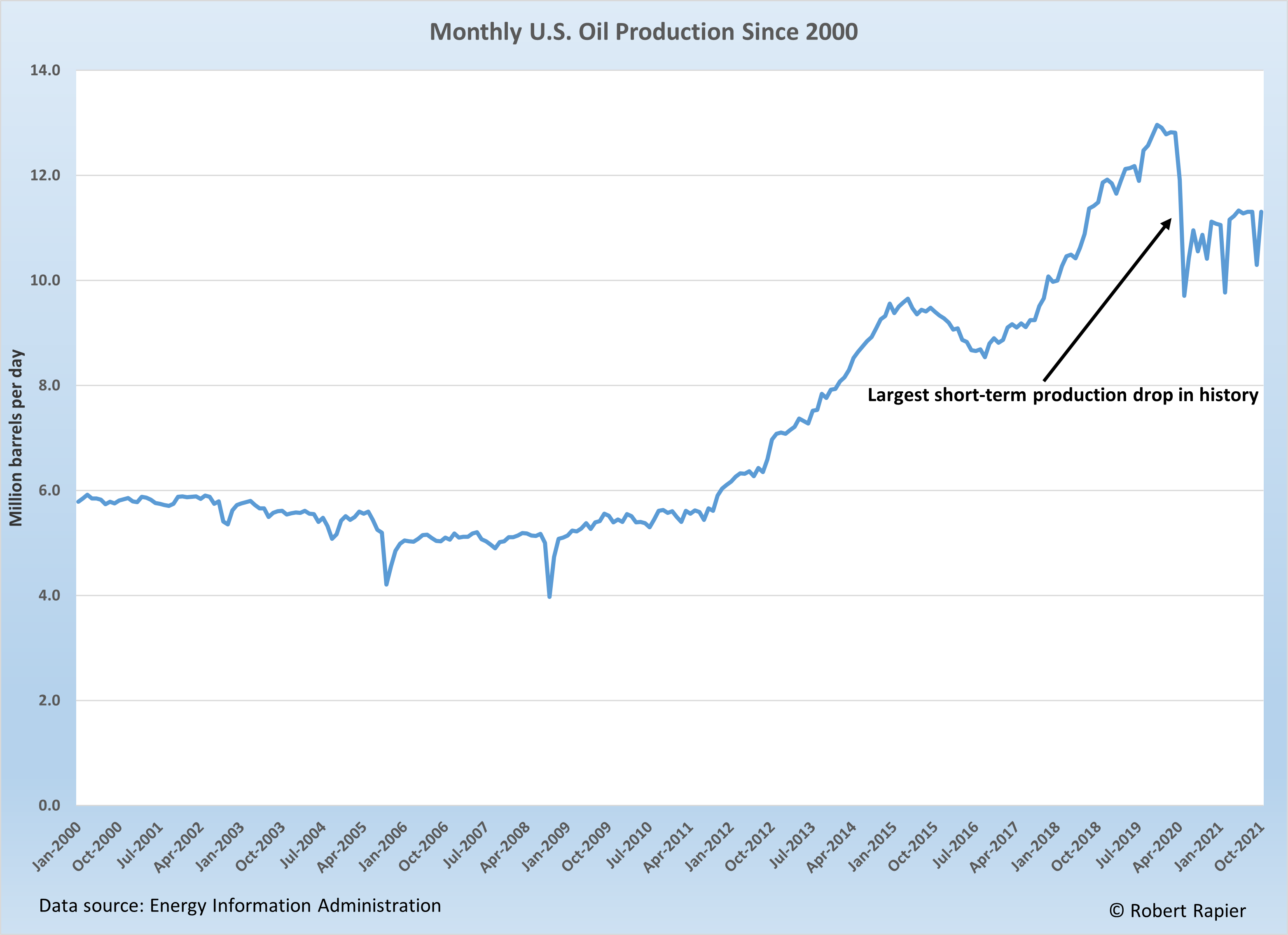 Production declined all the way to 9.7 million BPD in May 2020 (which was the month after oil prices went negative), but has since bounced back to 11.3 million BPD.

Meanwhile, U.S. oil demand has jumped back above 21.8 million BPD, which is where it was prior to the COVID-induced plunge. This loss of supply and recovery of demand is the biggest reason we have $80/bbl oil today when it was only $60/bbl just before the pandemic.

The loss of supply has caused the U.S. to lose its briefly held status as a net exporter of petroleum and petroleum products. That number had trended down from a high of 13 million BPD of imports in 2005 all the way to over a million BPD of exports in 2020. Now we have returned to net importer status, most recently importing a net average of 1.3 million BPD over the past four weeks.

But there are some signs that help may be on the way. In January 2020 there were nearly 700 rigs drilling for oil in the U.S. By the summer of 2020, that number had fallen below 200. The rig count has steadily recovered over the past year to reach 445, the highest level since the pandemic started.

The downside is that it can take months at a minimum for new drilling activity to turn into oil production. So don’t rush out and buy that gas guzzler just yet. However, if you have energy equities in your portfolio, you have benefited.

But the entire energy sector has benefited from the surge in oil and gas prices. Nearly every company in the sector has notched double-digit gains on the years, and many are up triple digits.

Editor’s Note: Robert Rapier, energy expert at Investing Daily, just described the investment dynamics of the oil and gas industry. Looking for opportunities outside of the energy patch?

Dr. Leeb is chief investment strategist of our premium publication, The Complete Investor. After nearly three decades of painstaking research, he has discovered a profit “wave” that will wash away your preconceptions about investing. Click here for details.