Nicotine: New Enemy in the War on Drugs

There’s a new War on Drugs, and it’s not against marijuana or psychedelics. It’s against nicotine.

In one of life’s great ironies, the narrative about drugs has flipped. Psychedelics were once associated with unkempt hippies who listened to trippy rock music, whereas tobacco cigarettes were smoked by all-American tough guys to the musical strains of The Magnificent Seven Theme.

Today, psychedelics are entering the mainstream as a benevolent force, and as a potential cure for the evils of tobacco addiction. The Marlboro Man is getting vanquished by the spiritual heirs of Timothy Leary.

According to the World Health Organization (WHO), tobacco kills more than 8 million people around the world each year. Research shows that nicotine is as addictive as heroin or cocaine. The WHO states that “the tobacco epidemic is one of the biggest public health threats the world has ever faced.”

On the other hand, scientists have concluded that psychedelic drugs are non-addictive. That notion seems counterintuitive, but it’s true.

Nicotine, psychedelics, and other drugs act on the serotonin receptors in the brain. But whereas nicotine exerts “reinforcing” effects that produce cravings for re-dosing, substances such as psilocybin, LSD, and mescaline do not. I could get wonkier and dive in the scientific jargon, but you get the general idea. And so does the federal government and the medical establishment.

Johns Hopkins University announced last week that it had received a grant from the National Institutes of Health (NIH) to study the potential effects of psilocybin, combined with talk therapy, on tobacco addiction.

The NIH move confers considerable legitimacy on psychedelics research. Indeed, it’s the first NIH grant in over a half century to explore the therapeutic effects of what’s known as a “classic” psychedelic.

Johns Hopkins Medicine will lead the three-year study in collaboration with University of Alabama at Birmingham and New York University. The study will be conducted simultaneously at the three institutions. The grant totals about $4 million (see tweet). 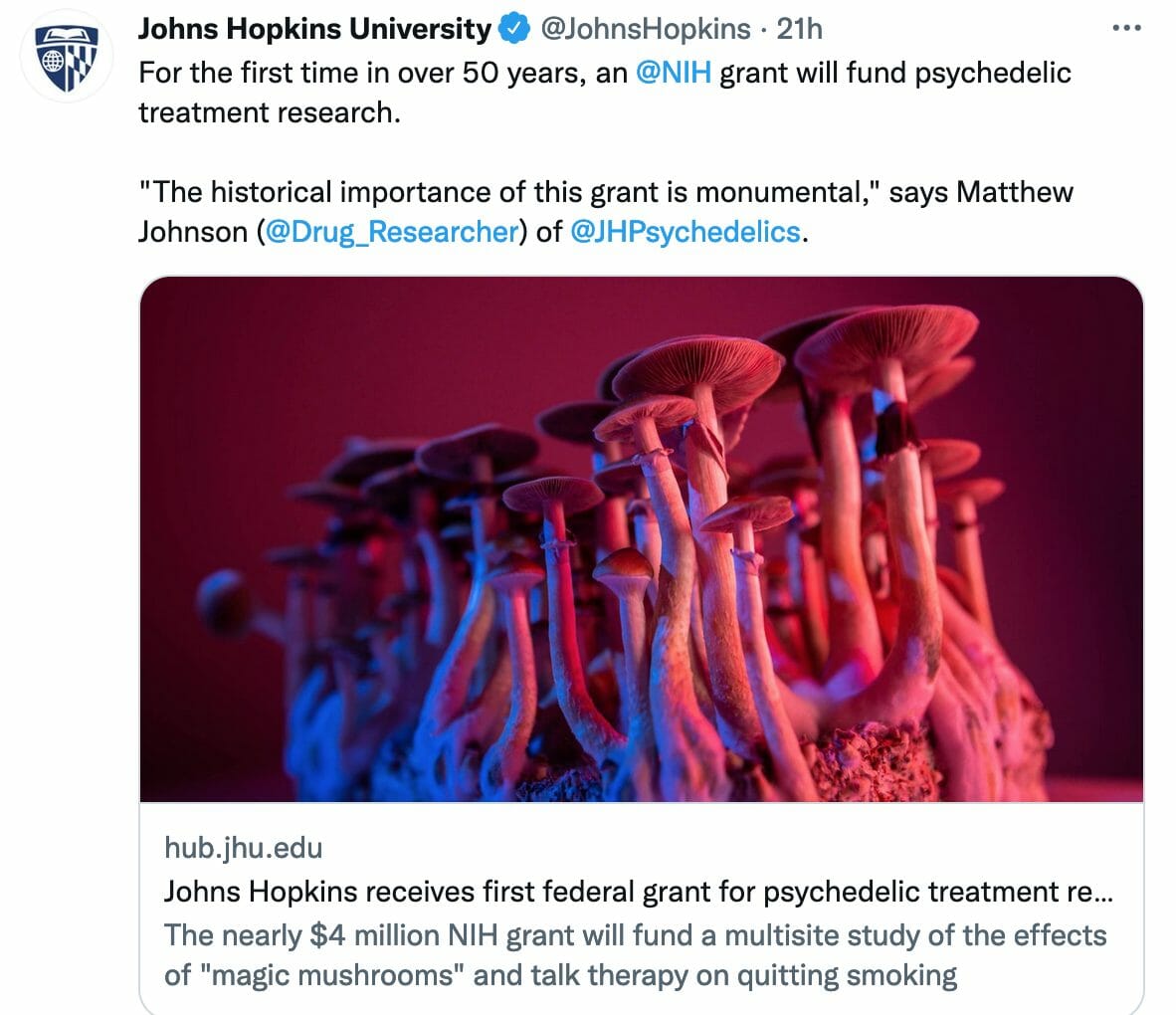 Johns Hopkins recently opened a new center for psychedelic research. The center, with $17 million from donors, aims to give psychedelic-based medicines a foothold in mainstream medicine. The center initiates research with psychedelics in what it calls “healthy, psychedelic-naive volunteers.”

In a previous study separate from the one announced last week, Johns Hopkins researchers reported that 15 study participants taking psilocybin achieved an 80% abstinence rate over six months, compared to a 35% success rate for patients taking verenicline, which is a widely prescribed smoking cessation drug.

Psilocybin, the active psychotropic ingredient in “magic mushrooms,” is a major focus of medical research around the world, for the treatment of a wide range of physical and psychological ailments. Hence the birth of a new industry that’s rife with investment possibilities.

It’s not just ‘shrooms getting all the attention. Pharmaceutical companies are forming, most of them clinical stage micro-caps, to develop LSD-based treatments for various medical challenges such as the opioid crisis.

Read This Story: Lucy in the Sky…with Profits

Just as we witnessed a legalization wave for marijuana, we’re now witnessing one for LSD and other hallucinogens.

Notably, under consideration in the California Assembly is a bill that would allow those 21 and older to possess LSD for personal use and “social sharing.” The proposed bill also covers psilocybin, dimethyltryptamine (DMT), ibogaine, mescaline excluding peyote, and 3,4-methylenedioxymethamphetamine (MDMA, often called ecstasy).

Lawmakers on Capitol Hill recently introduced a series of drug policy-related amendments to the Pentagon’s budget appropriation for 2022, including proposals to expedite research on the benefits of psychedelics for active duty military personnel.

I’m keeping a close eye on efforts to bring LSD and other psychedelics into the consumer mainstream. In the meantime, we’ve pinpointed the best cannabis investments available. Click here to learn more.

John Persinos is the editor-in-chief of Marijuana Investing Daily. You can reach him at: mailbag@investingdaily.com.